Before the white settlers arrived at Port Phillip, Aboriginals resting after the stiff climb of Oliver’s Hill, Frankston, and looking north along the bay, would have viewed the long ribbon of sandy beach shaped vaguely like a boomerang. They knew the area as Karrum Karrum, or as some of the early squatters interpreted it Garem Gam, meaning Boomerang. They also knew the swampy marshland behind the sand dunes as a rich hunting ground teeming with wild life.

Kangaroo and emu were to be found among the growth along the sand dunes, while hundreds of aquatic birds and other birdlife populated the area on or near the swamp. In addition there were large quantities of black eels squirming in the swamp’s muddy waters. The Aboriginals lived in mia mias on the banks of the Kananook where pure fresh water could be obtained about two kilometres from its entrance to the bay.

Many years later an aboriginal settlement was established by the Government at the Mordialloc Creek and the few remaining members of the Bunurong Tribe spent their last days there, still relishing the delicious eels and selling the remainder of their catch to the villagers at Mordialloc. King Jimmy, or Jimmy Dunbar, the last of the Tribe died in the Alfred Hospital during April 1877, a week after his women had died in their mia mia near the creek. 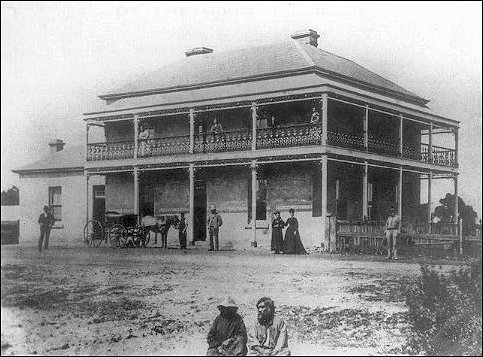 King Jimmy Dunbar and his woman outside the Mordialloc Hotel in the 1870s.

The Carrum Swamp in those days measured about fifteen kilometres from north to south, and averaged about five kilometres across from east to west, and was about eight kilometres wide at the northern end. The only high lands visible in the swamp were the Isles of Wannarkladdin, now Chelsea Heights. The swampland with its dense growth of swamp tea-tree and other vegetation was covered for the most part by the waters from the Dandenong, Eumemmering, and other smaller creeks, with a total catchment area of approximately 430 square kilometres, with the present townships of Langwarrin, Cranbourne, Berwick, Belgrave, Ferntree Gully, Olinda, Lilydale, Croydon and Ringwood roughly forming its perimeter. Some of the waters eventually flowed through marshy country to the Mordialloc Creek (Mordialloc meaning small tidal stream) or through to the Kananook which flowed into the bay at Frankston.

The Carrum Swamp together with the larger Koo-Wee-Rup Swamp made a formidable barrier against the early explorers and land seekers in the early days. For instance, to get to Mordialloc with stock the pastoralists had to travel through Dandenong via Brighton, Cheltenham, Kingston, Springvale and Noble Park, then to the outskirts of Frankston to Carrum Downs and then skirt the eastern banks of the swamp through Keysborough, a distance of 60 kilometres, and then on to Mordialloc, 63 kilometres from Melbourne.

The first survey of the Carrum swamp was made by T. E. Rawlinson, and completed by January 2, 1866. The only sign of white habitation reported by Rawlinson was a fisherman’s cottage occupied by John Watkins and his family near the present Watkins Grove, Aspendale. The survey between the swamp and the sea resulted in Mr Callinan, the State’s assistant surveyor, dividing the area into 18 allotments stretching from the Mordialloc Creek to the present Keast Park, Seaford. The land was referred to as the ‘Allotments on the Long Beach’, the first sales taking place at Semmell McCaul & Co’s Auction Rooms at Collins Street, Melbourne, on December 22, 1865. The upset price was $6 per acre. Most of the land sold went to investors, but some development did take place near the already established fishing village of Mordialloc. 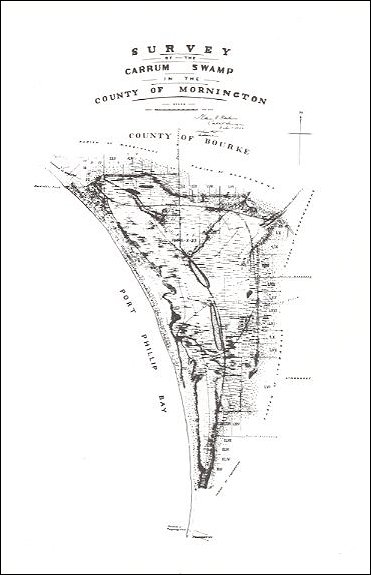 John Watkins, who had already established pre-emptive fishing rights to the land where he had built his house on the beachfront, bought his block for $50 while William Coleman bought all the land between the present Coleman Avenue, and the creek for $160. John Watkins, the son of a sea captain was a fisherman at ‘Watkins Bay’ before moving around to the Mordialloc Creek in his ‘Double Ender’ a fishing vessel which was to be well known on the Mordialloc Creek for many years to come. John Watkins had married Elizabeth Townend daughter of a Melbourne grocer. He was described by Edmund Finn (Garryowen) in his ‘Early Chronicles of Melbourne’, as ‘a fat comfortable looking grocer who long did business in a little shop at the south-west corner of Elizabeth and Collins Streets’. After heavy rain two small streams would run down Elizabeth Street to the Yarra one being known as the River Townend. William Coleman was a shearer in the early days for the squatters of the area. He had arrived in Melbourne in 1841 and was an early landowner at Mordialloc when he bought the land where he built the Bridge Hotel.

The only land sold on the swamp side was bought by Hugh Brown who built his home ‘Pine Vale’ near the site of the present Mordialloc High School which was part of his property. He was 40 years a Councillor of the Shire of Dandenong and served as President of the Shire. He was famous for his ‘Carrum’ potatoes which were sent to several States. When Hugh Brown started farming there were still wild cattle roaming the swamplands from the original squatting days of the later 1830’s to the 1850’s.

In those days stock holdings completely surrounded the swamp from the Mordiallock runs at Mordialloc, ‘Moodie Yallow’ at Keysborough, the two ‘Garum Gam’ runs and the Cardinia Creek runs, all between the Swamp and Cardinia Creek, and the ‘Ballermerring’ run at Carrum Downs, then the Banyan Water Holes. A further survey of the swamp was conducted by Hodkinson and Couchman for the Lands Department in 1868 resulting in some drainage work estimates being prepared, indicating that for an expenditure of $14,000, 11,000 acres could be reclaimed for agricultural land. However the Government of the day made excuses for not commencing the work. In 1871 the Minister for Lands said that conditions were too wet to start drainage works, and later that year a new Minister for Lands said they had decided not to use prison labor for drainage works. He considered the estimated expenditure of $21,000 un-economic and impracticable. He thought it inadvisable to sell the land by auction, and considered the best plan would be to throw the land open for selection.

In that year, 1871, the swamplands were thrown open for selection, the larger blocks of 50 acres facing the present Station Street within the City of Chelsea, and the first contract for drainage work was let to the Dandenong Roads Board in 1873. However selectors were rather slow in taking advantage of the offer; and it wasn’t until 1875 that the first sales were made. 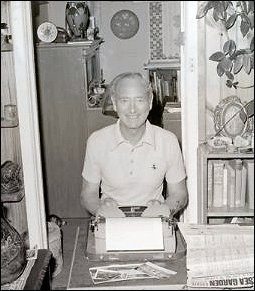