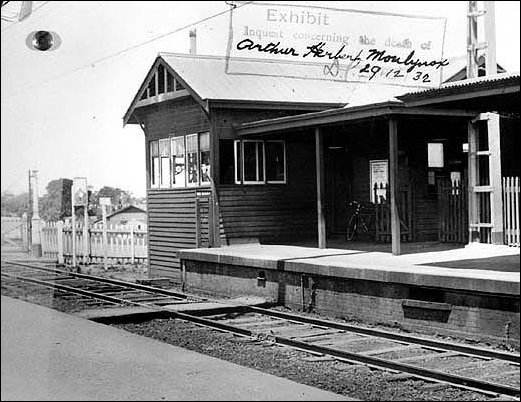 “Police constable shoots a burglar at Highett Railway Station after he himself was seriously injured. The burglar dies.”

This Highett sensational news item was reported in the Moorabbin News in 1932. [1] The final outcome of the story saw a second burglar receive a long prison sentence and the wounded police officer receive the King’s Medal for Gallantry as well as a cabinet of cutlery from a grateful community.

On the afternoon of November 25, 1932, two men, Harry Quong and Arthur Herbert Moulynex were observed as acting suspiciously by Nora Thompson outside the house of Dorothy Dickman in Highett Road. She watched them force an entry, via a window, into the house. No doubt wondering what to do she told Patrick Snelling , the local dairyman, what she saw. Snelling followed the two men at a safe distance as they walked to the Highett railway station where he alerted the stationmaster, Leopold Hunt, to the criminal actions of the two men. Hunt immediately made contact with Russell Street police, who arranged for the duty officer at the Cheltenham police station to investigate. [2]

Constable Christopher Coe, without his bicycle because of a punctured tyre, sought help at Straightway Motors, near the police station on Point Nepean Road. There he enlisted the aid of Claude Dunn, a racehorse transport agent of Collins Street, Mentone. Dunn drove him to Highett station. Stationmaster Hunt and Snelling briefed him on the situation. Coe then approached the two men who were sitting on the platform waiting for a Melbourne train, told them he was a constable of police and that he had a gun in his pocket, and he then asked them to accompany him quietly to the station office. This they did. [3] 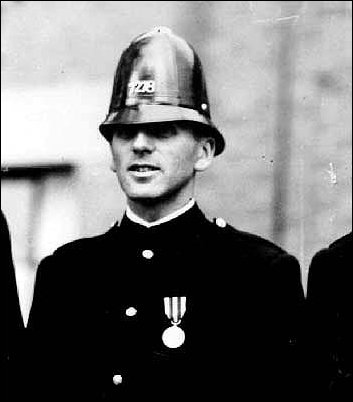 In the office Quong had his right hand in his overcoat pocket and when Coe asked him what he had there he said, “Nothing.” Coe took a step towards Quong to see for himself. As he did so Quong took several steps away but Coe grasped his hand and attempted to search him. Moulynex called out, “Let him go or I’ll plug you.” Coe released his hold on Quong and turned to Moulynex who at that instant fired his nickel-plated gun. Coe experienced a stinging pain in his hip but rushed Moulynex, grabbing him by his right wrist and thrusting the gun into the air. [4] Whilst this struggle was going on three additional shots were fired by Quong who immediately afterwards dropped the weapon and fled from the office. Coe was struck in the right arm, the shoulder and the back.

While this action was taking place in the office the railway staff were seeing to the departure of the Melbourne train. Coe continued wrestling with Moulynex, forcing him into an office near the ticket window. Claude Dunn entered the room and Coe told him to pick up the gun dropped by Quong and hit Moulynex over the head. The initial blow was not sufficiently strong enough to cause Moulynex to cease his struggle so Dunn hit him again. In the meantime Coe continued to fight with Moulynex, managing to pull the man’s arm down allowing him to savagely sink his teeth into the man’s hand causing the gun to be dropped.

Because Coe was weakened by his exertions and wounds Moulynex was able to break the constable’s grip and was about to escape when Coe picked up the dropped nickel plated weapon and fired point blank at him. The Moorabbin News quotes Coe as saying, “He struggled to his feet and hung on to the window ledge and I heard him scream out something and sink to the floor in the corner of the office. I then took an automatic revolver from my pocket, saw it was loaded and gave it to Mr Dunn saying, ‘Cover him, he may be shamming.’ I then crawled away and lay on my back.” [5] 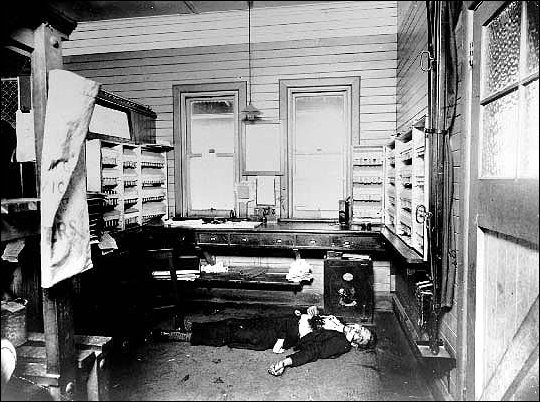 An ambulance was called and Dr Colin Joyce from Moorabbin attended. He instructed stationmaster Hunt to contact Russell Street police and inform them that Moulynex was dead. Coe was then taken to the Alfred hospital where he was x-rayed and operated upon to remove the bullets from his body. Quong was later brought by three detectives to Coe’s bedside in the hospital for identification purposes.

After firing the three shoots at Coe in the railway station office and dropping the pistol Quong fled. He was observed by Claude Dunn running in a southerly direction. It was Detective Francis Lyon who searched for Quong and eventually found him hiding in a drain at the back of sheds on the property of Mr Cayley, a poultry farmer in Graham Road. While being transported to the city watch-house Quong said, “I wish I had been shot instead of Jim. He has an old mother to keep and I have no one.” [6]

At the Supreme Court of Victoria, in February 1933, forty four year old Quong admitted to previous house breaking escapades with Moulynex and was subsequently found guilty of shooting Constable Coe with the intention of doing him grievous bodily harm and with breaking into the Dickman’s home. He was sentenced to fifteen years goal for the first offence and five years for the second. In announcing the sentence Mr Justice Mann commented on Quong’s appalling record of crime; eleven previous convictions between 1911 and 1931 in New South Wales, Victoria, Western Australia and Tasmania which drew a total penalty of sixteen years imprisonment. He therefore believed it was right to inflict the maximum penalty of fifteen years with hard labour for the shooting of Constable Coe. Later Quong appealed against the severity of the sentence but he failed in this plea. He was found not guilty of an alternative charge of wounding with intent to murder. [7]

When the community learned of the events at Highett railway station and the actions of Constable Coe, a public meeting was convened by the Shire President, Cr Bevers, at the Mechanics’ Institute at Cheltenham to devise “ways and mean of suitably recognising the conspicuous courage displayed by Constable Christopher Coe.” [8] Prior to the meeting it was established that the Chief Commissioner of Police had no objections to the proposal for it was contrary to regulations for police to accept gifts or rewards from the public without first obtaining the permission of the department. The organising committee, appointed at the meeting to finalise arrangements, proceeded to divide the district into zones and allot them to various collectors to call upon the residents there for subscriptions towards a presentation fund. Mrs W. Rose was requested to convene a meeting of the ladies of the district to arrange a suitable function at which a presentation could be made to Constable Coe. [9]

The function took the form of a dance and social at the Soldiers’ Hall in Cheltenham. The newspaper report described the event as “very largely attended.” The hall was “most tastefully decorated by the ladies of the appeal committee, the stage being exceptionally effective, with a fine array of ferns, palms and cut flowers supplied by the shire curator. With the Sunbeam orchestra in attendance the excellent music supplied with the capable services of Mr Les Cochrane as MC., dancing started early in the evening. … The main feature of the evening was the presentation of a very elegant oak cabinet containing a full set of stainless cutlery and silverware, accompanied by a wallet of notes.” The cabinet was inscribed, “Presented to Constable C A J Coe on the 8th February, 1933, by the citizens of the Cheltenham police district, as a mark of esteem and appreciation of his gallant conduct whilst in the execution of his duty at Highett on 25th November, 1932.” [10]

Responding to the presentation Constable Coe said he did not feel brave, but he did feel happy that the people of the district appreciated the efforts of the police and went on to thank Claude Dunn for saving his life saying, “It is easy to fight your way out of trouble but it is much harder to come into trouble to give a hand.” He caused some amusement amongst the audience when he commented, “In the future I will be able to look at that inscription and wonder if it means me.” [11] 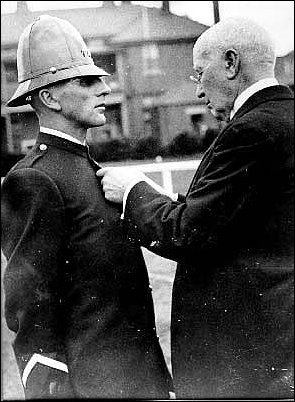 Some months later, the government recognized Constable Coe’s bravery when he became the first policeman to be awarded the King’s Medal for Gallantry, the highest award for bravery and devotion to duty in the police force. This was presented to him by Sir William Irvine, the Lieutenant Governor of Victoria , at a special parade held at the Police Depot in St Kilda Road in the presence of 400 police. [12]