The fancy dress carnival at Mordialloc in 1908 was judged a great success so the decision was made to ‘do it again’. The second and third carnivals were held on the King’s Birthday weekend in June 1909 and 1910, each following the pattern of the successful first with a parade and a sports program but on these two subsequent occasions there was a concert at night.

The parade involved a long circuit of the town with the participants processing from Joseph Organ’s Baths, and along Main Road before arriving at the sports ground. The event was witnessed by a large holiday crowd, many of whom travelled by train to the seaside town that was bedecked with flags, bunting and other decorative objects. Both businesses and private houses joined into the carnival spirit with their decorations. 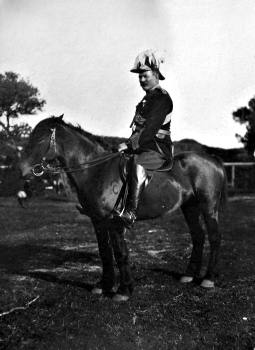 Both parades were under the instruction of the marshal, John Macartney, an imposing figure in a plumed hat and astride a horse. The 1909 parade was led by a group of Mordialloc’s pioneers sitting in a horse drawn wagon, amongst them being Messrs Dyall, Ozanne, Lambert, Major Rigg, Hugh Brown, Robert Brown, Stewart, McSwain, Davies Rusk and McMahon. Then followed a group of cadets and a tableaux arranged by J P Organ titled ‘Britannia”. The participants in the tableaux were Clarice Packer as Britannia, J Organ the admiral, Mr Ferguson a Scotchman, Messrs Weight and Price as bluejackets, and P Davies as a soldier. 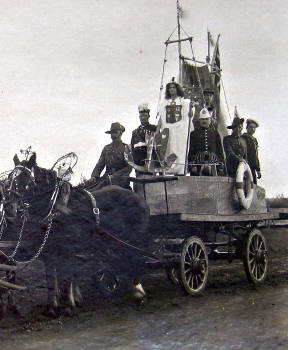 The Moorabbin Brass Band providing excellent martial music preceded various tableaux, decorated vehicles, comic characters, private vehicles and horsemen as they all moved towards the cricket ground. On arrival the youngsters were given a free bun by I Gillespie and A Cunningham of the Premier Store distributed packets of tea before the afternoon races commenced.

A number of prizes were awarded for entries in the parade. C Johnson as ‘Dolly Dimples’ won the award for the best comic costume but F Funston was given a special prize for his presentation as a ‘Red Indian. “Britannia” won the prize for the best decorated vehicle while Miss Day and Miss Phillips as “Gipsies” took the award for the Best Ladies Costume. C Stuart as a policeman won the children’s prize. 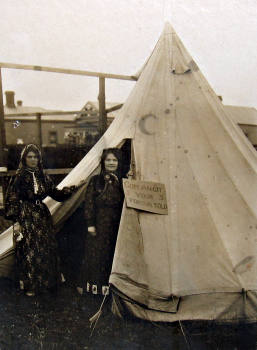 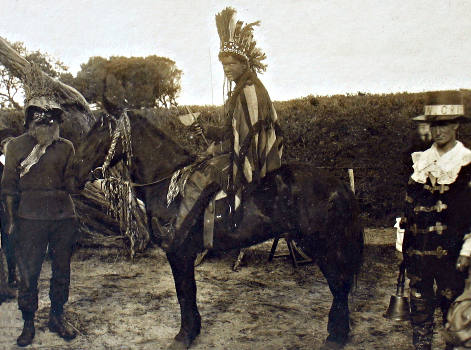 The third annual parade on the public holiday for the King’s Birthday took place in front of a record crowd. The Moorabbin Band led the procession followed by the Mordialloc cadets under the direction of Lieutenant McN Millar. Next came the pioneers who according to the newspaper report “had weathered the gale, and helped to make the district what it is today”, in their open wagon. Robert Brown, Robert Rusk, Major Rigg , Stewart and Dyall were once again present.

The pioneers were followed by several tableaux which were well received by the crowd. This year ‘Major’ Organ dressed in full regimental garb was part of the ‘Ambulance Maids” presentation where six girls were dressed as nurses. Their names were Maisy Hopcroft, Rene Lapsley, Sabina Bremner, Marion Gilmour, Gwen Jones and Frances Ramsay. A second tableau was called “At School” showed a young teacher trying to control the enthusiasm and excitement of her eleven charges. The children were Marjorie Millar, Beryl Acutt, Gipsy Droop, Enid Jones, Nola Griffiths, Nita Thomas, Valentine Tink, Tom Brownfield, James O’Brien, James Bremner and Norman Hackett. A third presentation consisting of an old coach conveying a group of rough miners was called “Off to the Diggings” The participants were Clarie Hall, Jack Maxwell, Gordon Kerwin, Jack Sager and Fred Penny. 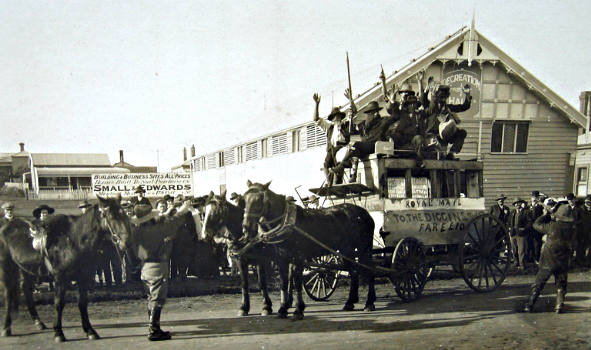 ’Off to the Diggings.’

The number of people who took the trouble to dress up as comic characters in 1910 was thought to be not as numerous as the previous two years but nevertheless those who did attracted a great deal of mirth and comment from the crowd. C Johnston once again won the prize for the lady character. This year he portrayed a newly married bride. The reporter from the Moorabbin News commented that Johnston acted in such sufficiently natural manner to be quite deceiving. [1] Nevertheless, he did not fool a small boy who at the end of the proceedings rushed up to his mother with the news that the bride was not a lady, but a man. C Stuart gained the award for the best gent’s character in his role “Order of the Bath” in a costume constructed from towels and made into a gown, with soap brushes and other items attached. Other costumes included A German Sausage, Highlander, Scotchman, Mordialloc, Bushrangers, Sunny Sam, Jack the Ass, Modern Footballer, Clown, and Huntsman. 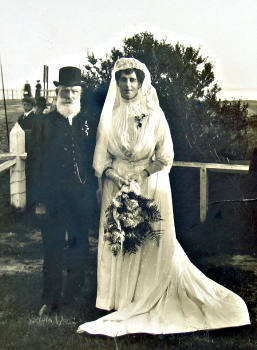 The evening entertainment took place in the hall of the Mechanic’s Institute where numerous artists presented lengthy but excellent programs. In 1909 the Carnival Glee Club sang the part song, ‘Anchored,’ and ‘Awake, Aeolian Lyre’. Percy Weight received a rousing response when he sang ‘Rule Britannia after some brassy bugle calls. Other songs, popular at the time but no longer remembered or performed kept the crowd entertained; songs such as ‘The Enchantress’, ‘Nancy Lee’, and Hanging round the corner of the street’. However, there were some that have experienced greater durability; ‘Annie Laurie’, Come into the garden, Maud’ and Come back to Erin’.

Both concerts were deemed great successes with patrons being crowded uncomfortably into the hall. There was some people who could not gain entrance and others could find only standing space. Every nook and corner, and even windowsills were packed with people determined to hear and see the performers. Advice was given to the Mechanics’ committee to enlarge the hall so that a larger group of people could be accommodated in the future. The Moorabbin News report suggested that the carnival would continue and grow bigger each year. “There seems to be no reason why in a very few years it should not be attended by ten thousand visitors from all parts of Melbourne. It will be one of the best advertisements Mordialloc could possess. The carnival has arisen out of the brotherly spirit of certain of our citizens; it stands for brotherhood and expresses the desire we all have for their innocent and picturesque merriment.” [2] 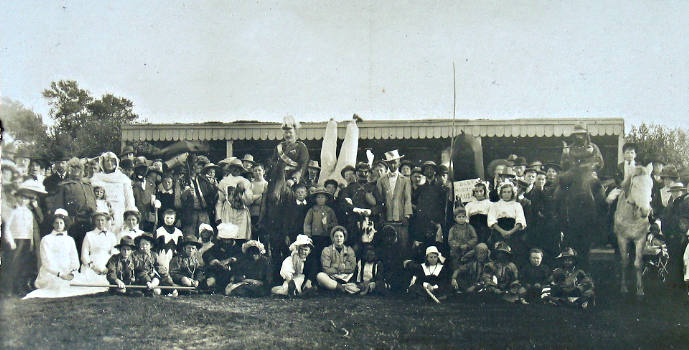 Crowd in front of shed at Mordialloc.