The seaside suburb of Mentone in the nineteenth century was the perfect setting for the establishment of a proprietary racecourse, with the soil a rich sandy loam and the advantage that horses could be exercised safely. Trainers and horse owners were eager to move to the southern coastal region of metropolitan Melbourne.

The racecourse at Mentone was operated by a public company, the Mentone Racing Company Limited, which was formed in 1888. The date of incorporation was 22 March 1888 and the registered office was at 18 Normanby Chambers, Chancery Lane, Melbourne. The capital investment was fifty thousand pounds; fifty thousand shares at one pound each. The subscriber shareholders included: E D Dyers of Surrey Hills - Estate Agent, Charles James Potts of Mentone - Solicitor, John Langtree Reilly of Melbourne - Surveyor, John Stephen Potts of East Melbourne - Journalist, Rowland Wilks of Melbourne - Estate Agent: each of these men held 2500 shares. Charles James Potts was also the company’s Solicitor.

The course was situated on 156 acres of land, half a mile from the Mentone railway station. The deed for the purchase of land from the Victorian Land Company was signed on 4 December 1888. The establishment of the railway system to Mordialloc in 1881 had encouraged subdivision of the land which led to an increase in the permanent population. This rail service provided the necessary mode for patrons to attend the races at Mentone. 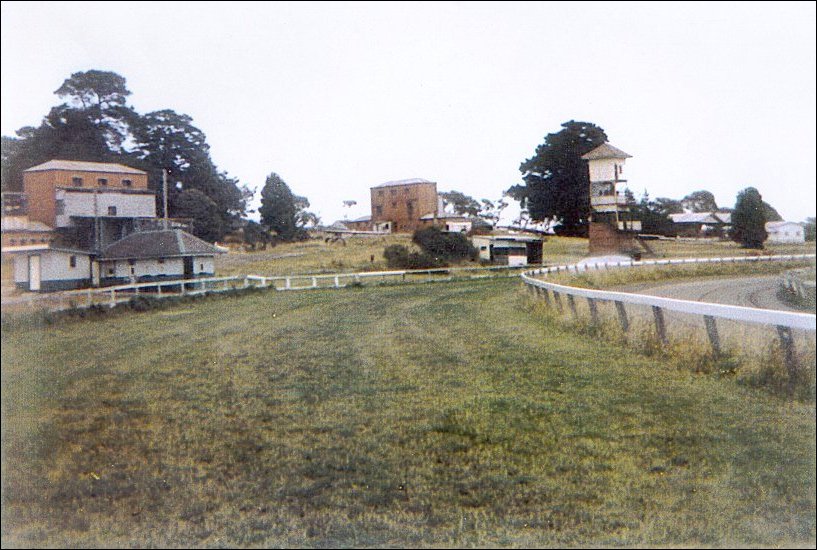 The track of the Mentone Race Course with the judges box on the right.

John Langtree Reilly was a surveyor who built the course at Mentone. In his early working life Reilly was a surveyor with the government and in 1877 he passed the examination of the Board of Lands and Works. He was responsible for the subdivision of many large estates including Mentone Heights. He also laid out and made alterations to many racecourses including Caulfield and Mentone. Reilly was to take a more active role in the administration of both Mentone and Epsom racecourses at the turn of the century. A hitching post presented to him in 1905 in appreciation of his work now stands at the entrance to the Australian Racing Museum (formerly the Victorian Racing Museum) at Caulfield.

It was a grand day on Saturday 8 September 1888 when the course was officially declared open. The feature race of the day was the Mentone Cup, run over a mile and a quarter. A report in the Age stated that the Mentone Racing Club was to hold its first race meeting on the course ‘at the pretty watering place adjacent to Mordialloc’. As His Excellency Governor Loch was to be present it promised to be a royal affair.

The racecourse was the most recent course to be established and it offered the patrons all the amenities that could be expected. A fine grandstand was built with ‘an eye to beauty, as well as comfort’, and with pleasant surroundings, the trees for shade and a good track for racing. After an inspection by the stewards and special visitors on the previous Thursday the verdict was that it was favourably sited as a racing complex, offering excellent accommodation for all those involved. The course was believed to be ‘one of the most complete to be found in Australia’. Arrangements were in place for special trains to run to Mentone and the first race was due to commence at 2 o’clock. To add to the occasion the weather was glorious. The spectators were treated to fine views of the Dandenong ranges as well as an excellent day’s racing. ‘Facing the east, a glorious view of the surrounding picturesque country is obtainable’. A feature of the course was the uninterrupted view of each race from start to finish.

The report in the Brighton Southern Cross confirmed the expectations of the patrons at the Inauguration of the Mentone racecourse. ‘His Excellency the Governor, Sir Henry Loch, with a large party, including Sir William J Clark M.L.C., [Victoria’s richest man], the Hon. M H Davies, M.L.A., and others, arrived just before two, and were greeted with a few bars of the National Anthem and a salvo of cheers’. Lady Loch was in attendance with the Governor. There was a large crowd of several thousand spectators who gathered in all parts of the course to witness the first race meeting at Mentone. The report went on to pay tribute to the ‘management and supervision exercised by the secretary, Mr J S Potts’ thanking him for his contribution to the success of the day.

The first race was the Inaugural Stakes. There were six races scheduled. These included a handicapped hurdle race and the main race of the day, the Mentone Cup. Entries for each race were high, with between sixteen and twenty horses listed. The two principal events of the day were the All Nations’ Handicap and the Mentone Cup with thirteen and fifteen acceptors respectively. Bob Ramage won the Mentone Cup on Mr S G Cook’s horse Dividend. Mick O’Brien was second on Leroy and R Walker was third on Vermont. The prize money offered for the main race was unusually high for a suburban race meeting. The gold cup itself was valued a one hundred sovereigns and the race prize value was four hundred sovereigns for first place, seventy-five sovereigns for second and twenty-five sovereigns for third. It was reported to be a most successful meeting and the weather settled in the afternoon to ‘all that could have been desired for the opening meeting’.

The decision by the V R C in 1905 to reduce the number of Victorian race meetings from 102 to 79 a year had a dramatic effect on Mentone, Epsom at Mordialloc and Aspendale racecourses where race meetings were cut to five a year. However, an extra training track was added to the racecourse in 1911 because of the number of horses training in the general district and the V R C provided one thousand pounds towards the cost of the track.

Many of the local racing men remember well the quality of the racecourse at Mentone. Bob Hoysted, a member of the well known racing family, and who trained at Mentone most of his training days considered the Mentone course first-rate.

The standard of racing was excellent and the condition of the course was considered to be top class. It was a good wet weather course because of the sandy loam which was also good for the well being of the horses. Another local trainer who belongs to a traditional racing family is Jack Besanko. Jack remembers the racecourse at Mentone well. According to Jack, who agrees with Bob Hoysted, Mentone was always a great wet weather track. Rarely were races stopped because of bad weather. The added advantage for horses trained locally was the close proximity to the beach where the horses could be exercised in salt water. Salt water, Jack says, is a natural therapy which strengthens horses’ leg muscles. The Australian Government imposed restrictions during the period of the Second World War that affected the racing industry. By 1942 the V.R.C Committee decision to limit race meetings in keeping with the Government directive was agreed to by the Mentone Turf Club, the Committee made the decision to restrict the number of races at the forthcoming Mentone Cup Meeting to only seven. However during the period (1940-1945) Mentone Turf Club continued to be viable, providing the southern region of Melbourne with numerous racing fixtures. The Mentone Turf Club made its course available to the Victorian Trotting and Racing Association (V.T and R.A) to hold the Ascot Gold Cup at Mentone on 12 December, 1942. The Commonwealth paid the Mentone Club for the use of the complex as the V.R.C refused to allow the V.T and R.A permission to race at Flemington. The Mentone course was in good condition, it was made available for use by other clubs which prevented the cancellation of their race meetings. Towards the end of the war the Mentone club had become involved in one of the most serious cut-backs in Victorian racing in the twentieth century.

The final race meeting was held at Mentone on 24 July 1948 and drew the largest attendance ever to the course. It was a V.T and R.A Meeting and the main race of the day was the Ascot Thousand run over six furlongs with a prize value of £700 for the winner, £200 hundred for second and £100 for third. The race was won by two lengths by Gilwell ridden by H.Badger, second was Armentier ridden by J Gilmore with Grand Gift ridden by A Burton a half a head away third.