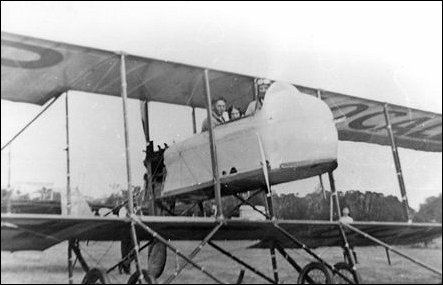 Robert Graham Carey in his Maurice Farman Biplane accompanied by his daughter Bertha and his mechanic, c1920.

In the 1930’s Bob Carey advertised flights from the Patterson River Golf Links indicating he had sixteen years flying experience and had carried over seventy thousand passengers in safety. This almost proved not to be the case for one passenger some years previously on a Sunday morning on December 19, 1920.

The local paper, Seaside News, reported intense excitement on the Edithvale beach with " the appearance of a Maurice-Farman aeroplane, piloted by Mr. R. Graham Carey. The machine landed on the sands, and hundreds of interested bathers and sightseers were quickly on the scene. Mr Carey invited passengers for flights, and Mr. H. A. Plain was the first to come forward." Mr Plain was president of the Edithvale Boat House and Life Saving Club.

Carey with spectators on the Edithvale Beach, c1920.

The reporter from the Seaside News, wrote, "to the surprise and consternation of onlookers, the machine in taking off, was struck by a breaker, and instead of keeping a straight course, ran into the sea and half-capsized in several feet of water." The Herald in its report of the event said the aeroplane was running close to the water’s edge owing to the presence of two bathers who were playing cricket on the sand.

Mr Plain, who lost his sight 30 years prior to this accident, was not hurt beyond receiving an unexpected bath from one of the breakers. On the following day he apparently declared his willingness to continue the flight which had been interrupted on the Sunday morning.

The plane was not so lucky. The undercarriage of the plane was badly smashed with damage estimated at £100. As he had a large stock of standard parts, Robert Carey was not perturbed. He expected the plane to be repaired by the following day. The Seaside News report indicated that the machine was returned to dry land, by the bathers present, where it remained for a few days while the repairs were affected.

Robert Graham Carey was born at Warrnambool in 1874. He gained his commercial pilot’s licence in 1916 after buying his first aeroplane, a Bleriot 60, the previous year. This model aeroplane was described in the Herald of September 1957 as a frail little flying machine, looking like a cross between a wasp and a box-kite, set on bicycle wheels. It was in this plane, originally brought to Australia by a stunt aviator, M. Guillaux, that Carey made the first airmail flight from Adelaide to Gawler on November 23, 1917. 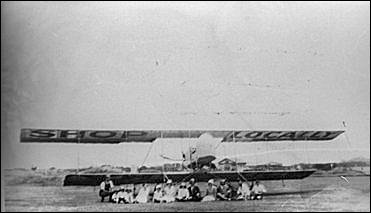 The Carey biplane on the Patterson River Golf Course, c1920.

In 1919 Carey bought four Maurice-Farman planes, former training planes, from Point Cook, and formed his own company, Melbourne Air Service, at Port Melbourne, leasing Crown land for his aerodrome, office and home. He was involved in air delivery, aerial photography, dropping advertising leaflets, and advertisements painted on his plane wings as well as providing passenger services and joyflights. The Town Clerk of the City of Chelsea wrote a letter on December 22, 1930 to the Secretary of the Air Board in Melbourne indicating that his Council had no objection to Mr. Carey of Woodbine Grove, Chelsea, distributing leaflets and other advertising matter from his aeroplane whilst flying over the municipality.

Robert Carey bought a property in Chelsea in 1924 and became a permanent resident there in the early 1930’s. He died in .June 1959 at eighty five years of age.