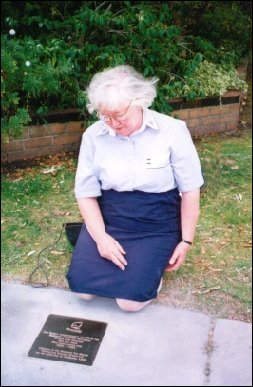 Shirley Joy by the bronze memorial plaque, which acknowledges the site of the Beaumaris Cemetery.

How could a cemetery disappear? The search for the location of the Beaumaris cemetery began with Shirley Joy’s desire to find the grave of her pioneer grandmother, Ann Addicott who came to the colony of Port Phillip in 1841 with her husband John and two children. Death records showed that she was buried in the Beaumaris Cemetery on January 18, 1863 but where was it?

Initial inquiries failed to identify the location of the cemetery so Shirley set out searching local church records, local family histories held in the municipal library and records held centrally by the Uniting Church in Australia. It was at this last location that the hand written account of a gift from Stephen Charman to the Methodist Church in 1855 provided a crucial clue. Further inquiries at the Office of the Registrar General and the Land Titles Office finally allowed identification of the site of the Wesleyan church and cemetery on what is now described as the western corner of Balcombe Road and Bickford Court. It is a location where seven modern brick homes now stand.

The church building on the site was sold in 1893 and moved to Langwarrin. The land was used then to graze cattle and Perry Bros used the site as part of their winter headquarters for their circus animals. In 1954 an application was made to the Moorabbin Council by a surveyor for a permit, on behalf of the Methodist Church Trustees, to subdivide the land. Shirley Joy writes that "Cr Everest Le Page argued that it was not appropriate to sub-divide the site as he believed there were still bodies buried there." Despite Le Page’s objections, approval was given and the seven lots of land were subsequently sold for housing development.

Shirley Joy’s inquiries at the Cheltenham Cemetery and the Department of Health and Community Services indicated that bodies buried at Beaumaris in the period 1855 to 1865 had not been moved. So she proceeded with her resolution that "their existence should never be denied nor ignored". She confirmed the burials of 28 people and subsequently verified an additional five. Undaunted she continued with the assistance of Datapoint, Family History Researchers and found a further 93 burials.

On February 22, 1998 Shirley Joy’s persistent efforts to have the pioneers buried at Beaumaris recognised came to fruition. The Mayor of Bayside, Cr Graeme Disney, unveiled a bronze plaque which commemorates the site of the "Beaumaris Wesleyan Methodist Church and Cemetery and all those who were buried here 1855-1865." The plaque is set into the footpath at the corner of Balcombe Road and Bickford Court, Beaumaris. 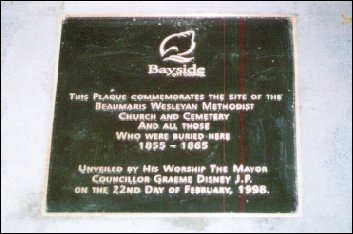 Bronze memorial plaque which acknowledges the site of the Beaumaris Cemetery.

The names of the people buried there (listed below) include families prominent in the history of Kingston; they include Bruton, Charman, Goldstone, Le Page, Meeres, Moysey; Penny, Rose, Rout, Ruse, Tuck, and Whorrall. Shirley Joy in her book The Search for the Beaumaris Cemetery gives additional details of interest to local and family historians. Information on the age, cause of death, and parents of the deceased is also given together with details from some inquests into cause of death.