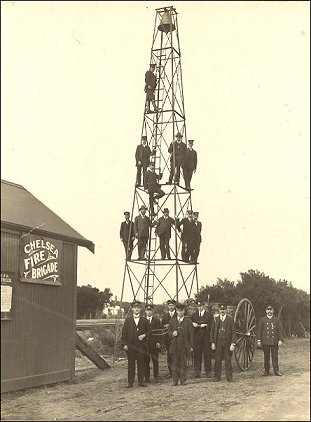 The expansion of permanent residents from the turn of the 20th Century in the beachside suburbs south of the Mordialloc Creek, led to the local residents’ keen desire to establish local fire service units, a the nearest Metropolitan Fire Service was some distance closer to Melbourne.

After public meetings in 1912 three volunteer brigades were formed. One was at Aspendale, a second at Carrum and the third at Chelsea. The suburb of Edithvale at that time was part of Aspendale.

Equipment was purchased by each Brigade from its own fund raising activities and from citizens’ donations. Prior to the purchase of motorised fire vehicles (Chelsea 1926, Carrum 1934) the early brigades equipment consisted of a hose carriage, ladder, hoses, beaters and buckets.

The hose carriage drawn by a team of brigade members carried several lengths of heavy hire hose, a ladder and sundry equipment. It was slow arduous work taking a hose carriage to a fire, particularly with the local sandy terrain and unmade streets.

Before water reticulation, a fire outbreak was extinguished by either bucketing of water from the nearest tank, dam or well, or pumping from theses sources by the manual operation of the pump on the hose carriage and laying out hoses. Scrub fires were generally extinguished by the use of fire beaters, wet bags or thrashing with clumps of ti-tree or other branches.

Until 1923, the three brigades while operating autonomously did establish a local board from brigades’ captains and representatives, for the purpose of pursuing joint improvements and for coordinating fire coverage across the entire District. The board was named the Chelsea United Fire Brigades Board.

All four brigades when formed were stationed in Nepean Highway alongside the railway line and close to the respective railway stations. These early fire stations were of galvanised sheets and measured 15 feet by 15 feet. 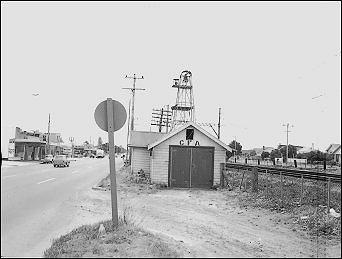 In 1927, the Carrum Brigade from years of fund raising and their own self help in the building of their new station, moved to their present day station at 484 Station Street Carrum. Over the year extensions and improvements were made to meet the brigades’ needs.

The Chelsea Brigade at the introduction of permanent officers to assist the volunteers, moved to their present fire station in 1966 at 276 Station Street Chelsea. Their previous locations were in:

1912 Nepean Highway, south of the railway platform and opposite the shops.
1927 Station Street opposite Catherine Avenue
1930 Modern brick fire station with residence at Corner of Thames and Station Street.

The Edithvale Brigade moved across the railway line in 1972 to 206 Station Street, Edithvale. Following extensive fire damage to the Aspendale Fire Station, the brigade was dissolved on June 30, 1941 with its members joining the Edithvale Brigade.

The early system to alert brigade members of a fire was by ringing a large bell. Bell towers were located in each town and would be rung to a code of intervals of tolling to indicate the direction of the fire. For example north, east, south or west. 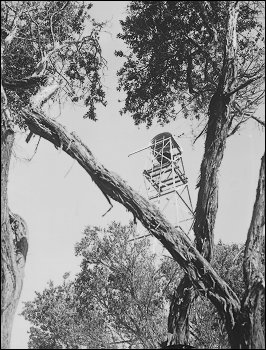 Bell Tower in Station Street, Carrum provided warnings for the Carrum Brigade for more than fifty years. The tower was originally from the Fitzroy Fire Station. 1965
From Leader Collection.

Street alarms were introduced in the 1930s. On breaking the alarm’s glass face, an alarm button could be pressed which registered on a switchboard locate4d in each brigades area. At Aspendale and Carrum the switchboards were in local shops and in the Resident Officer’s residence at the Chelsea Fire Station. The shop person or Resident Officer would ring the4 large fire bell, alerting the respective brigade members to attend their station to turn out to the street alarm and locate the cause of the alarm.

A feature of street alarms was the time given by the volunteer members checking every Sunday morning that each street alarm in their fire district was functional. Street alarms were removed when sirens replaced the large fire bells. Sirens were located on hose towers at each fire station and could be activated at each station or by the Chelsea Resident Officer who had a central phone switchboard for all incoming fire alarm calls.

Improvement in communication to the volunteers at work or home has continually improved. Today the issue of pages to volunteer members is an efficient system which includes informing the member where the fire is located or to attend the fire station. Sirens are seldom used but are retained for alerting a major disaster or as a back up system.

A scrub and foreshore fire occurred in 1900, destroying a large area of the foreshore. A thunderstorm aided the efforts of local residents to extinguish it. The biggest fire experienced by residents was on December 22, 1913. The fire started at Bank Road Edithvale and swept through the beachside to Avondale Avenue Chelsea, destroying 60 permanent homes, 100 bungalows and leaving 200 people homeless. Many holiday camps among the ti-tree were destroyed. It took some four hours of arduous backbreaking effort by the local brigades and the many residents who rallied to help to finally stop the fire on the very edge of the Chelsea shops. The task was made a herculean feat with no water reticulation, unmade streets and with the shanty nature of much of the camping and bungalow accommodation among the thick ti-tree.

Over the years, several substantial buildings have been totally destroyed or severely damaged by fire. With increasing improvements in equipment, water access and supply and speed in attending fire calls, fire losses are less and more efficiently contained. The dedication of the volunteer firefighter of today, like their forebears, are achieving high praise from Government, Council and CFA Command for the fire service coverage of their local communities.

Since becoming registered and joining the State of Victoria’s other volunteer brigades, many local volunteer members have given distinguished service in the capacity of CFRA Board Members and Chairman, CFA Chief Officer, Deputy Chief Officers and in several senior command and staff positions. At State and District fire brigades’ competitions, all four local volunteer brigade members have participated and many have achieved State and District honours. The Carrum Brigades’ achievement of being annual State Champions eleven times, ten between 1971 and 1981, is part of Victoria’s fire service history that is hardly likely to be equalled or bettered. 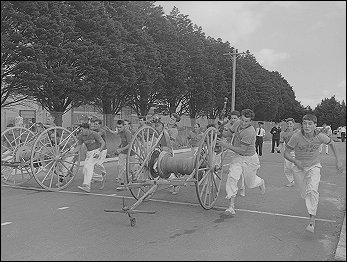 Members of the Carrum Fire Brigade competing in athletic events at Springvale 1963. From Leader Collection.