Greg Alabaster at the keyboard of the Mighty Wurlitzer in Moorabbin Town Hall, 1970.

One of Kingston’s municipal treasures is its historic Wurlitzer Theatre Pipe Organ located in the Moorabbin Town Hall.

This fascinating instrument was designed to provide the musical accompaniment for silent films.

Built in 1928, the organ was originally ordered by Union Theatres for their new State Theatre, then under construction on the corner of Flinders and Russell Streets, Melbourne.

Still standing today with its Moorish exterior complete with tower and minarets, the State was to be the largest picture palace built in Australia, proudly proclaiming 4000 seats.

The theatre’s interior followed a popular American style – “the atmospheric”. This created the illusion of outdoor settings with no formal walls, where the whole auditorium became a gigantic stage.

Based on a medieval Florentine garden setting, amid the classical statuary, trees, vines and stuffed birds stood a Venetian Palace on the left and a Roman Temple on the right. Overhead the domed ceiling was illuminated to resemble the evening sky, resplendent with twinkling stars and passing clouds.

The State Theatre opened on 23rd February 1929 with a silent film presentation (the “talkies” had not quite arrived). To provide the musical accompaniment the theatre advertised a 30 piece orchestra along with “The Mighty Wurlitzer - the largest Wurlitzer organ to leave America and the greatest instrument of its kind in Australia”. 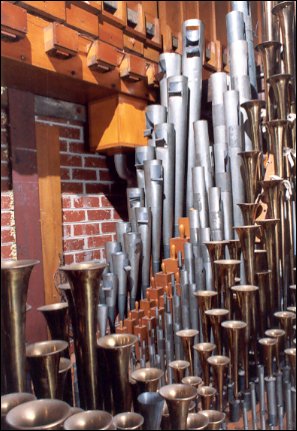 Manufactured by the Rudolf Wurlitzer Company of North Tonawanda, New York, “The Mighty Wurlitzer” was reported to have cost over £25 000, and consisted of twenty one ranks or sets of pipes, each with different tonal characteristics, along with various percussions, effects and a matching grand piano.

It was played from two separate four manual consoles located on either side of the proscenium. The main console rose on a lift at stage left while the “slave” console was permanently positioned at the right side of the stage.

The opening performance on the Melbourne State Theatre Wurlitzer featured American Frank Lanterman at the main console, with Australian organist Renee Lees at the minor console.

Lanterman from the Metropolitan Theatre, Los Angeles had been brought out specially for the opening season. Interestingly some years after his return to America Lanterman was to embark on a political career becoming a California State Assemblyman.

With four sessions a day the theatre required another organist and Melbourne musician Arnold Coleman was engaged for the intermediate session. Following Lanterman’s return to America Coleman became house organist, a position he retained from 1929 until 1940.

A featured organist with the ABC, Coleman is remembered for his regular Sunday afternoon broadcasts at the State which built up a huge following throughout Australia. He was also City Organist with St.Kilda Council from 1943 to 1953.

Unfortunately there are no known commercial recordings of either Lanterman or Coleman at the State Theatre, but Coleman did make one record on the historic Fincham & Hobday pipe organ in the St.Kilda Town Hall. Tragically this organ was destroyed by fire in 1991.

After Arnold Coleman the next organist appointed at the State Theatre was Aubrey Whelan. He had acquired considerable experience performing on the cinema circuit - one of his former posts being organist at the prestigious Regent Theatre, Adelaide.

Whelan remained at the State until 1956 and during the early 1950s released a number of recordings of the organ. Many were duets made with Melbourne pianist Laurie Wilson. These recordings are perhaps the finest representation of the organ in its original home.

With the advent of television in 1956 dwindling theatre attendances cast a shadow over the viability of massive picture palaces like the State. The organ remained in use for only another 12 months with New Zealand organist Iris Norgrove at the console. Another commercial recording was made by Iris Norgrove during this period.

Over the next few years apart from some religious services on Sundays the organ remained silent. This was also the case at the State Theatre in Sydney where regular use of the organ (the identical twin of the Melbourne State) was discontinued.

In 1962 the second console of the organ was sold privately. Not long after the high pressure water mains servicing the hydraulic lifts for the main console and orchestra pit were permanently disconnected.

Not surprisingly, by 1963 Greater Union Theatres had decided to convert the State into two new cinemas - the Forum and Rapallo
.
During this process the stage was completely re-carpeted, permanently entombing the main organ console in its pit. To add insult to injury a quantity of building rubble had fallen into the organ pit showering the organ console with bricks and masonry. The once “Mighty Wurlitzer” now lay silent amidst the ruins of its former glory.

Later that year a notice appeared in the tenders columns of the Melbourne papers - the organ was for sale.

It was purchased by Gordon Hamilton a local organist and member of the newly formed Theatre Organ Society of Australia, Victorian Division. Not without some difficulty the organ was removed and placed in storage where it remained for the next five years.

By 1968 Gordon Hamilton perhaps realising the enormity of the task of restoring and housing the organ indicated his willingness to sell the instrument if a suitable buyer could be found.

Gordon Hamilton at the keyboard at Moorabbin Town Hall, 1967. From the Leader Collection.

Negotiations between the City of Moorabbin and the Theatre Organ Society of Australia Victorian Division resulted in the Council purchasing the organ - the Society providing free labour for its restoration and installation in Moorabbin Town Hall.

It took more than 40 members of the Theatre Organ Society eighteen months working an estimated 8000 hours to complete the installation.

The opening concerts to capacity houses were performed by American organist Lyn Larsen in May 1970.

Since then the organ has been regularly played and recorded by both international and local organists. Apart from concerts the “Mighty Wurlitzer” has featured regularly at a variety of functions such as Citizenship Ceremonies, Australia Day Celebrations, Mayoral Balls and other civic functions.

In 1992 the National Trust of Australia (Victoria) included the organ on its register. Remaining substantially intact, the instrument was described as a priceless community asset of national importance and recognised as the largest original surviving theatre organ in the country.

Further recognition of its unique status occurred in 1998 when the Organ Historical Trust of Australia nominated Kingston’s historic organ to Heritage Victoria for listing and protection under State Government heritage legislation.

In commenting on the nomination, John Maidment of the Organ Historical Trust described Kingston’s Moorabbin Wurlitzer as being one of the ten most significant pipe organs in Victoria.

The organ is in fact a Model 270 Wurlitzer. Only four examples of this model were made, and of these, three came to Australia

Two identical twin console organs were purchased for the State Theatres in Melbourne and Sydney. Another minus the second console and 32’ Diaphone extension was installed in the Regent Theatre, Melbourne. The fourth with a slightly different specification was destined for England and the Trocadero Cinema, Elephant and Castle near London.

Of the three Model 270s to come to Australia only the Moorabbin Town Hall organ remains in playing condition today. Sadly the Regent Melbourne organ was totally destroyed by fire in 1946, and after suffering substantial water damage, the State Theatre Sydney organ requires extensive rebuilding.

Kingston’s Wurlitzer Pipe Organ is available for hire with the Moorabbin Town Hall. For a small hourly fee organists can also use the organ for private practice. Enquires can be made through the City of Kingston’s Arts Centre, located on the corner of Nepean Highway and South Road, Moorabbin, Vic. 3189. Telephone Vince Healy on 9556 4460. 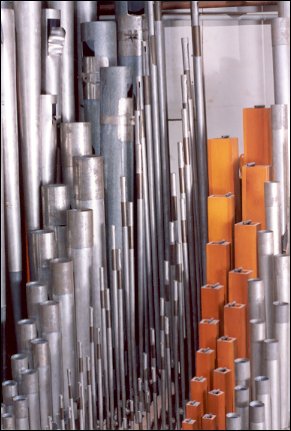 Pipes of the Mighty Wurlitzer.