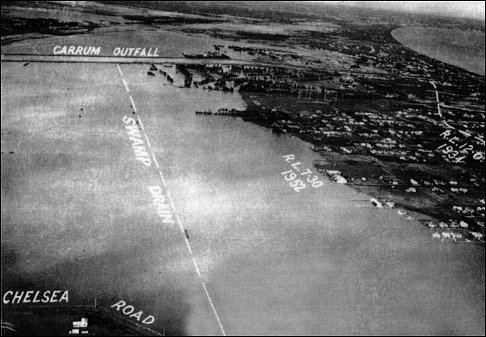 Aerial photograph of the 1952 flood compared to the height reached by the water in 1934. Courtesy Chelsea & District Historical Society.

I just got home from school and mum said, “Get those wet clothes off or your will catch pneumonia.” “How in the world did you get your socks and shoes so wet? It looks like you walked through every puddle you could find on your way home.” I’m sure she would have been hoping the rain would stop soon so that the wet clothes on the line would have a chance to dry.

It had been raining fairly solidly for 3 days now, and most of the kids at school have been getting home from school in a very wet condition much the same as myself. Whilst at school we found it exciting to get out into the vacant land behind the school and have slippery slides through the water. Many kids lost their balance and finished up sitting in the water which gave great joy to the rest of us who had not yet come to grief in that way.

There is no doubt that when many of my mates got home from school in their very wet condition, they would not be very popular as most mums would be hard pushed to find a change of dry clothes for them to wear.

Friday November 30, 1934. The rain is still falling steadily and dad has just arrived home from work and has told my two brothers and myself that with the strong wind that was blowing, the sea must be fairly rough, and he would take us in the Essex to have a look at what it was like. After dinner, we got into the car and drove to the Lifesaving Club on the esplanade at Edithvale.

We were fascinated to see what was happening. The waves were pounding at the private bathing boxes alongside the club house. We were unable to approach any closer than the top of the ramp which led from the esplanade down to the beach front. As we stood and gazed in amazement at this spectacle, a bathing box would suddenly be lifted from its position and float off on the receding waves either broken apart or in some cases still intact like a boat breaking away from its mooring.

The sea was being whipped into a fury by a strong south westerly wind and sea spray blew into our faces as we held tight to the rail of the ramp. That night, the stormy wind blew itself out over night, but we were about to face a much more devastating event than what we had just observed.

Saturday morning, dad got up for work at his usual time of 6.15; he followed his usual habit of going into the kitchen and lighting the primus stove on which to boil the kettle, and make his breakfast, before going to work.

The next thing was to get the billy of milk off the front verandah which by this time would have been delivered by the milky, whose dairy was at the bottom of our street.

On opening the front door, he received the shock of his life. There was flood water all around the house and was lapping over the front verandah step. The thought of collecting the billy of milk went straight out of his mind as he turned to wake us all. “Boys”. He shouted, “Get up, we’re flooded.” 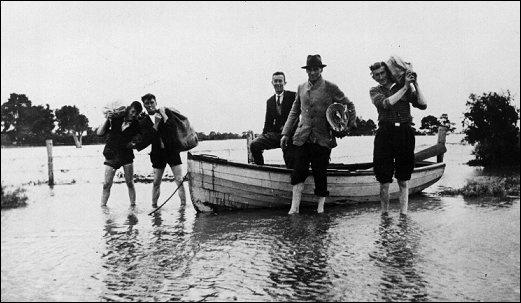 We boys slept in a back room off the kitchen. My bed was under a very small window which looked out into vacant paddocks next door, occupied by only a neighbour’s horse. My first thought was to look out of the window to see what he meant. Well, on doing so, all I could perceive was water stretching far across the paddocks which surrounded only about seven scattered houses to the east of our house.

“What about gran?”, someone shouted. We could see her house from our place and dad told my eldest brother to put on his bathing togs and they would go down the street to see what they could do for her.

Gran was dad’s mother, who lived by herself about two hundred yards on the opposite side of the street to us.

After telling my other brother and mum and I to stack any movable things as high up on top of cupboards and wardrobes as possible, he went out with my brother to try to get the car started which was parked out in the street and at this stage had water up around the engine. Unfortunately, the car would not start, so they had to wade through the cold water to reach gran’s house.

It was obvious to everyone that the water was still rising as by now it had covered the floor of our bedroom which was four inches lower than the other 3 rooms of the house. While dad and my brother were at grans, we had rolled up some lino off the floor and stood it in the corner of the various rooms from which it came. Clothes were removed from drawers and wardrobes and packed on the tops of cupboards and robes. Then when it was realised that we would need some of these clothes if we were to evacuate the house, it was decided to get the bath from the wash house and use it as a boat to transport as much as possible up the street out of the flood.

Dad has told us when he had gone out into the street to try to start the car; that the water had reached about 250 yards up the street but he could see the area beyond there was not under water at this time.

The bath was floated out of the wash house with the plug in place and taken to the side of the front verandah where it was immediately loaded with clothes and bedding. My brother then floated it up the street to where it could be unloaded and transferred to a neighbours house which did not appear to be in any danger of being flooded at this time.

Dad and my other brother arrived back from gran’s house where they had told her to remain until dad could organise some sort of rescue craft to get her and mum out without having to wade through the very cold water.

By this time the water had now reached the floor level of the rest of the house and we were now having to paddle around with bare feet trying to get whatever else we could, up to a safe height above the unknown final water level which the flood was to reach.

Dad and my brother had not been back for more than five minutes when there was a call for help from gran, who had panicked and decided to evacuate her house, so had waded out and was attempting to reach our house by supporting herself along the wire fences which ran along the side of the paddocks from her house to a cross street 100 feet from our house.

Gran, having reached the end of the fence at this cross street and finding no more fence to support her, called for help to get across the deeper sections of the intersecting gutters at this street crossing. Gran was rescued and escorted into our house, wet up to her waist. Mum and gran sat on the kitchen table and had a cup of tea as the water rose higher up the legs of the table.

I made an attempt to wade out of the flood wearing my bathing togs, however I only got to the fence of the paddock next to our house, and the water being up to my chest and as cold as it was, I could not bear the though of pressing on 200 yards or more through that icy water. So I decided to go back inside the house and wait to be picked up.

Rescue came when the milkman came past in his horse and cart, and mum and gran were carried out to the road by dad and my brothers. I waded out and also got a ride up the road to dry ground.

Having been to the beach the previous night in the storm, I was anxious to see what had happened there. So on meeting a couple of mates who also had to evacuate their houses, went to take a look. The tide was out, the sea had calmed, but there was timber floating on the sea, along with masses of other debris. There was slat foam almost a meter deep, right across the sand area which now extended right back to the fences of some of the beachfront homes.

Up at the main shopping centre, a relief committee had formed a soup kitchen where we kids were glad to get something to eat as we had missed out on breakfast, owing to the never to be forgotten flood. At the peak of the flood all that could be seen of dad’s car was about six inches of the canvas hood above the water line. When the water receded, there was mud two inches deep over the floors and putrid smelling slime caking the walls to as high as four feet. 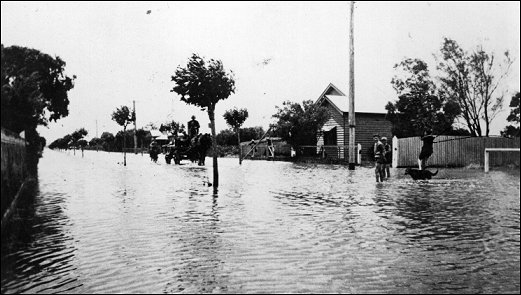 Now the clean up begins and we were certainly standing in it on the December 1, 1934, fifty-four years ago.

Although our school was on higher ground than houses to the east from whence the flood waters came, the clean up must have been a considerable task for the cleaning staff.

On the return to school by teachers and pupils, many experiences and adventures were exchanged by those who were involved in the flood of 1934.

However, the Edithvale State School No 3790 was to be hit by a more devastating disaster a few years later, when on December 31, 1940 it was destroyed by fire.

But that is another story to be told by somebody else who knows more of that unfortunate event than I.