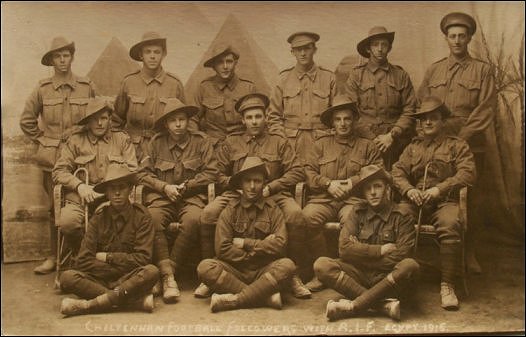 Charlie Mewett lived in Mentone and following the outbreak of hostilities in World War I, he mis-stated his age and, at 15, became the youngest Mentone recruit to join the first A.I.F. [1] On May 25, 1915, Signaller C. Mewett of the 5th Battalion wrote home from the military hospital established in the Palace Hotel, Heliopolis:

“I am lying in bed with a little scratch on my left foot which will keep me quiet for next few weeks. My luck still holds good, after what I have been through I am lucky to be alive to tell my experiences. We set sail for the Dardanelles on 24th April and landed under a terrific fire of shrapnel from the Turks, you can guess how ‘hot’ it was when only 11 men out of the first three boatloads of Australians landed. ...” 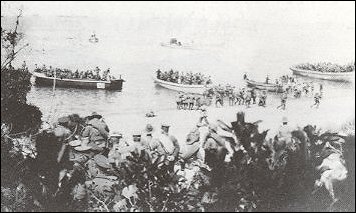 After describing the action in considerable detail he then wrote:

“I will now try and tell you how I got hit. As before, we advanced at 4 o'clock, and of course the 5th Battalion had the centre position. Well, we covered the first 500 yards safely, losing only a few men, but here the shrapnel caught us, and we suffered heavily. My pal was hit by a bullet in his cheek, so he went back, also our lieutenant was hit a few yards further on and died on the way to hospital. ... Well, we pushed on, poor fellows dying all around me. It was an awful sight. ... It was now getting dusk, and we had advanced 1 1/4 miles. We had lost hundreds, but still kept on going till we reached a part of the hill (just outside a village that was on fire, where we had to dig in for the night) and it was here that I was hit, not 100 yards from the Turks' firing line. I got up to alter my position as it was not too safe where I was lying, and they must have put a machine gun on to me, as my trousers had no less than four bullet holes in them, and one had gone through the sleeve of my coat without hitting me. Then I got this one in the left foot. I consider myself the luckiest man alive when I see some of the poor fellows here, and recall scenes from the battlefield. ... Some of the boys have lost an arm or a leg; one officer of the 6th has lost both arms. There are two thousand wounded here, including New Zealanders, Australians and Tommies.” [2]

At the onset of War, the Moorabbin News, remarked in its editorial that “throughout the whole of Europe the country is in a state of upheaval, which may take months to settle, perhaps weeks - let us hope the latter.” [3] In the next four years the Allies would mobilise more than 42,000,000 men of whom half would be casualties, including more than 4,000,000 dead. Australia, with its population approaching 5,000,000 contributed more than 400,000 troops. The Kingston area was typical. As an example, in Mentone, in St Augustine’s Church of England, two stained glass windows containing more than sixty names of members of that congregation, was consecrated on December 1917 to commemorate ‘the devotion to King and Country of those who had volunteered for service in the Great European War, 1914. The memorial included the names of twelve who had given their lives. [4] 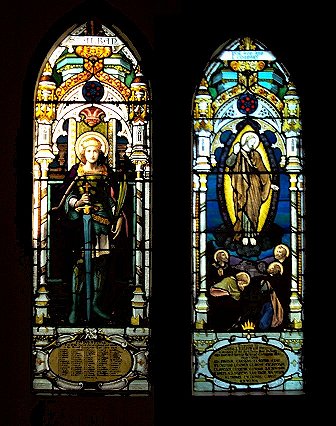 Stained glass windows in St Augustine’s, Anglican Church, Mentone placed as a memorial to those who served in the First World War.

Jack Fisher of Cheltenham had been only too well aware of the realities when he wrote from 'somewhere' on August 21, 1915:

“… I would like a spell now, 17 weeks, and it has been pretty rough. I am as thin as a greyhound. We know what it is to go without a bath for a month at a time. I did not have my boots or socks off for the first five days when we landed. We had a warm reception, but we got our own back later on when they attacked, and were going to drive us into the sea. I got a bullet through my cap, and a cut on my head the first day. ... I was the only man in our section after we went to Cape Helles.” [5]

In the latter part of the War the emphasis was on events in France, although other theatres were still in active operation. Sergeant A. Fisher of Cheltenham who enlisted in the first expeditionary forces was sensitive to this emphasis. He wrote to his relatives in mid-1917 from a hospital at El Arish in Egypt:

“A lot of pyjamas arrived,” he reported. “And they were needed, too. While they were putting a suit on a patient (one of the many just arriving) a note fell out and an orderly said to the patient, ‘Well, here you are, old man, here is a note with them’. And this is how it read: ‘To a soldier in France, I hope none of those cold-footers in Egypt get these.’ This chap had one bullet through his head, one through the groin, with six other bullet wounds, and this is the message that a lady of Melbourne sent along, so you can guess what our thoughts are. She must think we are on a picnic. I would like that lady of Melbourne to have thirty seconds of what that soldier went through.” [6]

On July 17, 1917, Leslie Canty, a former member of the Mentone Bowling Club, wrote from the Kent and Canterbury Hospital:

“I thought I would drop you a line and let you know how things are over in France. It is now 12 months since I left Victoria ... I took part in a big battle that has recently taken place ... and consider I was lucky to get out alive. It is no good looking for cover, as shells keep falling, with men dropping all around, but you still have to go on. In this stunt we took all our objectives in under two hours ...” [7]

A poem by an anonymous poet (?) suggests something of conditions in the trenches. It appeared in the Moorabbin News late in 1915

I’ve come to France prepared to shed my blood
But not to perish miserably in mud.
I'm ready to attack with might and main,
And here I’ve sat six weeks inside a drain;
While all that’s left of Bill, who took a snooze,
Is just a bayonet rising from the ooze.

Just find me out a bit of ground that’s dry
And I’ll soon show the Blooming Germans why;
But now I can’t advance against the brutes
With half a ton of France upon my boots.
Altho’ wet through, I still keep bright and cheery
Warmed by the pipe I got from Princess Mary. [8] 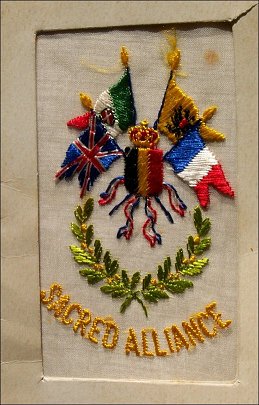 Private James Harkings was a prolific writer whose letters frequently appeared in the paper. In one, published in December, 1916, he described his embarkation for France:

“With the ‘Big Push’ in full swing and news of our comrades’ deeds of valor and heroism tingling in our ears, those of us who were still in England, and had been for some time straining at the military leash, ... anxiously awaited orders to move forward. At last the welcome news reached us on a wet, miserable day, but, although dampened materially, our spirits rose to the highest possible pinnacle. It was 4 a.m. on Tuesday, 5th. September when we prepared to cheerfully bid good-bye to England’s pretty hamlets and villages and at 6.30 p.m. the same day we set foot on the threshold of fair France.” [9]

His letter of December 12, 1916 was written after he had experienced the thrill and horror of combat:

“…One afternoon,” he wrote, “we were dodging shells. One burst within 20 years of us and splashed mud all over us. It knocked a horse spinning into a shell crater. … At this particular place ‘Somewhere in France’ there were still plenty of dead Germans lying about, or rather what remained of them. … I’ve spent two hours this morning cleaning my leggings, which were absolutely covered in mud which had dried on them, as most of the time we were walking in mud up to the tops of our boots, and in one place we had to wade through creamy mud for about a mile up to our knees all the time, and once I slipped into a shell hole with about 2ft 6ins of water in it. … The men are in wonderfully good spirits considering the terrible conditions. [10]

He wrote, in late 1917, of further experiences:

“This time I am going to tell you that after almost twelve months in an area of limited boundaries, amid the vagaries of the cunning Huns, etc., we are at last on the move to fresh fields and pastures new (I hope) although it cannot be said we are leaving much behind. There is only one regret that is being compelled to leave so many comrades, who sleep their last sleep amongst heaps of shattered chalk, desolation and ruin. Those still left point out where comrades are buried or reminiscently speak of adventures in a famous ‘stunt’ twelve months ago.” [11] 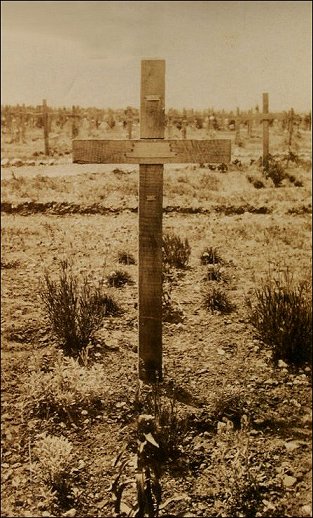 The grave in France of Ernest Le Bon of Heatherton marked with a wooden cross. Courtesy of Dorothy Allnutt.

At last, in mid-November, 1918, the Moorabbin News flashed the headline:

“From the numerous townships within our circulation boundaries we have received word of spontaneous jubilations of the people when the joyful news came through that hostilities had ceased and the European struggle was approaching finality.” [12]

In November 1918, the Moorabbin News published a list of ninety names of those from the Borough who had lost their lives in the conflict, and the same issue contained accounts of widespread functions - some involving fireworks and the beating of kerosene tins to celebrate the Armistice. In Edithvale, for instance, an effigy of the Kaiser was tried by judge and jury in the presence of a crowd and was burned at a huge bonfire on the beach. [13] Similar functions were held throughout the district. For some, the relief of the moment dulled the horror of the previous four years.

The ‘War To End All Wars’ brought out the best and the worst in men and women. The letters of servicemen play a valuable role in helping us to come to a judgement. 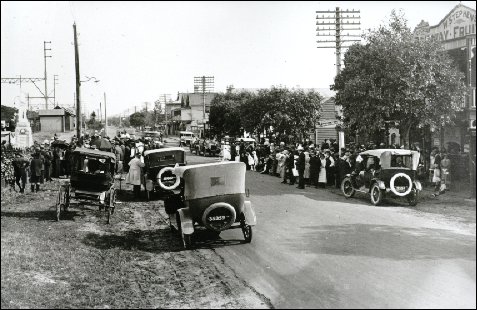 Unveiling of World War I Memorial at Carrum.