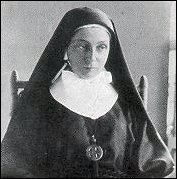 Mother Esther CHN, founder of the Community of the Holy Name died in 1931 and was buried in the Cheltenham Pioneer’s Cemetery. She was a quiet achiever in the life and ministry of the Melbourne Anglican Diocese.

Born in England in 1858 and baptised Emma Caroline, as a young girl at school she showed an ability to be a leader and she was very gifted in music and embroidery. She felt God was calling her to the Religious life and in 1884 was received as novice into the Community of St Mary the Virgin. Wantage and henceforth was known as Sister Esther. While still only a novice, Esther had a fall and after six months in plaster it was felt that a warmer climate would help her recover. As she had relations in Australia it was suggested she go to Australia for twelve months.

Melbourne was a big city with grand buildings, built with the discovery of gold, but behind the grand buildings was poverty, disease and death. In 1884 some member of the Church of England formed “The Mission to the Streets and Lanes of Melbourne”. Its was staffed by well-wishers who gave of their time generously, but as none had had any real experience of work they were to find it very difficult to continue.

In 1888 they advertised for someone to come and work full-time for the Mission and it was suggested that Sister Esther may be able to help. So in that year she began her work for the Mission and then two women came to help her. The conditions at the Mission House left much to be desired. Sister Christina, one of the first Sisters, described the living conditions: “As a Probationer I was allowed to live at the rat-infested Mission House in a room with no door to it, only a curtain and a window looking out on a Chinaman’s yard and a stable, and on the opposite side a house of ill fame, where they used to throw kerosene lamps at each other and squeal like sirens all night”. 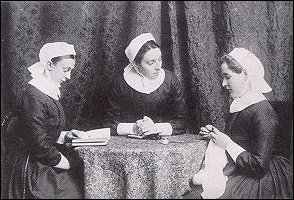 A midnight visit by the Sisters to a Gospel Hall was certainly an education. Sister Christina reported, “it was the weirdest kind of place, women off the street coming in nearly always drunk, or stupid with opium. They were given strong coffee and something to eat and every now and then a voice called out ‘will a Sister lead in a word of prayer?’ Then we all sang hymns and someone got up and asked ‘Who will sign the pledge?’ As they left Sister Esther said ‘We must think out a better way than that.’ ” And a better way they did.

Quite early in Esther’s work for the Mission she saw that a Religious Community living among the poor would be the answer to a lot of their problems. She still believed that God was calling her to the Religious Life. However, Religious Communities in the Church of England were at that time treated with fear and suspicion, so the first two Sisters were ordained Deaconesses.

Sister Esther had to wait several years before a sympathetic Bishop in Ballarat received her vows in Profession and so came into being the Community of the Holy Name. The Community was to be Australian: its roots were to be deep within the soil of this country. For Sister Esther there was to be no division of choir sisters and lay sisters, which so often happened in England. All were to work and all were to pray. She was a woman far beyond her times. She drew people for all walks of life and always expected the best of them, and received it. She encouraged many young men who were at Trinity College training for the priesthood.

As the Community continued to grow, more work was undertaken. There were no sickness benefits, no dole and pensions for the aged did not exist. Sister Esther saw the great need – a less courageous person may have felt it all too much. But not Esther. The Sisters were to get up at 5 a.m. and with the help of a couple of Scouts with a wheelbarrow, would go to the city market to buy meat and vegetables. This was made into soup and given to over four hundred men, women and children. There would be a policeman at the font door and another at the back door to make sure nobody ran around for a second helping!

The Mission undertook a building programme to respond to their growing ministries. The House of Mercy at Cheltenham (later the Retreat House) and a Children’s Home at Brighton were the first, then St George’s hospital in Kew, St Ives’ Hospital in East Melbourne and the babies; home at Darling. Later the work was to expand to hospitals and to Children’s Homes in the Newcastle Diocese.

The Community grew in numbers and respect. What had begun as mistrust and fear turned quickly to love. Sister Esther was admired by many and loved by all. The Community still has her small notebook in which she so carefully and with great pains wrote the first Rule of the Community. She began the Rule by saying “The aim and object of this Community into which these Sisters have been called, is two-fold. First, the Glory of God and the perfection of those He calls out of the world to serve Him in the Religious Life, under the perpetual vows of Poverty, Chastity and Obedience. Second, the Community has been founded for active Mission work in the Church for the honour and love of our Blessed Lord Jesus Christ.”

The influence of the Community of the Holy Name has been for the most part a hidden thing, known by so few and yet it has had a great influence on the Anglican Church in Australia.

Sister Esther died in 1931 and the beautiful Community House was built in her memory. She left behind a strong Community which has continued to offer prayer and ministry to the sick, the poor and all in need. What was started in a rat infested Mission House has grown no doubt beyond Sister Esther’s wildest dreams. She started with a few faithful women and achieved so much. 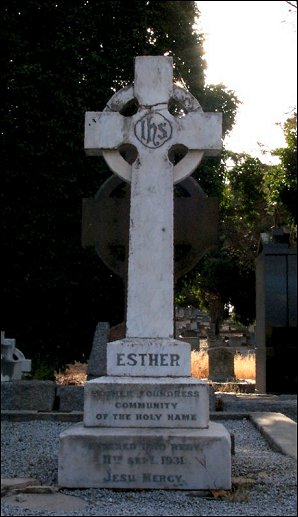 Grave of Mother Esther in the Pioneers’ Cemetery, Cheltenham.