The Bull and the Clayton Football Club 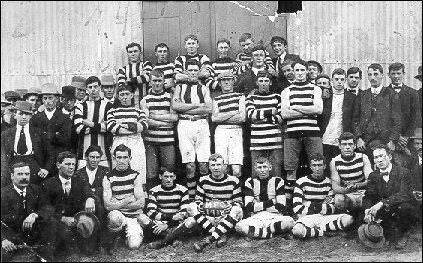 Moorabbin football players and supporters in 1912.

Perhaps the most spectacular event in the history of the Clayton Football Club took place in 1912 when matches were still being played in Crawford’s paddock. Both players and spectators had a very exciting experience.

Everyone was very proud of the local team in their new red jerseys and red stockings with their three-quarter time score of 4 goals 5 behinds to Clyde’s 2 goals 4 behinds. The central umpire, Mr . F. L. Todd, of Northcote, was about to bounce the ball for the start of the final quarter; nearly all the red jerseys of the Clayton players were around the umpire; the spectators were in a circle around the field. Then suddenly, with its head down and tail in the air, came a bull charging towards the red. One of the spectators yelled a warning - the bull was only 200 yards away. A wild scatter followed. Ladies in long dresses picked up their skirts in their hands, some half-jumped, some half-fell over an adjoining fence into a market garden, ruining a patch of cauliflowers ready for market, as they made for safety.

When the bull reached the centre of the ground the remaining players and spectators were fighting and pushing to get into the 12 foot square dressing room. The bull charged the ball which the umpire hurriedly dropped, then it turned in the direction of the dressing room. It could see the red jerseys of the local boys mingled with the sombre clothing of the others. It lowered its head, bellowed loudly and charged towards the door of the dressing room. One man had not been able to squeeze in, he remained outside ready to dodge around the small building. However, he noticed the long chain attached to the bull and thinking he could check its speed, stood on the chain. The animal was galloping along at such a speed that the man was thrown violently down. Afraid the bull would come after him, he jumped up quickly and ran for the cauliflower patch where he found safety on the other side.

The bull charged at the door of the dressing room and when its head and horns crashed against the woodwork the whole building trembled. Just on 100 people were jammed inside. The door withstood the first charge, but the bull retreated and tried again. This time the door smashed in and the bull with its nostrils distended and bellowing loudly forced its head through the narrow door-way and vainly tried to charge its helpless victims. The women screamed and some swooned.

Mr. Todd and three others were standing on the table in the room - the floor being fully occupied - and when the bull was fighting against the uprights of the door to try and squeeze in they kept up a barrage of boots, coats and everything possible to scare it away. Its tail was lashing the outside walls on either side of the door, when with everyone terrified and expecting to be gored at any time, a new terror was added. The table collapsed and Mr. Todd and other fell on top of the others. This added pandemonium to the scene. Meanwhile, the bull struggled on with its head so close to those nearest the door that its hot breath could be felt. Its bellowing was deafening.

When everyone was beginning to despair of ever being rescued, a man from the dairy came and knowing how to handle bulls was able to control it by throwing the chain around its horns and giving it violent tugs. This quietened the animal and it was led away to a more secure paddock.

An hour later the match continued, but the players had little energy left. Although Clyde managed to kick one goal two behinds in the quarter, Clayton could only kick 15 behinds. Final scores were - Clayton 4 goals 20 behinds, Clyde 3 goals 6 behinds.

(Condensed account of report in the local paper of the day)