Very little is recorded of the early history of Mentone and Mordialloc. Searches at the Melbourne Library and the Lands Department yield very little information. Occasional reference is made in the early newspapers of Mordialloc, mostly in social items, such as a popular hunt meeting at Rennison’s Hotel.

In Knight’s narrative of the visit of Prince Alfred to Victoria in 1868, humorous reference is made to Mordialloc. In the midst of a vigorous controversy between the advocates of Williamstown, Sandridge (Port Melbourne) and St. Kilda as to which should be the landing place for the Prince, ‘Melbourne Punch’ came to the rescue with a graphic sketch, showing His Royal Highness being borne ashore at Mordialloc on the shoulders of the stalwart but solitary boatman who constitutes the cost guard of that picturesque but somewhat desolate beach. 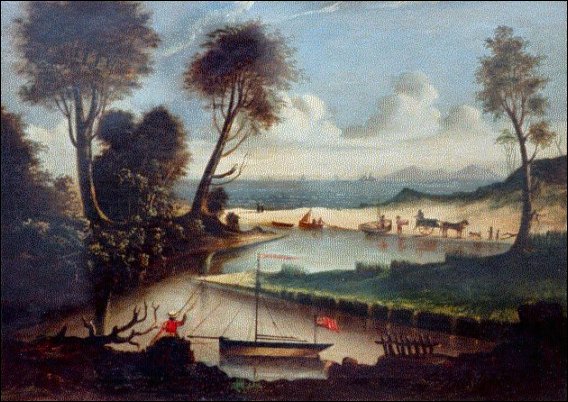 Mordialloc Creek, a painting by Petrie, 1866. Courtesy City of Kingston.

In the forties a Mr McDonald settled on the banks of the Mordialloc Creek. He was in fact the first settler and no doubt McDonald Street is named after him. He lived in a wattle and daub hut and catered for travellers in the way of supplying refreshment.

Mordialloc was originally established as a fishing village, and a firm of fish dealers named Wren Bros. built stables and men’s quarters near the Creek in the vicinity of what is now Main Street. Their business was in 1864 purchased by Messrs J Hill and W Hanneysee and later purchased and carried on by Messrs Croskell, Ritchie, & Co.

We are indebted to Mr Arthur J Hill, son of Mr J Hill mentioned above for a great deal of the information that has been obtained about the early history of Mordialloc.

The whole of the inhabitants of Mordialloc were in these early days connected with the fishing industry. They were mostly of Scotch descent and no doubt many of their descendants are still to be found in the district.

Quite a row of residences were occupied in what is now known as the Park on the bank of the Creek. One of the eyesores of the place at this time was a small cottage alongside the Creek close to the bridge on the north side held under a fisherman’s license by Johnny Pearce who reared two families there. In spite of many protests he remained there until his death (the only power able to move him).

In the early days before bridges and roads were constructed the hard sand was availed of when the tide was out. The creeks had to be forded at low tide, aboriginals acting as guides across the creek mouths. Apparently the Mordialloc Creek has always had a shallow outlet, the sand bar being carried away in floods, but soon accumulating again.

The journey to Melbourne in these days took two days. Aboriginals camped in the vicinity of the Creek for many years and apparently lived on friendly terms with the white settlers.

Boys of the district were plentifully supplied with boomerangs, young parrots, etc., as the natives seemed to be greatly interested in them.

The last king (Dermid) died at Little Brighton in 1857. He was on his return journey from Melbourne after a somewhat hot week-end.

The first school was kept by a Mrs Waugh, who used to bring half of her scholars with her from Gaelic Town (Warren Road). Mr Hugh Brown, who is still alive, was the first Secretary of the school, which was known as the ‘Common School’. The school building was erected at a cost of £100, £50 being raised by the residents while the Government gave a grant of £50.

There were two lines of mail coaches, one to Schnapper Point daily, and the Phillip Island mail bi-weekly. A bus ran daily to North Brighton station.

There was a Toll Gate on the Point Nepean Road on the Frankston side of the Creek.

Amongst the most notable residents of Mordialloc were Mr and Mrs Bloxidge who came from Craigieburn. They were quite a typical English farming couple, and had at first the Mordialloc Hotel and later the Bridge Hotel. He had a small pack of beagle hounds and was a perfect Squire whom every resident looked up to with pride. The Melbourne hounds were kept at the Mordialloc Hotel and during the winter months there was some fine hunting.

Picnic on Mordialloc Creek with the rear of the Bridge Hotel in background, 1875.

Even before the advent of the railway Mordialloc was a favourite picnicking ground, and on public holidays from early morn till mid-day there would be one stream of horse vehicles on the road from Melbourne raising clouds of red dust.

The first church building (the Church of England) near the station was occupied on Sundays by all denominations, the preachers coming from Brighton each week.

The railway to Mordialloc was opened in December 19, 1881 Mordialloc being at that time the terminus. It was continued to Frankston in July 1, 1882. 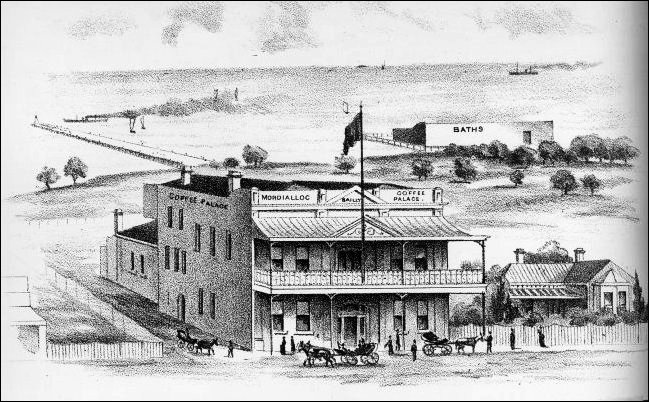 The name Mordialloc is a corruption of two aboriginal words Murdi or Moordi and Yallock, the latter meaning creek or stream. Professor Scott thinks Murdi or Moordi means flat of lying flat. Mordialloc night, therefore, be translated as ‘Flat Water’ or ‘Swampy Water’. O’Callaghan’s book on native names gives Moordi Yallock as meaning ‘Near the little sea’. Mordialloc may mean swamps near the sea. 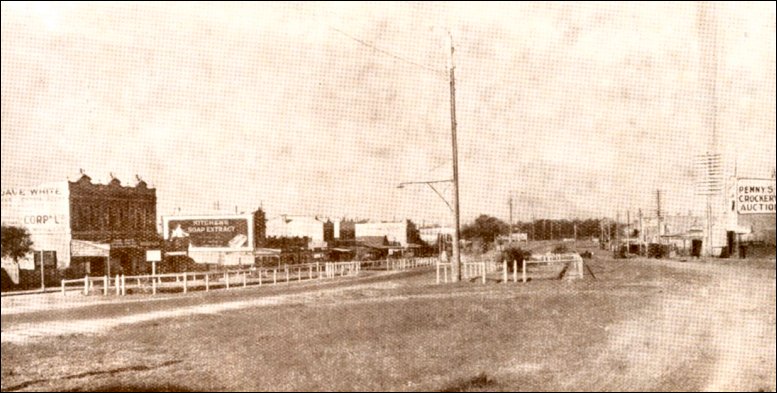