Early Days with the Victorian Railways

J. H. McCarthy was a railwayman. He recorded some of his early memories as a Chelsea resident and employee in the Victorian Railways in a paper which was published by the Chelsea and District Historical Society c1976 The following are extracts from this paper.

"I commenced work at the Cheltenham Post Office at 12 years of age in 1902 and was paid at the rate of Two Pounds per month. At 14 I joined the Railways as a lad porter at 2/- per day. Employment was hard to get and to qualify for a Lad Porter it was necessary to pass: Board of Selection, Medical, Eye & Ear, Educational, Survive ballot, before being appointed to the permanent staff. No uniform was provided, but if you desired to purchase one it was made to measure at Lincoln & Steward for 28/4 - 3 piece- buttons and all.

The suburban train carriages were small and many had fixed windows, only the one on the door was moveable. The seats were hard and straight-backed. There was on carriage that intrigued me as a lad - (there were not many of them). It was the rear carriage of the train, and the back portion of it was reserved for the Guard. The rest was called a saloon car. It was a second-class smoker (men only) about 15 feet long, It had a seat against each of the four walls. Let into the floor were two spittoons. I never saw a man rise from his seat when he wanted to use them. All smoking compartments, suburban and country, had spittoons let into the floor, cleaned by hand and polished with brass polish.

In 1907 I was transfer to Sandringham…On Boxing Day 1908 I was on duty at Sandringham and passengers were arriving in hundreds all through the day, the total number ran into thousands. When evening came they all wanted to go home about the same time. We had a staff of 8 porters, a shunter, signalman and office staff. The crowd packed the platform and for 50 yards outside the Station. A train would arrive empty, fill and depart within a few minutes, but it seemed to make no difference to the numbers waiting to travel. No one could board the trains at Hampton as they were already packed. So, they had the bright idea of boarding the train on the down platform and so, they arrived at Sandringham already full. Much confusion resulted, and I remember one man in helping a lady he did not know, took charge of her baby. The man was hoisted into the train and the mother left behind. They caught up with each other a couple of hours later in the Station Master’s Office at Flinders Street. All this tends to show the difficulties existing before the motor cars. 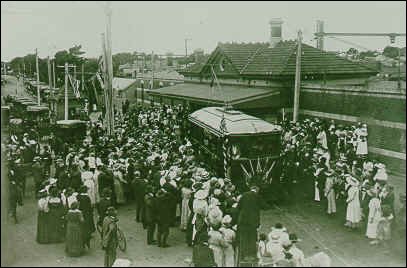 Sandringham Railway Station on the occasion of the official opening of the Sandringham Black Rock Electric Street Railway April 10, 1919.

"…in 1908 it was decided to man the Chelsea Station for the summer months. I was selected to take charge of Chelsea, in those days it was barely on the map with only one house anywhere near the station, and that was Mr. Callinan’s Combined Store and Residence where the Chelsea Hotel now stands. … Prior to all this, passengers desiring to board the train exhibited a red flag or light to the Driver, and if wishing to alight informed the guard at Mordialloc or Carrum. There was only passenger traffic at Chelsea, goods, etc was despatched from Carrum. Tons of potatoes could be seen stacked on the platform waiting dispatch and much other farm produce was received. …

‘Chelsea station at that time was busy at the week-ends, but through the week I had little to do. There were a few regulars, 3 or 4 from down at Black’s Crossing and a few from scattered camps The Strand at that time was 22 yards wide, just cleared of scrubs to within 40 yards of the High Tide Mark. The Harbour Trust took over from there, so someone cut a track through with an axe to the beach, which I had entirely to myself. There was one very nicely appointed camp just off The Strand owned by Birchenell Bros. and Porter, Estate Agents (Melbourne). Living quarters, a large tent for sales, and entertainment. It was occupied permanently by 4 or 5 very fine men. I can’t recall their names but remember Bob Williams and the two Dean brothers. 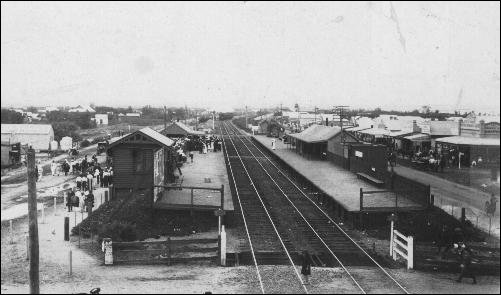 Chelsea Station opened as a single platform stopping place on the single line on February 4th, 1907. There were not points or signals. I was in charge (Lad Porter) from November 1907 to 1908, and incidentally sold the first ticket issued there. When the double line came into use on 1/12/1910, there were two platforms, but no signals. On 28/3/1914 a signal box was erected at the centre of the "up" platform, it had 10 levers. … On 13/3/1924 a new signal box with 24 levers was erected, and interlocked gates connected."