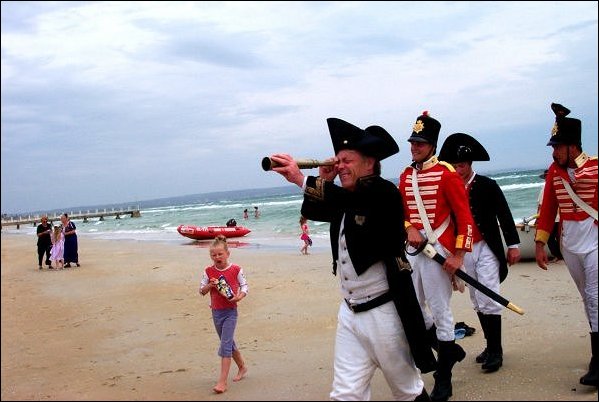 On Australia Day 2003, a small group of Kingston’s citizens re-enacted the landing of Charles Grimes two hundred years earlier on what is known today as Long Beach, Chelsea. The following notes formed the basis of a commentary presented to the spectators as they watched the re-enactment.

Charles Grimes at the age of nineteen years arrived in Sydney in 1791 to take up an appointment as Acting Surveyor General on Norfolk Island where he was to spend three years surveying and supervising the construction of the island’s roads. Returning to Sydney in 1794 he was subsequently appointed as Surveyor General of New South Wales. At the age of 30 he was directed by Governor King to carry out a survey of Port Phillip Bay and the immediate countryside, an order that was prompted by the known presence of French vessels. King was concerned the French might have ambitions to lay claim to sections of the continent of Australia already annexed by Britain.

While for hundreds of years, the local Kurran band of Aboriginals, a sub tribe of the Bunarongs, knew this area well because of the abundance of food available in the vast Carrum Swamp; eels, birds, kangaroos and emus, the first knowledge in Sydney of the existence of Port Phillip Bay was from Lieutenant John Murray who entered the bay early in 1802 and shortly after by Lieutenant Matthew Flinders.

Following the encouraging reports of Murray and Flinders on the suitability of the country, in November 1802 Charles Grimes, accompanied by Mr John Fleming whose task included examining the local plants and soil, left Sydney in the twenty nine ton colonial schooner, Cumberland, commanded by Lieutenant Charles Robbins.

After investigating King Island the Cumberland entered Port Phillip on January 20 and hoved to off what is today Sorrento. Expeditions were made on shore for several days before setting forth to survey all of the bay. During this time the exploration party, over a period of 38 days, physically walked around, inspecting streams, noting conditions in the immediate country side and returning to sleep at night on the Cumberland or to camp on the shore. 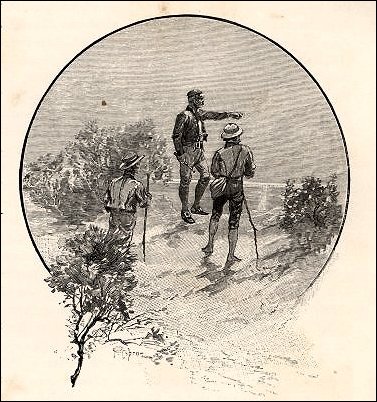 On January 30, 1803 Grimes located the Kananook Creek and while surveying the creek, met up with a band of Aboriginals who were camped upstream where there was fresh water. The following day Grimes and his party were rowed ashore, landed on the Long Beach, and walked into the hinterland where they explored the Carrum Swamp and the high ground at Chelsea Heights. James Fleming wrote in his diary that the day began with a wet morning so the party did not leave until ten o’clock. “The Captain, Grimes, self, and two mariners, went on shore; crossed a neck of land about half a mile over; went along the beach a little way and ascended a hill; the country appearing very barren. Returned to the vessel about one o’clock.” [1] Grimes himself, recorded on his maps that the immediate local area was low swampy country with open barren land. He was the first known European to actually walk on and survey the local district. 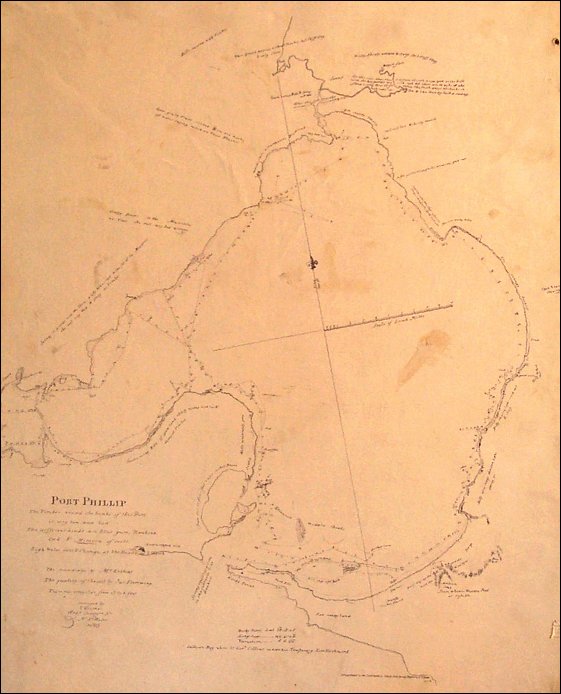 Later, the two rivers, Yarra and Maribynong were located and over three days, February 2, 3 and 4, 1803, the explorers systematically surveyed them. It was during this time that Grimes and party recorded the excellent site where Melbourne was to be founded thirty-two years later.

Grimes’ report sent to England on the nature of the country around Port Phillip was generally unfavourable. But before the information reached the government in London, David Collins was dispatched on April 27, 1803 to form a penal settlement at a place described by Murray as resembling the scenery of Arthur’s Seat and Greenwich Park , known today as Sorrento.

Following sixteen months leave in England Grimes returned to Sydney from where he was sent to survey the Tamar and Derwent rivers in Van Dieman’s Land. Subsequently, as a friend of John Macarthur he became involved in the Bligh Mutiny, was appointed Judge Advocate and Notary Public, the latter position enabling him to perform civil marriages. Returning to England in 1808 he gave evidence at the Bligh Inquiry and lost his pay for participating in the mutiny. Following two years in England defending his position, he finally resigned as Surveyor General in New South Wales in 1811. In 1812 he was appointed Paymaster in the army. He saw service in the army in Canada, Great Britain and India before retiring in 1848. He died in 1858 aged 86 years at Gravesend in England. [2] 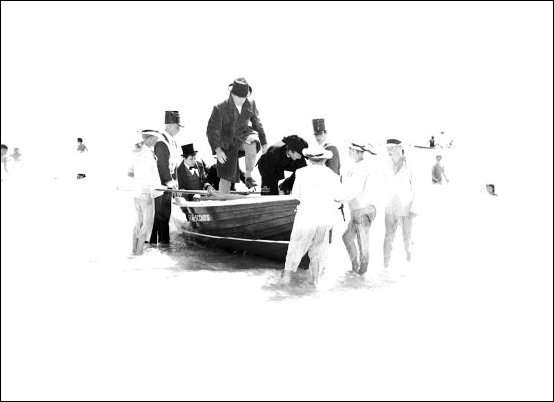 The 1965 re-enactment of Grimes landing at Long Beach. John Green as James Fleming is first out of the boat, Allan Coombes plays Lieutenant Charles Robbins, and Ian Heathy seated at the back of the boat is Charles Grimes. The marines and sailors were 4th Chelsea Sea Scouts. Courtesy, The Leader Collection.

In 1965 during the Australia Day celebrations members of the Chelsea community re-enacted the landing of Charles Grimes on Long Beach. This locally important historical event was commemorated again in 2003, two hundred years after it originally occurred. The arrangements were planned and organised by the Chelsea and District Historical Society with support and assistance from the Chelsea Life Saving Club, Rotary, Chelsea Traders, Scouts, Aspect Theatre Group of Aspendale and the City of Kingston. 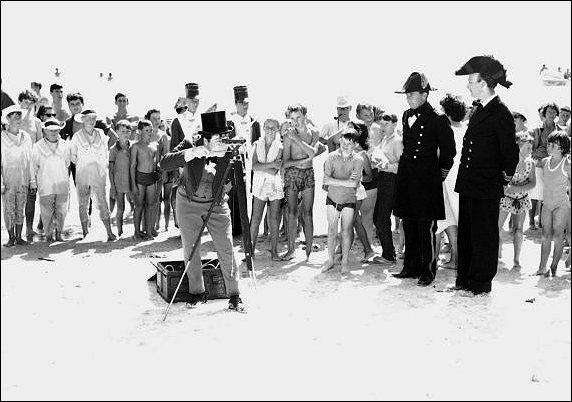