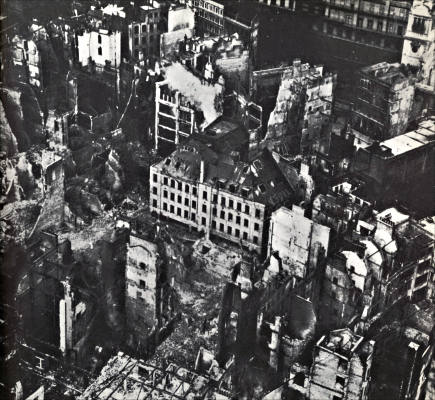 With the outbreak of war with Japan the Prime Minister, Mr Curtin announced that the efforts of the whole community would be directed more and more to the essential needs of the war. To ensure that this happened a series of regulations were implemented under the National Security Act. These regulations concerned the employment of women, holidays and annual leave, housing for war workers, rationing, war damage to property and other matters. [1]

A War Damage Commission was established to administer the scheme of insurance set out in the Regulations and was given the task of collecting contributions towards the cost of the insurance and of assessing and paying claims made against the fund. The scheme was compulsory for all owners of property over a certain value and voluntary for others. The Commission continued to work until October 1, 1948 when it was dissolved and its powers and functions transferred to the Commonwealth Treasurer. [2]

Municipal councils were required to collect the compulsory payments from all property owners where the fixed property valuation was £50 and over. The amount payable was based on four shillings for each £100 of valuation. For the money they collected on behalf of the Commission the local council was reimbursed one shilling and three pence for each property assessment. To manage the actions at the local level the Council was required to appoint an Advisory Panel consisting of the Mayor, Engineer, a leading Architect with valuation experience, a member of the Commonwealth Institute of Valuers or a competent builder. The committee could co-op not more than two responsible citizens. The executive officer for the panel was to be appointed by the Commission but until this person was nominated the Town Clerk was to act in this role. [3]

At Chelsea the Chairman of the panel was the Mayor, Cr E R N Charles J.P. and the Engineer was J H Varcoe. The executive officer was the Town Clerk, A S Collings. Their duties and that of the panel included recording any claims against the fund and ensuring they were properly and adequately assessed by suitable assessors. When necessary the panel were to take action in arranging essential temporary repairs of buildings and clearing damage from sites. They were also to provide advise to claimants and to co-operate with them without interfering with the officers of ARP services.

As Chelsea experienced no war damage or the demolition of property to hinder an advancing enemy there is no record of any claims being made by any individual or company, but the City of Chelsea did contribute to the fund. For the year 1942 valuations in the city of Chelsea were recorded at £1,427,223 and the amount collected by the Chelsea Council for the War Damage Commission was £2907. In 1943 the amount collected was £2903. [4]