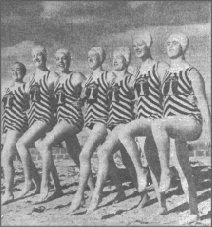 In the early nineteenth century many people in England rarely bathed but when they emigrated to the colonies they were quick to change their habits reports Bate (1983:80). "The Yarra became such a favoured bathing place in Melbourne that a law had to be framed to protect public decency, forbidding bathing close to the town between the hours of 6 a.m. and 8 p.m." Palmer’s Baths and Riddell’s Baths were constructed in 1843 which were "sufficiently extensive to allow bathers indulging in the delightful exercise of swimming."

Crosbie, the second licensee of the Brighton Hotel in the 1840’s provided ‘bathing machines’ for the benefit of the patrons at his hotel. How these constructions on four wheels were actually used was unknown to Bate, but he believed they were used for hygienic reasons rather than to enjoy swimming. The author of a letter in the Argus in 1856 wanted the scheduling of an early train because bathing in the middle of the day was both unhealthy and inconvenient.

At St Kilda the Royal Gymnasium Baths and Sea Bathing Company was formed and baths erected in 1858 at a cost of £6,500. At first managed by Leggett they passed to Michael Hegarty in 1862 and subsequently to his brother John. Three years later the Council complained about the lack of adequate screening to hide bathers from view of people on the beach. The Council also complained the bathers were not as careful as they should be. Apparently they swam out to the fences, and climbed upon piles, and exposed their nudity unnecessarily.

Concern about various states of undress persisted in the beach suburbs over the next eighty years. The new Borough of Carrum in 1921 passed a by-law regulating dress in streets and public places. It requires that any person whether in a public or private place should be "decently attired and they should not wear (except on the foreshore or reserve) a bathing costume or any other garment which exposes bare arms and/or bare legs, except such a costume or other garment is covered with a bath robe, overcoat, or coat and trousers at all times properly adjusted." Seaside News, May 21, 1921. A penalty for transgressors was a fine not exceeding 20 pounds. 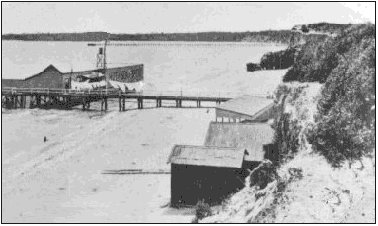 When Mordialloc became a City, the Council took responsibility for three sea baths, Mordialloc, Mentone and Beaumaris. In a publication produced in 1927 to promote the City, it was recorded, "Each of these baths have splendid swimming areas with ample dressing accommodation, whilst hot sea baths can be had at both Mentone and Mordialloc. Mentone and Mordialloc baths are lit by flood lights for night bathing. The Mentone baths have a splendid open-air café and fine dancing floor, and are very popular. All school children are admitted free at least once a week." (Mordialloc: See Our City).

Until the 1930’s mixed bathing was not allowed so a red flag was raised during the hours allocated to women and a white flag flew during the times when males were swimming. Today all three baths are gone. A fire destroyed the main timber structure of an already dilapidated baths at Mentone in 1962 and they were not rebuilt and both the Mordialloc and Beaumaris baths predeceased them. The Beaumaris Baths were washed away in the great storm of 1936.

The Chelsea Council, the successor to the Shire of Carrum, debated appropriate dress on its beaches in 1938 The councillors voted 6 to 2 to allow skirted trunks for males on its beaches. The local newspaper reported that the debate was held up while two samples, one with skirt and one without, were passed around by the Mayor (Cr R. G. Beardsworth) who apologised for his inability to stage a mannequin parade.

The decision was hailed by the members of the Chelsea Life Saving Club and the secretary of the South Eastern Beaches Life Saving Association who said, "It should be a lead for other seaside councils and I hope they will follow." Councillor Black had pointed out during the debate that trunks were worn by the King, and if they were good enough for a conservative country like England, surely they were good enough for Chelsea. Nevertheless a reporter warned, "Neck-to-knee would certainly be safe and a full skirted pair of trunks might get by in some of Melbourne’s bayside beaches". 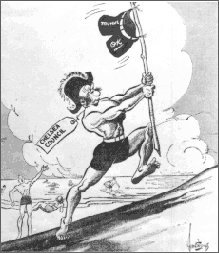 The Sandringham News January 22, 1943 reported that a Sandringham resident had asked it to register a protest against the free-and-easy way in which some bathers, clad in very meagre costumes, saunter through the shopping area. The News agreed that during the Christmas and New Year holidays, "there were some very scantily-clad persons wandering round the streets and we certainly think they would have looked a good deal more dignified had they worn bathing wraps of some kind over their abbreviated swim suits." But it went on to suggest the perpetrators of this behaviour were visitors. "Sandringham has always prided itself on its dignity, and it is safe, therefore, to assume that the wearers of the somewhat startling suits were visitors."