In his book “The Fatal Shore”, Robert Hughes describes the Blue Anchor Yard in East London as:

…narrow, dirty, and pregnant with stenches, where the houses nearly met, and seemed here and there to bulge to each other, as if they were drunk and could not stand upright. Bricks had fallen, chimneys were wanting in others, windows were replaced with rags, and in turn the rags had rotted away and turned into moist lumps of noisome impurity. The population seemed to be all outside, walking, standing, or sitting on steps. The tangled knot of children from whom childhood had been sucked out by the ascending steam of crime and disease.

It is from this squalid background and life on the East London streets that a young James Bennett was literally transported into the fledgling Tasmanian penal system with all its cruelties. Bennett suffered hardship and unimaginable punishments for most of his life and yet managed to end his days as a successful Victorian Market gardener and family man.

On 9 November 1817, 13-year-old James Bennett's life on the streets of East End London was changed forever when he was indicted for:

James Bennett was tried in the Old Bailey London on 14 January 1818. The transcript of the trial reads very much like the story of the urchin Fagin and his band in Oliver Twist. In Bennett’s case, Seymour was the leader with his band of young boys, Bennett, Duproy and Munroe. Bennett being the cocky one seems to have had a large part in the actual stealing of the property in question but there are two conflicting stories in the testimonies of Duproy and Bennett as recorded in the Old Bailey Session Papers.

In his testimony Duproy says:

“I did not know what I was going to do”. and states that Bennett said: "I will go in, and buy a half-penny worth of horehound.” "We were then opposite, Mr. Key's shop; he went in, and brought some horehound: Seymour told Bennet that there were some notes, as he had watched them on Saturday night, and saw them put them in the till, and told him to go in. Bennet said: “Is there? I will go in.” “ He pulled off Munroe's hat directly, put it on, and went in, and brought out a pocket-book, and gave it to Seymour, who was at the door. I and Munroe were walking backwards and forwards."

“I was with Duproy, Seymour, and Munroe, when Duproy took the money. He went over to the counter, and took the pocket book out of the till, and brought it out. He would not give it to any body; he took it to Seymour's, and then threw it away by the sugar-baker's ~ we all had a part.”

Thomas Farr was present when the prisoner was examined at Mansion-house and gave the following testimony:

Bennett was found Guilty - Death. Aged 13. Recommended to Mercy to be transported for life to Van Dieman's Land for stealing £20 in a dwelling house. We do not know the fate of the others but it was likely to have been a similar punishment.

At first glance, transportation to Van Dieman’s Land “For the term of his natural life” for a crime that would seem to have been not much more than a mischievous prank appears a terrible sentence but instead, by being transported to Australia Bennett achieved in his life time, success beyond the wildest dreams of a young boy from The Blue Anchor Yard, George Street, East London where he lived with his father at the time of his arrest.

James was imprisoned on a prison hulk for 5 years before being transported to Australia. It may have been have been the Bellerophon which was stationed at Sheerness or a similar hulk, the Belerophon was appropriated exclusively to the reception of boys not exceeding sixteen years of age, most of whom were not expatriated, but were taught various trades such as bookbinding, shoemaking tailor work etc. Officially, the morals of these youthful delinquents, some of whom were not more than 10 years old, were very carefully attended to. Reality may have been somewhat different, abuse of young inmates on the hulks was common. We can only guess at what James endured from the system, guards and other inmates before and during his transportation and its subsequent effect on his character. 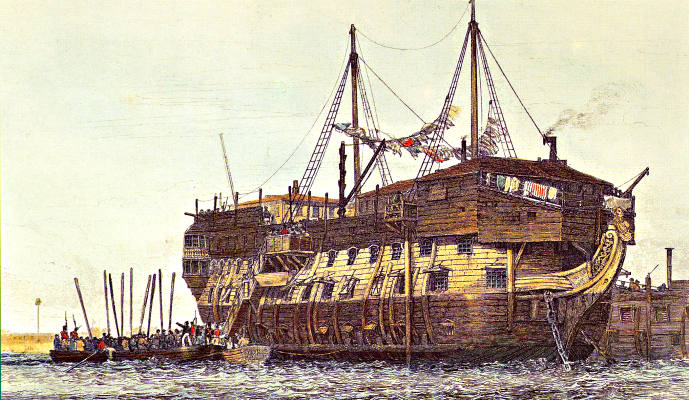 James Bennett’s gaol record reports: “A very sulky bad tempered youth and has given much trouble, was put to learn a bookbinding, but would never pay attention to it.” Who would not be sulky if locked away at the age of 13 especially when the streets of East London had been his home and the prison hulk his high school. Bennett’s signature on his marriage license and later documents is in impeccable copperplate script; it is possible he learned to write whilst learning his trade on the hulks.

After 5 years, Bennett was transported to Van Dieman’s Land on the Sir Godfrey Webster. The ship left Sheerness on 8 August 1823 in diabolical winds that made the ship very uncomfortable to sail on. It finally left the Port of London with its completed cargo of convicts (180 males in all) on 1 September 1823 under Captain Hibbert and his wife, both kind hearted Scots. The Surgeon, Mr. Charles Chanter was on his fourth trip superintending convicts to Australia. On 3 September most of the convicts had their irons knocked off. With fair winds for most of the trip the Sir Godfrey Webster arrived at Tenneriffe in the Canary Islands, and stocked up with supplies. The ship left on 28 September and sailed for 3 months around the Cape and direct to Hobart Town.

In the diaries of G.T.Boyes a passenger on the ship, it states:

“On the 27th December at 4am in the morning, land was sighted. An extraordinary morning, the clouds were rising in all forms and colours, one could not look on such a Sky without deep emotions. It seemed to indicate that some great event as the rays of the rising sun could be seen faintly piercing through the dark watery & threatening clouds. All language however must be inadequate to describe the general effect. Passed Pear Blanca - the Eddistone, Tasman's Head, Cape Frederick Henry and down Storm Bay with the Sir Godfrey Webster anchoring at Hobart Town on the 27th December 1823 after all formalities were carried out the convicts disembarked on the 30th December 1823 and were immediately assigned out”.

The trip took 144 days from the port of London to Hobart. 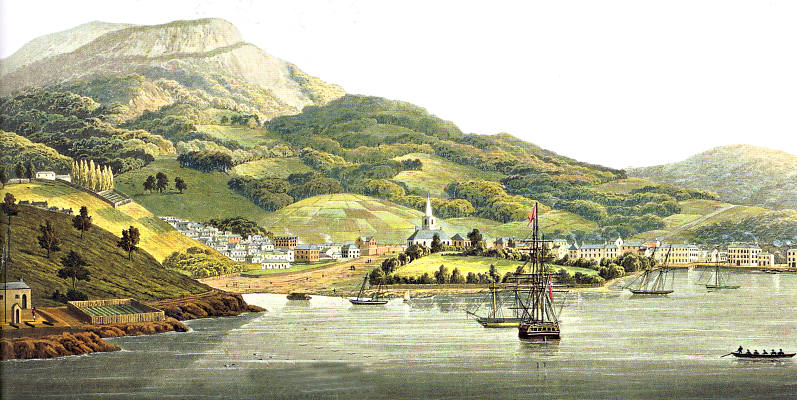 Bennett's description on his convict records was given as follows: Trade: Bookbinder, Height 5'5", Aged 18, from Whitechapel, Brown hair dark and gray eyes, Marks: A.S. Heart right arm, Mermaid left arm. His future trade from almost the day he reached Van Dieman’s’ land is documented as a Gardener (which in those days would have meant Market Gardener).

James’ convict record is far from perfect. His conduct does not come to the attention of the authorities until 22nd April 1827 when he absconded from his assigned master Charles Reed service from 11th to 12th then again from the 14th to 20th instant also with maliciously stabbing his masters bullock with a pitch fork - 50 lashes and sent to Maria Island 4 years.

Oct 1828 - Absconding from chain gang Hobart Town on the 4th and remaining
illegally at large in the woods until he surrendered himself at this office on
the 9th instant - 50 lashes and labour in irons - until he can be sent again
to Maria Island.

March 1829 - Chain gang - disobedience of orders- reprimand. Chain gang - gambling in prisoners barracks to work one month in irons in addition to his former sentence.

Sept 1829 - Chain gang - gambling in the Prisoner's barracks - to work one month in irons in addition to former sentence.

Nov 1834 - Thomas/ Insolence to his mistress - 14 days solitary confinement on bread and water.

March 1835 - Thomas/Threatening to poison his master and mistress -Insolence and suspicion of poisoning his masters poultry - returned to the government and worked in a Road Party on the other side of the island during pleasure of the Lieut.Governor -Grass Tree Hill Road party for 12 months on probation.

James Bennett appears to have been fortunate in serving part of his sentence between 1828-1829 on Maria Island. This was a beautiful island, which lies off the east coast of Tasmania. Many people called it the perfect Eden with its spectacular cliffs, mountains, wilderness areas and a beauty that is unsurpassed. The convicts were soon set to work in learning many useful trades, which also proved profitable to the colony. The convicts also worked in the tan yards, lumberyard, brickfield and pottery farm. It was also said the convicts enjoyed privileges unknown at other settlements, such as receiving tobacco, tea and sugar from friends, and cultivated gardens if they wished. They were not restricted to the yellow or other penal dress. Although he had a tough life as a convict, the time at Maria Island seems to have equipped him well for his future life in Victoria. 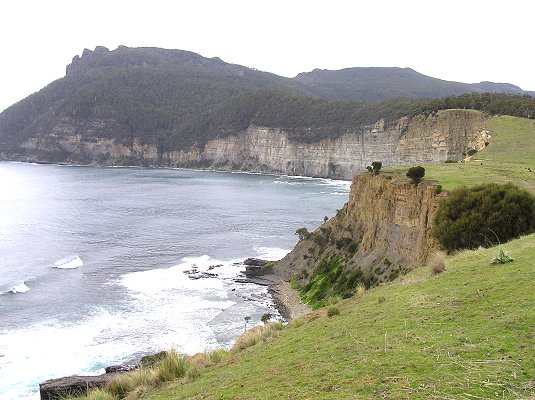 Bleak coast of Maria Island near brickworks where James may have worked Courtesy Graeme Wilson.

He married convict Mary Ann Robinson (alias Richardson) soon after her arrival in Van Dieman’s Land on 27 September 1841 in Avoca Tasmania and moved to Campbell Town where they settled down to family life. [1] By this time he had a ticket of leave and a trade, Gardener. His first daughter Sarah was born 1843 and Maria was born 1844. James received a Conditional Pardon on 22 August 1843 and had it extended on 1 December 1846. 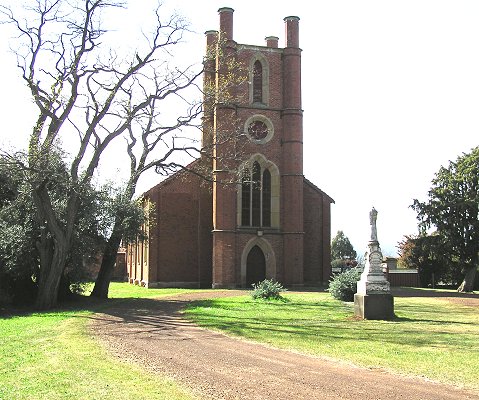 James Bennett left Launceston on board the Raven in October 1847 for Melbourne Victoria. In May 1848 Mary Bennett and her currency lassies Sarah Anne and Maria left on the Swan. It is approximately this time James owned property in Jasper and Chapel Roads, South Brighton (now Moorabbin). There was a timber dwelling built first then a substantial brick house a little later from hand made bricks from clay excavated on the property (a trade he had previously learnt at Maria Island).

In 1852 the Victorian Government passed Legislation "The Convict Prevention Act" declaring that no convicts with Certificate of Freedom or Condition Pardons were allowed into Victoria from Van Dieman’s Land. Bennett was a lucky man to have left Tasmania and settled in Victoria before that act was passed.

James lived to see both his daughters married at his property in Chapel Road, South Brighton. Sarah married James Flack in 1860 and Maria married James Rooke in 1862. James Bennett’s two daughters gave him 15 grandchildren. Most of his descendants still live in Victoria but a few families have moved across the border to New South Wales and Southern Queensland. It is thought that some of his grandchildren may have returned to England to live, their descendants have not been located.

James Bennett's conviction and subsequent transportation on the Sir Godfrey Webster took him half way round the world but 24 years of tough convict life did not deter him from building a family, a new life and eventually living to the ripe old age of 82. He died at his Chapel Street home on 1 March 1886 and is buried in the Old Cheltenham Cemetery. When he died, he was a well-respected, wealthy citizen of South Brighton Victoria, owning a market gardening property valued at 300 pounds. His life parallels the development of Australia itself in this period from Penal Settlement to the “Lucky Country”.

The grave of James Bennett in the Cheltenham Pioneers’ Cemetery 2005.