In 1917, the Mechanics Institute Hall was acquired by the Borough of Sandringham Councillors to be used as the Sandringham Town Hall.

The Brighton Southern Cross newspapers on micro-film were accessed, and references extracted to reconstruct the sequence of events that occurred in the early history of the Sandringham Bowling Club and the Croquet Club.

In March, 1905, a number of well-to-do resident gentlemen promoted a movement to form a bowling club in the district. They met in “Sandringham House”, (formerly on the site of the Sandringham Hotel), on the corner of Beach Road and Bay Road, Sandringham. There was a good representative gathering and considerable interest in the movement. The convenor of the meeting, (Cr. Ferdinando), was in the chair, and a resolution, proposed by Mr. Willey, seconded by Mr. Horsfall, “that a bowling club be formed at Sandringham,” was unanimously carried.

After the initial proposal to secure a site for the bowling green behind “Coggeshall,” (corner of Bamfield Street and Beach Road), it was agreed that the club should apply for permissive occupancy of an area 200 feet x 200 feet in the Beach Reserve.

By August, 1905, the club was informed, by the Lands Department, that their application for land in the Beach Reserve was refused.

In January, 1908, the Trustees of the Sandringham Mechanics’ Institute accepted a tender for the erection of a brick hall in Abbott Street, on the site referred to above. At the Annual Meeting of the Sandringham Institute in June, 1909 it was reported that a contract for the erection of the hall was entered into with a Mr. Cuthbert for the sum of £687, and by the terms of the contract the building was to be completed by 1st. June, 1909. The walls had been erected and the rafters of the roof put on, but the committee was sorry to say that “Mr. Cuthbert, apparently through financial difficulties, was unable to finish the contract.” 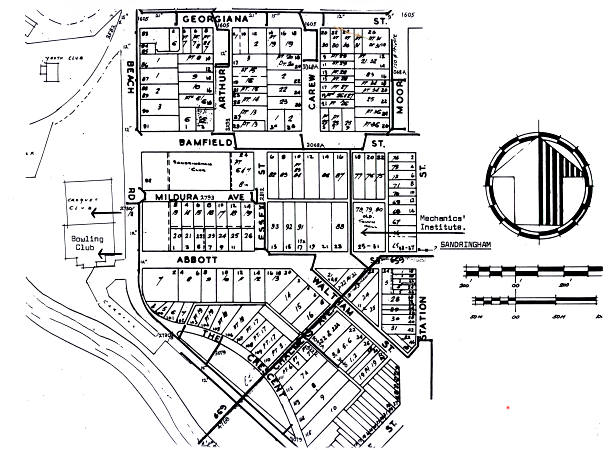 It was agreed by the members that Mr. E. C. De Garis would act as the club’s President, until the bowling green was ready to play upon, at which time another election of members would be held. At this election Cr. A. E. Small was unanimously elected President of the Sandringham Bowling Club.

The Brighton Southern Cross newspaper of 24th. July, 1909, reported that the opening of the Mechanics’ Institute Hall would be celebrated on the 18th. August, “when a fancy dress ball will be held.”

By December of that year the grass had been planted on the bowling green, and at the completion of the work the rain started, and kept on all night, which ensured that the bowling green would be ready for use in January.

In March, 1910, the Sandringham Bowling Club green was formally opened by Mr. O. R. Snowball M.L.A. The club had over forty members, and was in the proud position of being practically free of debt. The men of the Bowling Club were able to enjoy the fruits of their many years of planning and work. They played friendly games with members from Moorabbin and Cheltenham Clubs, and participated in Handicap Tournaments.

Some of the ladies of Sandringham played another form of sport – croquet, often on privately owned lawns, and they called their club the “Warrawee Club”. At the end of October, 1910, the members of the “Warrawee Club” entered into negotiations with the Sandringham Bowling Club for the lease of a site adjoining the bowling green for their croquet lawns.

In November, the Sandringham Ladies Croquet Club, (“Warrawee”), completed arrangements with the Sandringham Bowling Club for the lease of the block of land at the rear of the bowling green.

The official opening of the Sandringham Croquet Club, (“Warrawee”), was held in March 1911, when their President, Mrs. Harse, thanked the bowling club for the assistance their members had extended to the ladies in preparing the croquet lawns. The Bowling and Croquet Club members continued to enjoy their respective sports in Abbott Street, next to the Mechanics’ Institute Hall, and worked together on fund-raising events and social occasions.

All was well until a proposal was put forward to erect an extension to the Mechanics’ Institute Hall to provide a library for the good citizens of Sandringham. Through the diligent efforts of Mr. Snowball, M.L.A., Government Grants were made available.

A “prize drama” was reported in the Press in June, 1912. Owing to the encroachment of the extended hall onto the bowling green, and the desire of the members of the Bowling Club to increase the number of rinks, it was put to the Croquet Club members that they should vacate the land they occupied.

The “Warrawee Club” was disbanded and a meeting called to consider their future. A new club, named the “Sandringham Croquet Club” was formally constituted.

Disquiet continued between the two clubs into July, 1912. On the 20th. July the Brighton Southern Cross reported –

“The bowling gentlemen have not been a happy family since they departed
from the croquet ladies. It was proposed when the parties were divorced
that the ladies would receive a solatium to the extent of £25. The bowlers
offered £10, which was scornfully declined. Then the bowlers suddenly
found that if they paid all their debts, they would be £22 short for the season
and they informed the ladies that they had no money.”

In spite of the differences of opinion with members of the Croquet Club, the members of the Bowling Club had a most successful year both competitively and financially. They played 16 games, won 15, losing 1, that being the final for the pennant, making them runners up. After playing late afternoon games by lamp light, they had electric lights installed over the greens in November, 1912.

With support from many concerned citizens and community leaders, the Sandringham Croquet Club, (membership open to men and women), was able to secure a delightful site for their lawns in the Beach Reserve amongst beautiful surroundings, at the foot of Abbott Street. 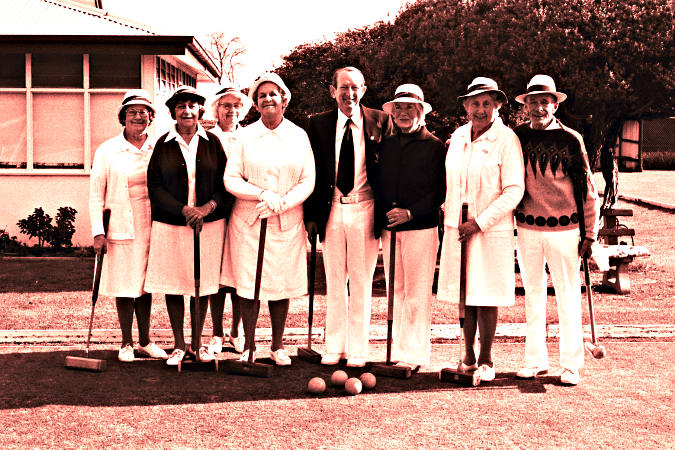 The Brighton Southern Cross of 29th. March, 1913, carried a glowing account of the opening of the Sandringham Croquet Club in the Beach Reserve. Due to the energy of the members, ideal croquet recreation lawns, in picturesque surroundings, were officially opened by Mr. Hayden. The President of the Croquet Club, Mr. Tadgell, in declaring the lawns open, voiced the gratitude of the members of the club to Mr. and Mrs. Hayden, as well as Dr. and Mrs. Harse, for generously placing their lawns at the disposal of the club while the preparation of their own ground was in progress.

Being hampered in their activities once more, due to lack of space, the question of moving the bowling green into the Beach Reserve was brought into prominence. In May, 1915, the Sandringham Bowling Club decided to offer the members of the Sandringham Croquet Club £50 for the improvements on the green next to the croquet lawns in the Beach Reserve, with a view to playing bowls there. By September, 1915, an agreement was reached with the members of the Croquet Club to use the vacant portion of the land granted to the Croquet Club by the Lands Department. The bowlers proposed to construct eight rinks instead of the four which they currently had. After further delay, the Lands Department also gave their consent.

By this time the impact of World War I, which broke out on August 4, 1914, began to change the social and economic fibre of the community. The social and sporting life in the Shire of Moorabbin changed dramatically when many hundreds of men, and women, enlisted in the armed services and proceeded overseas on active duty.

The Defence Department accepted the offer of Mr. Schmidt of the Hampton Hotel to allow his property to be used as a hospital for returned wounded soldiers. Mr. and Mrs. J. C. Warrington Rogers of the Sandringham House (Hotel), moved to “Dil Kusha” in Beach Road, when the hotel came under the control of the military to be used as a convalescent home for soldiers.

On 6th. October, 1917, the Press announced the news that the Sandringham Mechanics’ Institute Hall in Abbott Street, was to be acquired for use as a Town Hall for the newly formed Borough of Sandringham. (The Sandringham Town Hall was demolished in February, 1994.)

The Bowling Club activities continued on the greens next to the Town Hall in Abbott Street, until community life returned to a more tranquil pace after the end of hostilities in World War I. The armistice was signed between Germany and the Allies on 11th. November, 1918.

An appeal for funds was launched by the Sandringham Bowling Club in May, 1919, towards the cost of establishing a club green in the foreshore reserve, adjoining the croquet lawns. It was estimated that the cost of providing eight rinks and erecting a pavilion would be £300. The first £100 in donations and promises was readily donated at the meeting, at which time it was resolved that as soon as £200 was in sight the work would be commenced. However, it was not until the August 1921 Annual Meeting of the club that it was reported the new 8 rink green had been laid down, next to the Croquet Club’s lawn, in the Beach Reserve, one of the most picturesque areas in the State. 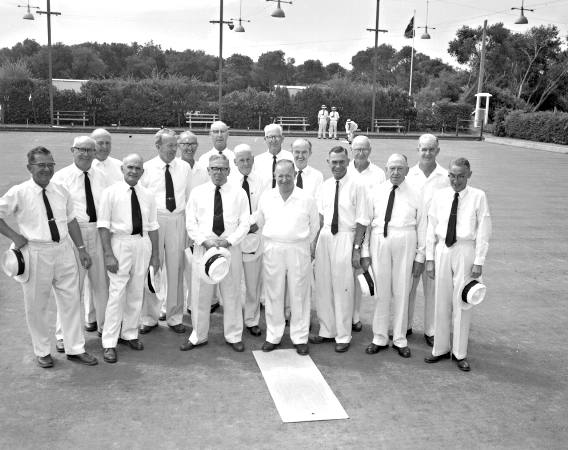 During the official opening ceremony on Monday 2nd. January, 1922, the President of the Bowling Club, Cr. H. B. Grace, became poetic during his opening speech and waxed lyrical about the “tiny blue sea ripples softly caressing the smooth, creamy shore sand” on the nearby beach. The day was delightfully sunny, yet cool and the large number of guests were entertained at afternoon tea by the Mayoress, and members of the Bowling and Croquet Clubs in the Croquet Club Pavilion, next to the bowling green.

The members of the Sandringham Bowling Club continued to play bowls at this location in the Beach Reserve, until 1975, when they made plans to move the club to a more spacious site in Tulip Street, Sandringham. In May, 1975, the Bowling Club offered their property in the Beach Reserve to the members of the Croquet Club, for $25,000, which was declined. (Sandringham News-Advertiser, May 14, 1975.)

On January 28, 1976 the Sandringham News-Advertiser, reported on the “Gala Day” opening of the new greens in Tulip Street, under ideal weather conditions. Sixteen rinks competed for the trophies and the winners were from Elsternwick district, with skipper Ivy Main. The day was a success financially with a total exceeding $625.

In September, 1977, the new Tulip Street Club House was declared open at a ceremony attended by the Mayor of Sandringham, Cr. Laurence Bottomley and the President of the Royal Victorian Bowls Association, Mr. W. Thomson. In the year 2005, the club is still located at 25 Tulip Street, Sandringham and is known as the Sandringham Bowls Club Inc. 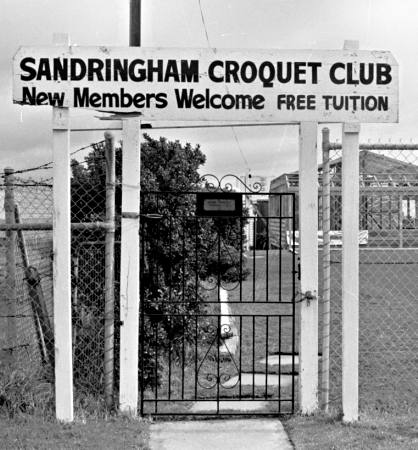