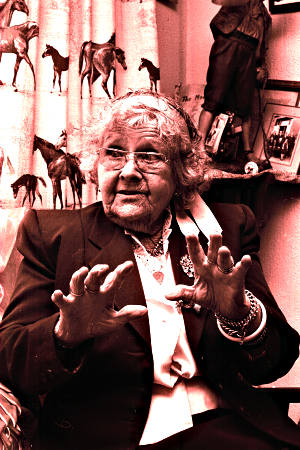 Walking into her lounge room is like walking into a crowded party full of strange guests and you must greet and be introduced to everyone by your hostess before settling.

Framed and caught in childhood, her son looks down seriously at you as he poses in kilt and cap.

A boxer in silk shorts and with gloved fists, smiles in sepia.

A costumed child with pointed shoes and piquant face, stares.

Knick-knacks and trinkets crowd the room. A ribbon from a box of chocolates. Some tinsel from some past Christmas. A whip with a wrought silver handle that had survived the Boer and Crimean Wars.

Ropes and harnesses that once aided world famous performers.

Dolls with waxed and pouting faces or lolling rag heads and glazed eyes.

And boxers and boxes of photographs of people who, like the dolls are smiling or staring from one world into a world they never knew or perhaps would want to know.

Mrs Greenwood’s prize pupil, “La Frankie” – unaware of her impending death – smiles triumphantly as she leans on the trapeze – as if defying fate by refusing to step out of the frame.

“La Frankie:” fell to her death during a rope act six or seven years ago. And time for Mrs Greenwood also teetered and fell back into the past.

Mrs Greenwood was born and bred in the circus. She spent her youth travelling around Australia with the circus and her middle age devoted to the training of young circus performers.

Now at 92 Mrs Greenwood is a relic of a way of life that has past and her home is a museum devoted to its memory.

She is small and almost round, dressed in a dark blue suit and cream silk blouse and like the room, her body is crowded with trinkets of jewellery and knick-knacks.

Her eyes are bright blue and alert; her feet are tiny and neat and totally free of the crippling corns, calluses and bunions that plague so many elderly people.

She takes off her tiny shoes to demonstrate how supple her feet are.

Mrs Greenwood was born “on the road” at Braidwood, New South Wales in the middle of winter, 1885.

Her mother and father were running Mackie’s Lilliputian Circus and by the age of three, “Aggie” Mackie was performing as a contortionist.

There were no male performers in the circus and besides performing, Mrs Greenwood and her four sisters had to wash, cook clean and sew.

When she was eleven her mother died.

Meanwhile her father had given up the circus and he died a few months later.

Mrs Greenwood and her four sisters were apprentices to the Eroni Brothers Circus which toured Australia.

The sisters were billed as the “Famous Mackie Sisters” but star billing did not mean star treatment and they had to pull their weight in the running of the circus as well as performing.

Mrs Greenwood cooked for 56 people. She made all her own circus clothes and often helped with others – and looked after the animals.

Touring Australia with Eroni’s Circus was just the first of many tours with other circuses such as Sole’s, Perry’s and Fitzgeralds’ and at one stage of her life she toured under the Tivoli management.

When she married Arthur William Greenwood, Mrs Greenwood had planned on being the contented wife of a foreman in industry but after six months of domesticity she became restless.

She took up teaching and for more than 40 years ran a school in Melbourne called A C Greenwood’s Acrobatic, tumbling and limbering school.

Mrs Greenwood has been around Australia “Half a dozen times at least” but under very different conditions known by the jet setting state-hopping public of today.

Driving horse wagons that became bogged in mud in the black soil areas of Queensland, swimming animals across rivers, bush fires and floods and unmade roods made it a pioneering adventure and there the nearest thing to jet lag was exhaustion.

The touring circus had been phased out with the introduction of television and cinema and according to Mrs Greenwood a “lack of good teachers” in acrobatic and trapeze work.

The Great Moscow Circus – one of the few remaining touring circuses – is more sophisticated and more sensational and performers face different pressures to those dealt with in Mrs Greenwood’s day.

Her lively conversation and house full of treasures from the past are our only insight and she is quite correct in saying “You’ve go no idea, darling.”

Mrs Greenwood’s treasures have not had time to gather dust as they are handled too fondly and too frequently for that.

Mrs Greenwood died in her home from pneumonia seven days after this article was published in the Moorabbin News February 2, 1977. 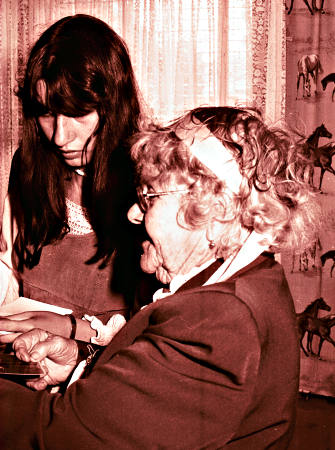