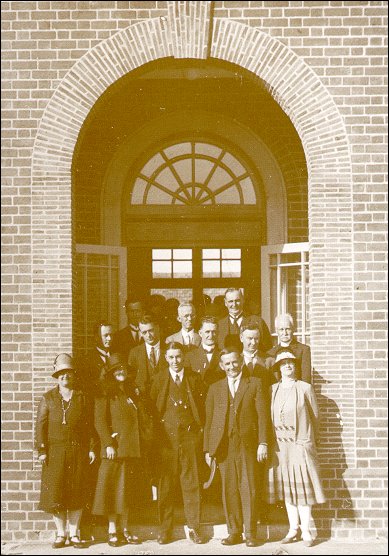 Cr Roy Beardsworth ,a councillor in the Borough of Carrum, was invited to perform the opening ceremony of the new high school, Mordialloc-Carrum, September 1924. Beardsworth was elected to the Chelsea Council in 1922. “One of his greatest achievements was the creation of Mordialloc Chelsea High School. He was the first to agitate for such an institution. He led the deputation to the Minister of Education on behalf of the Chelsea Council. He offered to donate the land for the high school thus ensuring its establishment.” (Notes from Chelsea Historical Society)

In his address at the opening he was reported as saying:

It gave him untold pleasure to see this wonderful boon obtained for the children of this district. He hoped the motto of the new school would be “Nil Desperandum.” Never despair was the motto of those who had sought this school. In spite of carping critics they went right on to success. He urged the children to adopt his motto through life. All ideals were ultimately achieved. Looking in the future he could see many of the scholars of this school becoming the leaders of the nation. As such (and at all times) let them never forget to seek the Peace of All Nations., and the Brotherhood of Man.

“At the opening of the Carrum Mordialloc District High School, Cr Beadsworth congratulated the children present upon being the foundation scholars of the school.

We publish the full herewith the full list of scholars - put this away - in time to come it will be a treasured document. You will be able to point to your name in print as one of the Foundation Scholars - perhaps to your children’s children.

As Chelsea had the largest number of children, we place them first on the list: