The Ghost of Mordialloc 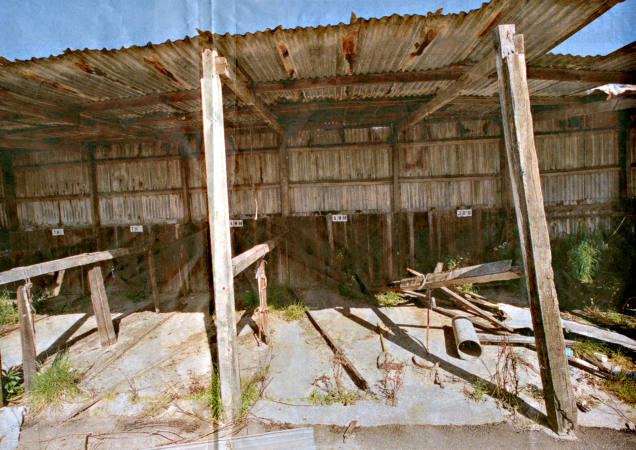 Where once Epsom echoed to the sounds of galloping horses and the chatter of trainers and jockeys, the only sound now is the mournful flapping of corrugated iron in the wind. 1999. Photographer Vince Caligiuri.

It is a sight sad enough to make you want to put it – and, therefore, your feelings for the place – properly to rest. Now. We need closure, as the relationship psychologists call it, and we need it to put what once was a race and training track rich in history out of its misery, and to put that chapter in our racing life behind us.

A closure of sorts had already taken place at Epsom, a place that will long be affectionately remembered, particularly in Mordialloc. A high, wire fence has been erected around its perimeter but, 18 months after it last heard the thumping of hooves and the banter of its horsemen and was consigned to “re-development”, it lingers on.

It is a pathetic sight these days, and the sooner it is completely razed, the better it will be to help us move one. Hopefully, when the end comes for Waverley Park, which endeared itself to many football fans as Epsom had done to racing people, it will be a swifter, cleaner death.

There is nothing clean about Epsom now. It is a ghost track, skeletal, barren, in its death throes, but with enough still intact to give it a sense of the living. Some stalls have been dismantled, but others are almost as they were. The chewed wooden rails, the twine used to tether the horses, the U-shaped scrapers used to removed water from the … you’ll still find them there.

Many of the stalls, those intact as well as dismantled, or somewhere in between, have the initials of the trainers – TH, JRB, CIB, MGP, EWL. Stall 204, at the end of the wooden stalls, has the initials WBS – Bill Seymour. On the ground is a torn white bag full of straw. And an empty bottle of Mt Rufus Port.

The timber and metal from the dismembered stalls lies untidily on the ground. But one of the sand rolls is much as it was in Epsom’s good times, and the hosing stalls evoke memories of interviews conducted as water sprayed about and the trainer kept going about his or her business.

The metal roof on one section of horse stalls flaps and creaks in the wind, and with not another soul about, it’s a bit spooky – like waling into an area that has been evacuated because of some terrible accident, like radiation.

There are bits of lead rope everywhere, and even a pair of rotting boots lies among the junk. There are chairs and stools in all sorts of condition, and worn, weather-beaten brooms, although the viewing box at the end of the straight stands defiantly, in good shape. Alas, the tracts themselves have succumbed, the grass having become wild and long, and the artificial surfaces removed.

If I am succumbing myself, to about of acute nostalgia about this place, it is because it holds such fond memories. Some involve a personal connection with Epsom; others involve being an observer at a training ground that hosted a long line of wonderful gallopers and characters, and that was, with its compact design, a racing writer’s dream.

You would drive into the car park, walk a few metres to the administration building and, from the slight rise in front of it, watch the gallops just a short distance away as trainers came and went. There you would wander down to the stalls to chase up a story, or simply to be part of the camaraderie. 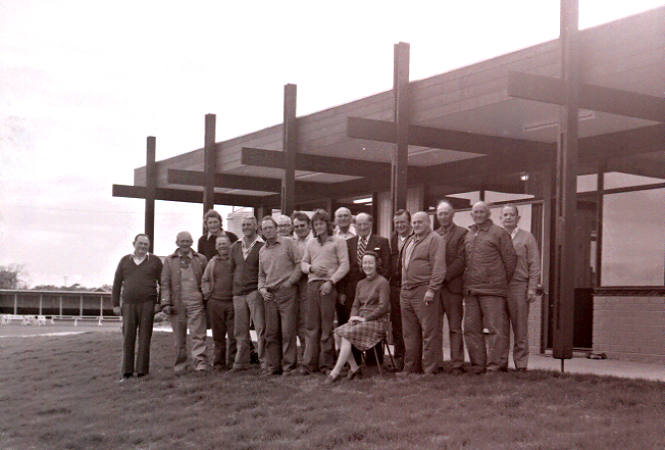 I must declare my personal interest, having had two horses trained at Epsom, under Jack Pengilly’s astute care. So, in a small way, I was a participant, a part of the action with a true sense of belonging there, rather than being an on-looker. Big Palooka and Captain Palice were reason enough to set the alarm and head for the track, just three or four minutes’ drive away, at any time of the year. There were remarkably few tantrums at such unearthly times of the morning; the spirit was usually uplifting, with humor and optimism aplenty.

There was plenty of hype about Epsom. New training surfaces, a new horse pool (“bathing strictly forbidden”, as if anyone would), or the building of a super-stable complex promoted a rush of publicity. And when the elite-race winners, among them interstate and Kiwi raiders, kept rolling in, it was, as they say, the best of times. The journalists, photographers, camera crews rolled in, too, and the tea and coffee flowed freely in the track manager’s office. 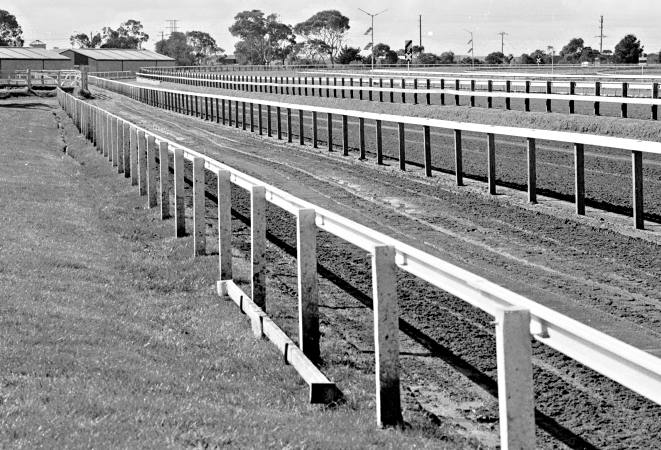 And everyone seemed happy when they changed the name of a street opposite Epsom to Manikato Avenue, after one of the finest horses to race in Australia.

On the corner of Manikato Avenue and McDonald Street stood Rick Hore-Lacy’s imposing stables. They have been razed, and nothing is there now. Next door, very much intact, is what used to be known as Symbol Lodge, which once was dubbed “a Hilton for horses” when set up by the late Floyd Podgornik.

In McDonald Street, off which is/was the entrance to Epsom training track, were other impressive stables. The sign “Vain Lodge” still hangs on a green fence outside one establishment, but the M9oloneys have transplanted themselves to Caulfield. Further up, a storage business has taken the place of what used to be John Hawkes’ plush stables.

And further up still, the one-course stables, much plainer buildings than these others, stand derelict, their gutters full of weeks, their roofs broken, but with the framework still intact. While much of Epsom is still alive, although condemned, much of it is dead or dying. It is not pretty.

The industry’s decision in the mid-1990s to close Epsom, and spend more on developing other centres, was resisted tenaciously. As with Waverley, it seemed inevitable that the fight to keep Epsom would be lost. But as with Waverley, the opponents of closure did not give up easily. Then, in April 1998, the patient was taken off life support as the last trainers left. 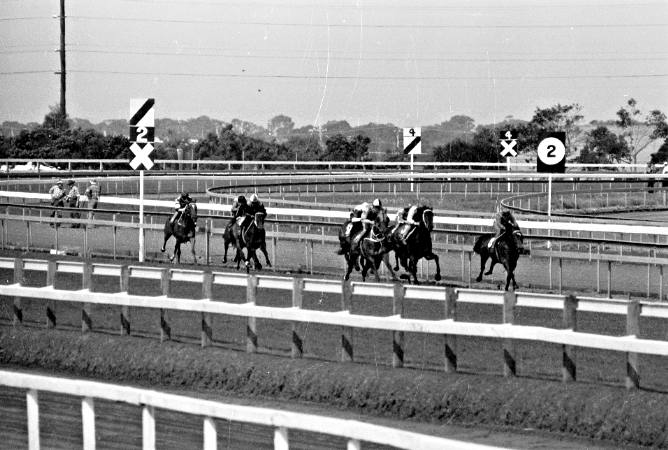 It was a huge loss in many ways, not least for Mordialloc and neighbouring communities. Where once there were racetracks at Epsom, Mentone and Aspendale (Aspen won the Newmarket Handicap in 1880 and 1881, so that suburb has also kept a racing link), there were none now. Epsom, which was built in 1886 and was last used for racing in 1938, was the last to go after almost making it into a third century (it might still make it, albeit in a decrepit state), and another connection to the district’s racing past was broken.

If Mordialloc was once considered to be a holiday resort for Melbournians, it was also famous for its horsey connection, producing a marvellous array of champion horses, trainers and jockeys. Phar Lap once resided at nearby Braeside, and the place once had a wizard – trainer Jack Hold, who became known as “The Wizard of Mordialloc”.

But for now, Epsom lies eerily in limbo, waiting to be wiped off the landscape forever. The Urban Land Corporation has applied for the site, which covers about 45 hectares, to be rezoned for residential development. The local press reported recently that it was zoned Special Use 2, and that an independent panel was to assess the course’s future after considering environmental and historical concerns. There is, it seems, an issue about vegetation – and there is plenty of that ate present.

At least we still have the beach at Mordialloc. The stretch of sand and water that is still used by trainers today to walk and swim their horses once was known as “The Horse Paddock”. Rivette, who won the cups double in 1939, severely cut her leg there when she was being prepared for the 1938 Caulfield Cup, but it is better known for its therapeutic qualities, and as a training aid.

And right now, it is a living link to the horseracing past for the local community. The “paddock” may be said, but we’ll take it. 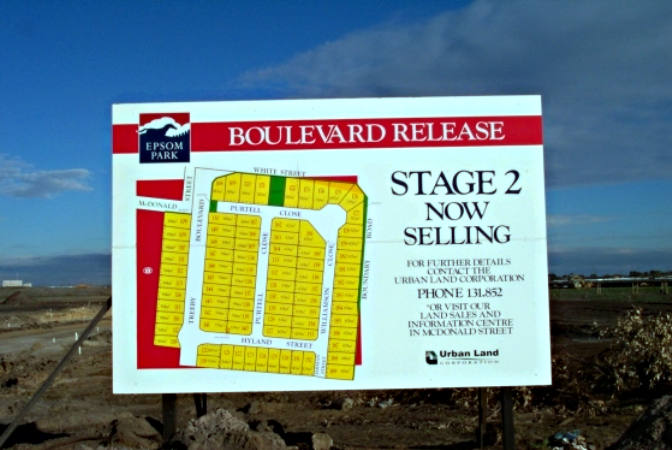