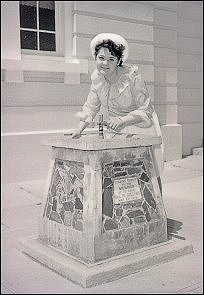 A drinking fountain was erected by citizens of Chelsea as a tribute to Constable George Gilding. He was described by Margaret Diggerson, Historian of the Chelsea Historical Society, as "an old fashioned country cop. If he caught you riding your bike on the footpath or riding without a light at night he would kick you up the backside or give you a clip behind the ear. No one ever went to court. The real threat was ‘I’ll tell your father". "He was remembered with affection," said Margaret. "He was strict but fair."

Inscribed on the white marble are the words, "Citizens’ Tribute to the Memory of 1st Const Geo. R. Gilding May 5th 1945.