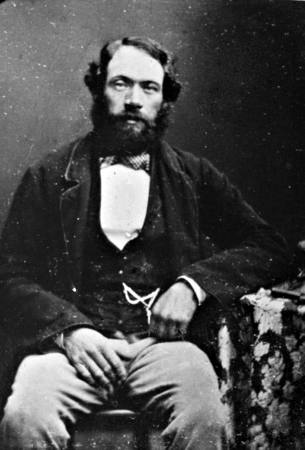 When Joseph Orr died at his Cheltenham home in December 1899, he was described by his son-in-law, John Chapman, the informant on his death certificate, as an Imperial Pensioner.
As far as anyone living knew, he was a market gardener and had been for many years. Some minor detective work revealed a velum discharge certificate from the British Army in the name of James Flack of Tanderagee, County Armagh, and a pay book belonging to Joseph Orr which placed him in India in the mid 1850s. 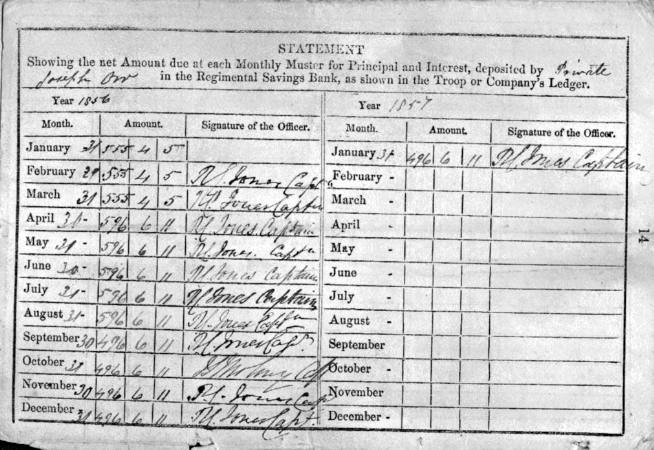 Further investigation revealed a reference from Captain Baumgartner of the 83rd Regiment of Infantry, known as the Royal Irish Fusiliers, written at the headquarters in Deesa. Orr had acted for many years as personal valet to Captain Baumgartner and had acquired many useful skills which were to serve him well over the years.

A trip to the Public Record Office in Kew, Surrey opened up a treasure trove of detail on my great-great grandfather’s life in the British Army. He had enlisted in March 1842 at the age of 19, at Armagh Town, not far from his native place, Keady, Armagh. Among others who enlisted in the 83rd was one James Flack. Together the two travelled the world, after initially being stationed across Ireland in Athlone, Armagh, Kilkenny and Dublin. The regiment went on to Manchester and Leeds in England and at one point crossed the Atlantic to Toronto, Canada and then finally to British India.

In India, the regiment served at Camp Deesa, Kurracher, for most of the 1850s with a period of about eight months in Bombay in the latter part of 1855.

While the quarterly musters reveal Joe Orr’s consistently good conduct, they tell a different story of good friend James, who found himself in regimental confinement at Hydrabad for most of July 1853, which led to him being stripped of the promotion to Sergeant he had received a short time earlier. Flack was court martialled ‘for conduct unbecoming the character of a non-commissioned officer in having been drunk when caterer’. Some years earlier he had been charged for neglect of duty in Dublin ‘in allowing Corporal McKechnie, who was drunk at the time, to have an improper woman in the Barrack room after hours.’

Flack and Orr were discharged ‘at Bombay on the 31 March 1857 with free passage to Australia’. Joseph Orr’s discharge was ‘at his own request ... with right of Registry for deferred pension of 4d a day”’. He was described as 5 ft 7 inches tall with light brown hair, grey eyes and a sallow complexion. His conduct was ‘very good, he is in possession of two good conduct badges with pay’.

Captain Baumgartner’s reference written on July 12 1857, around the time of the Indian Mutiny and Black Hole of Calcutta incident, spoke glowingly of Joe Orr. He wrote:

Private Joseph Orr 83rd Regiment being about to leave his corps, having taken his discharge with a view to proceed to Australia, I have very great pleasure in giving his this certificate, as a token of the very high opinion I have of his worth.

I have known him since January 1849. He has been my servant for nearly the whole of the time that I have passed in the 83rd Regiment, and I was in his company for nearly five years. I know that during that period he was never brought before an officer for any fault, and that during the whole of his service of fifteen years, he has never been guilty of any offence – military or otherwise. His clean defaulter’s sheet attests this most honourable fact, and is in itself the strongest testimony as to the high character which he so deservedly bears.

As a servant I have ever found Joseph Orr intelligent, strictly honest and attentive to his duties. He thoroughly understands the work of a gentleman’s servant.
It is with regret I see him leaving the 83rd Regiment, but I trust that it may be the means of his improving his condition in life, and I heartily wish him the good fortune which by his uniformly excellent conduct, he has richly deserved.

On his arrival in Melbourne, Joe Orr proceeded to the town of Cheltenham, and took up a plot of land which was part of the two Acre Village in Argus Street. He married an Irish orphan girl Julia Ann O’Brien from Kildysart, County Clare, at the Congregational Church in Lonsdale Street Melbourne, on 2 May 1860. Over the next decade, five children were born to the couple, Joseph William, Archibald, Julia Ann, Louisa Jane and Alfred John. Louisa died in infancy and was buried in December 1871 at the Old Cheltenham Cemetery. Julia died in February 1874 at the tender age of 33 years and was buried with her daughter in the Presbyterian portion of the Pioneer Cemetery. Moorabbin Rate books of this period show Joseph as a gardener, the owner of a two roomed house on six acres in Argus Road Cheltenham (near the corner of Wilson Street).

In 1874, Joe increased his holdings, purchasing a further four acres on Cavanagh Street from Thomas Tilley through William Gledhill King. On Joseph’s death in 1899, he was the owner of lots 239, 240, 338-341, a total of 12 acres and weatherboard house in Argus Street. 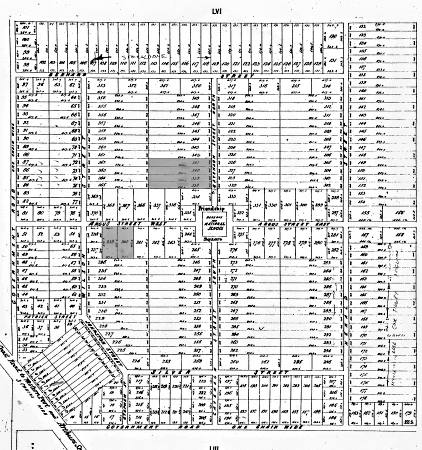 Following a valuation by Mr Fairlam, Joseph’s estate was divided among his three remaining children, Archibald having died aged 15 in 1885. Joseph Orr junior continued to work the market garden on the corner of Wilson and Argus Streets until his death in 1948. Julia married John Chapman, a carpenter from Cambridge in England and they lived on Wilson Street until their deaths in 1940 and 1953 respectively. Alfred John Orr 1872-1946 was known to many as ‘Ringy’ Orr. He continued to work the Cavanagh Street property until his death. He had two sons Alf junior and Bill Orr and daughters Julia (Mrs Leo Goodison), Stella (Mrs Lomax), Gladys (Mrs Middleton), Lily (Mrs Bill Arnold), Amy (Mrs Reg Schubach) and Joan (Mrs W A Foster).