A Cheltenham Family and the Great War

In the year 1914, the Scantleburys of Coape Street Cheltenham were a busy family involved in a rapidly growing community. Dr George Scantlebury ran his medical practice from home at Marathon on the corner of Coape Street and Charman Road and his wife Catherine managed a small private hospital also on the property.[1] Their eldest child Vera was in her first year as a Resident Medical Officer at the Melbourne Hospital, Cliff was in his final year of Medicine at the University of Melbourne, Dorothy was finishing an Arts degree and youngest family member Eileen was at school at Toorak College. When Vera arrived back in 1919 from two years as an Assistant Surgeon, an ex-officio lieutenant, at the Endell Street Military Hospital in London, her family home was quiet and irrevocably changed. George was still working from home in Cheltenham, but Cliff was furthering his medical qualifications in Britain and would not return home until 1922.[2] Dorothy, devastated by the loss of her fiancé Robert Bage at Gallipoli in 1915 was teaching at Clyde School in Macedon with Catherine managing the school's boarding house. Eileen was living at Janet Clarke Hall, completing her Arts degree and soon to be married to Dr Charles Kellaway.[3] Both the war and the passage of time had conspired to reshape the Scantlebury household just as they reshaped homes throughout Australia. 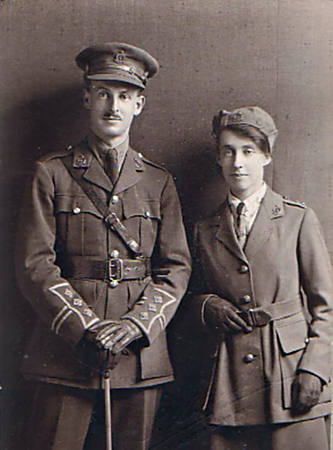 Cliff Scantlebury completed his medical degree in late 1914. He answered Lord Kitchener's urgent request in early 1915 for one hundred doctors from Australia to help meet the unparalleled demand generated by the War. At the start of the War, Kitchener headed the War Office, became Secretary of State for War, and a Cabinet Minister. He was one of the few to predict a long war and the terrible losses of the first Battle of Ypres in October and November 1914 indicated clearly that medical resources were overstretched. On February 26, 1915 the Melbourne Argus headline proclaimed DOCTORS FOR THE FRONT: 100 WANTED AT ONCE. WAR OFFICE CALL! On Thursday April 1, fifteen doctors were graduated in a special ceremony at the University of Melbourne. All fifteen had been accepted by the Royal Army Medical Corps for service with Kitchener's Hundred, including Dr Cliff Scantlebury and were at sea when the actual ceremony occurred.[4] Cliff departed on the RMS Orontes on April 14, 1915 bound for London via Colombo and Naples.[5] It is unfortunate that there are very few service records for the Australian doctors who served during the war primarily with the RAMC. Their service was regarded a 'temporary' and their records were destroyed in England at the end of the war.[6] 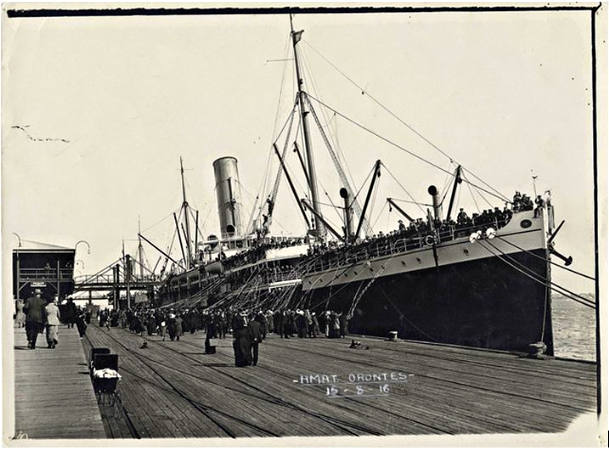 Cliff served briefly at Cape Helles during the Gallipoli campaign and was then assigned to Field Ambulances in France. His sister Vera searched for him at the No 13 Stationary Hospital in Boulogne in the bitter cold and sleet of March 1917 only to find that he had been posted to the No 49 Casualty Clearing Station and she had missed him by a week.[7] No 13 was a special surgical unit dealing particularly with facial reconstruction and was 'opened in the autumn of 1914 in some very unpromising sugar sheds on the quay'.[8] Casualty Clearing Stations were part of the casualty evacuation chain, further back from the front line than the Aid Posts and Field Ambulances. Their job was to treat soldiers sufficiently for their return to duty or, in most cases, to enable them to be evacuated to a Base or Stationary Hospital. CCS's were generally located on or near railway lines, to facilitate movement of casualties from the battlefield and on to the hospitals. They moved quite frequently according to the whereabouts of the Front Line and Vera did not meet up with her brother until the end of April 1917 when he had leave and came to London. He had been at Achiet-le-grand, 150 kilometres south-east of Boulogne and about three miles from the front.[9] By April 1918 he was with the No 3 CCS which was possibly situated at Esquelbecq about twenty kilometres from Dunkirk.[10] Cliff's service particulars are elusive and can only be partly pieced together from mentions in his sister Vera's diary.

His experiences can only have been both extraordinary and challenging. He had completed a five year medical degree, turned twenty-four in December 1914 and had no time to undertake a Resident Medical Officer's role in a hospital, as was the norm, before arriving at Cape Helles. Many of Kitchener's Hundred would have had the same lack of experience.

Cliff remained in Britain when the war ended and furthered his medical studies specialising as an ear, nose and throat surgeon, achieving his Fellowship in Edinburgh in 1921 and returning to a position at the Melbourne Hospital in 1922.[11] He married Lilian Whybrow in Hampstead England in late April 1920. Lilian had worked with Vera Deakin for the Red Cross during the war, becoming Head of the Bureau in 1919. She was later integral to the growth and development of the Australian Red Cross Society and awarded an OBE in 1959. Cliff was the founding President of the Australian Otolaryngology Society from 1950 to 1952 and died in 1976.

Encouraged and supported by her close family, Vera Scantlebury completed her medical degree in 1913. As one of the top ten students of her year, she was appointed to the Melbourne Hospital, 1914-1915 as a Resident Medical Officer and then to the Children's Hospital in 1915.[12] By October 1916, when she made her decision to accept a position in London in a military hospital, she was the Senior Registrar and working long hours in a very understaffed hospital. Due to enlistments, all of Melbourne's hospitals were struggling with staffing and for Vera, it was not easy to walk away from this responsibility. However, Vera waved goodbye to her family and friends at Port Melbourne pier from the deck of the RMS Morea on February 14, 1917, 'our day of waving goodbye and breaking ribbons'.[13] She had been offered a position as an Assistant Surgeon at the Endell Street Military Hospital in London, close to Covent Garden, at the nominal rank of Lieutenant. Her initial contract was for a period of six months at a salary of £1- per day with responsibility for 50 to 60 patients.[14] She believed it was her duty to go.

The Endell Street Military Hospital was the creation of suffragists Dr Louisa Garrett Anderson and Dr Flora Murray. As women were not permitted to enlist with the RAMC, they had voluntarily organised a military hospital in the hastily converted Claridges Hotel in Paris in September 1914 and by November, another in a chateau near Boulogne on the French coast. Five months was sufficient to demonstrate their capacity for both management and medicine. Consequently, the War Office offered the St Giles Work House in Covent Garden for the establishment of a large military hospital. The Endell Street Military Hospital was the only military hospital run by women within the British army.[15] By the time Vera arrived in April 1917, the hospital had 573 beds, with another 230 in attached auxiliary VAD hospitals and a staff of over 180, all but six or seven being female.[16] Vera wrote of her first day at Endell Street that it was ‘All such a new life.’[17] She was twenty-seven years old and along with her Melbourne University friend Dr Rachel Champion, the youngest of doctors on staff and the youngest of Australian women doctors who went to war. The surgical work was physically and emotionally tough and wounds were ‘multiple and shocking’.[18] Vera had barely three years of hospital experience and writes in an early letter ‘This work is so entirely different from anything I have ever done – I am so slow in brain and body’[19].

Both male and female doctors were relatively unprepared for the nature and intensity of war surgery. In 1914 Dr Garrett Anderson had been the only member of the hospital unit she and Dr Murray had taken to France who had held an appointment as surgeon in an adult hospital. The nature of her surgical experience provided scant training for the major trauma surgery of war wounds and infection.[20] Endell Street's historian has explained that before the war the women had little or no opportunity 'to perform rudimentary neurosurgery or amputate a limb, or to treat a compound fracture of a femur, let alone to operate on urgent cases for many hours at a stretch'.[21] Regular convoys of between thirty and fifty injured soldiers, and sometimes up to eighty, were rushed from the nearby railway station from the time the hospital opened in May 1915 and Vera writes that she had assisted with over twenty operations on her first day of work on May 1, 1917.[22]

Vera gradually became accustomed to the horrors and challenges of military surgery but never ceased to worry about her patients and the adequacy of her skills as a surgeon. She returned home leaving Liverpool on HMAT Osterley on January 11, 1919, having travelled down to the boat with Sir Douglas and Lady Paquita Mawson.

At home in Cheltenham, Catherine was the inaugural President of the local branch of the Red Cross Society which was established in Australia at the outbreak of war. The Cheltenham branch were involved in frequent fund-raising activities such as the Beaumaris Carnival which raised £1200- for wounded soldiers in October 1915 and entertainments held in the Cheltenham Hall.[23] Catherine and George both wrote dozens of letters to Vera and Cliff throughout their service overseas and always concerned for their children's health, they sent packages containing cakes and butter despite Vera's protestations that she had plenty to eat.

Having served for twenty months as a military surgeon and ex-officio member of the RAMC, Vera applied to the Australian government Department of Repatriation in April 1919 for a refund of the £129- return fare she had paid herself for her wartime travel. The Department decided that she was indeed a soldier within the meaning of the Repatriation Act but that her fare to England should have been paid by the Imperial authorities. They repaid half her fare.[24] There were very few professional benefits from Vera's war service in the immediate post-war period but there were important long-term gains. Firstly she knew that she had contributed - she had done her duty as a doctor. Secondly she had experienced the outstanding professional leadership of other women at Endell Street Military Hospital. This combination would lead her to a pioneering career in infant welfare that would benefit all Victorians. 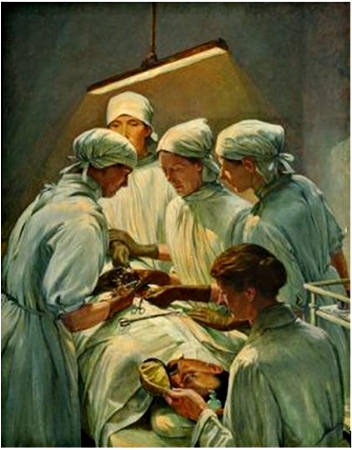