Encroachment of Land on the Chelsea Beachfront 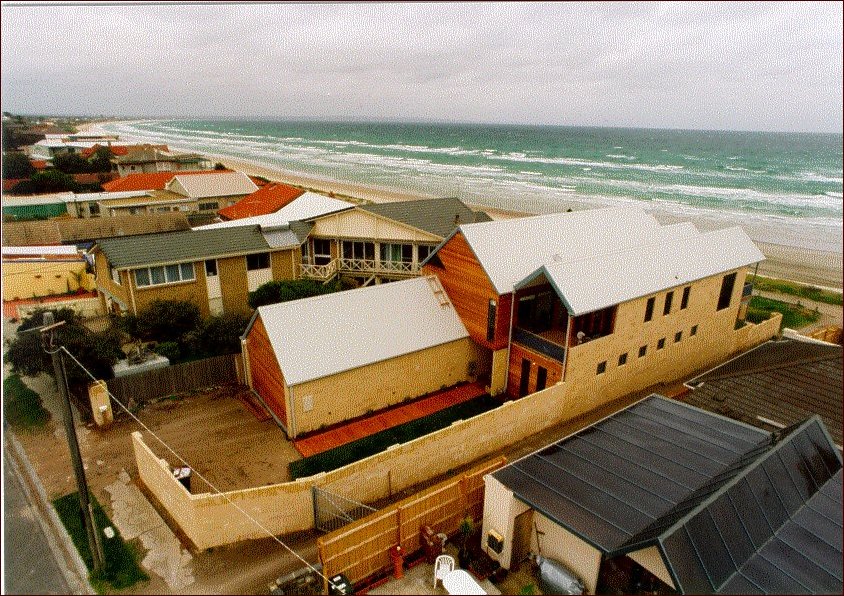 Houses overlooking the Bay at Aspendale.

A Bill to clarify and define the foreshore frontages of private land with Crown land was passed by the State Government in 1981.

The need for this special Bill came about as several owners of land abutting the foreshore were refused mortgages on their properties because the western boundary of their land was not clear on their titles.

As far back as 1865/66, when the beach side land between Mordialloc Creek and Keast Park, Carrum was sold in 18 large allotments, their western foreshore boundary was delineated as being 100 feet above the high water mark.

These large allotments, over subsequent years, were subdivided into smaller residential blocks and as buildings and fencing of these sites fronting the beached occurred. Irregularities occurred in measuring the foreshore boundary alignment, in many cases it was simply done by line of sight, from neighbouring fences.

Eventually in the 1970’s, the issues of correctness of foreshore boundaries became important to raise for resolving, as it was obvious that over a period of some 120 years, the high water mark had receded, and several subdivisions were found to have taken in land that was actually Crown Reserve.

The Bill, introduced as a non political measure, supported by both major political parties and tabled by Ian Cathie MLA (Labor) in the Assembly and by Neil Stacey MLC (Liberal) in the Council. It became law and redefined the legal boundary for the 200 or so private properties fronting the beach.

Surveyors for the Department of Lands were fortunately able to adopt a commonsense approach when fixing permanent alignments, and for many owners, they were not disadvantaged or required to relocate their foreshore boundary fencing.

From my memory while a Chelsea Councillor, it was in the mid 1980’s that there were some 20 to 30 properties where a boundary had encroached too far into the Crown Reserve and owners were required at their own expense to remove their fencing on the alignment defined by the Act.

After considerable debate and humane consideration of these owners, many of whom were elderly and alarmed at these events which h in most cases were not of their doing, the Chelsea Council adapted the policy that fences could remain where the encroachment was minimal until either the owners sold or the property was redeveloped. Ultimately the fenced boundary had to be moved to its legal alignment.

Where the encroachment was significant, Council insisted the fence be removed, and where the landowners failed to do so, the Council removed the fencing and then billed the owner. Fortunately there were only a handful of these to be dealt with.

The Act is a significant feature in Chelsea’s history, and all foreshore titles are not clear of any irregularity from earlier man-made rule of being measured 100 feet from the high water mark, and all and from the consequential difficulties it presented.