Kilbreda College has educated thousands of young people since the early 1900s. While this could be said of all the schools in Mentone, a true ‘suburb of schools’, Kilbreda’s place in Mentone’s history is unique in that its day to day activities have been played out for more than a century in a building which is a focal point of the area. The lighting of Kibreda’s tower about a decade ago has literally put the spotlight on the building’s place as the centrepiece of Matthew Davies’ vision of the 1880s. Built as the Mentone Coffee Palace in 1887, the property was purchased by the Brigidine Sisters in mid 1904, as the site for their first metropolitan school.

The Sisters of St Brigid had their origins in Tullow, County Carlow, Ireland , in 1807. Their mission in Australia began in the 1880s in rural areas of NSW and Victoria. On August 8 1904, the sisters began two schools in Mentone, comprising twenty five primary students (St Patrick’s) and three secondary students (St Brigid’s) later Kilbreda. A group of Brigidine sisters from the Brigidine Convent at Echuca were staying locally at Coronet Hill in Black Rock and attended Mass in St Patrick’s Mentone. The Parish Priest at that time, Fr McGuire asked whether it might be possible for them to send a group of sisters to Mentone to start a Catholic school there as most of the local Catholic children in Cheltenham, Mentone, Mordialloc and beyond attended State schools; the closest Catholic school being at Brighton. Arrangements were made and word was sent from Tullow that sisters would be sent, but where would they set up a school? The small weatherboard structure which was St Patrick’s Mentone in those days, was overshadowed by the abandoned Mentone Coffee Palace building next door. The owners of the building were glad to be rid of it as attempts to establish businesses there had tried and failed numerous times over the preceding decade. One of the sisters had an old school friend, who lived with her husband James McGuffie at Aspendale. The sisters enlisted his help to arrange for the purchase, which was made towards the end of July 1904. The fully furnished Coffee Palace, which had most recently operated as William Meader’s Como House hotel, and was purported to have cost £16,000 to build, was bought for considerably less, £2,050. When, in the days following the purchase, word spread that it was to be used as a Catholic school, considerable anti-Catholic sentiment became evident in the community. 1 Ten years later, when the nuns purchased the Davies’ home to use as their Noviciate House, the Melbourne Punch went further: ‘The Brigidines have done amazingly well at Mentone. First they startled the neighbourhood by capturing a large edifice built for another purpose. Now, they have captured and taken the former sumptuous residence of Sir M. H. Davies for their headquarters. One class of person builds a house, and another lives in it’. 2 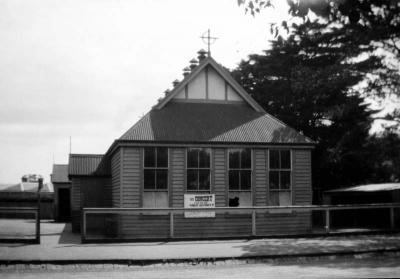 The imposing structure, thus cheaply acquired, is erected in the central position of the township, within a few minutes of the railway station and of easy access to the beach, stands on a bluestone foundation. A front entrance opens on an ornamental foyer, in the background of which is a stained glass window of elegant design. On the left, a large room, known as “Smoke-room” reserved for the leisure of gentlemen guests. Further left, was the ballroom with verandah and cloak rooms opening on to a tennis court and lawn. On the right of the entrance, was a large guest room furnished with antiques – valuable Chippendale and Sheraton chairs and tables with matching furnishings. Six steps led to the Street Level Bar, and booking offices. Left of these was the commodious dining room with French doors opening on a verandah and lawn; the latter bordered with tree ferns and selected shrubs offered relaxation in easy chairs, if desired. The pantry and store rooms leads to a well- appointed kitchen beyond which are fuel and tool sheds. 3

The sisters moved into the new Convent on July 29 1904 and set about the mammoth task of making it ready for the arrival of Archbishop Carr, who was coming to open and bless the convent the following week.

They began their task with the removal of hundreds of cockroaches from their haunts, together with the layers of dust covering everything everywhere. Dust and rubble were in quick time removed and the bird-infested tower and its approaches were cleaned of accumulated refuse. 4 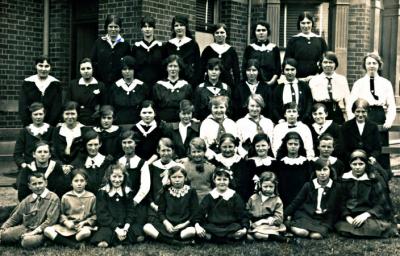 Mass was celebrated on August 7 and the following day, two schools opened their doors to pupils. St Patrick’s primary school with 25 pupils ran for a number of years in the weatherboard church building until a new brick church was built alongside it in 1906. A second school St Brigid’s High School welcomed three pupils, Eileen Dempsey, Marian Nunan and Vera Ryan. In the months following, they were joined by Juliet Hogan, Mary McGuffie, Theresa Sheedy and Annette Kellermann. Classes were conducted in the former Street Level Bar and Dining Room and the twenty six rooms on the first floor housed the nuns and from 1905 boarders. The first boarders were the Lucas sisters, daughters of a city café proprietor Antony Lucas, who was the Greek Consul to Melbourne for some years. Kilbreda also began welcoming boys from 1905, the first being Frank Dempsey, who later rose to fame as a jockey, winning the Caulfield Cup three times and many of Australia’s top races. Mother Margaret Mary Murphy was first Principal from 1904-1915. 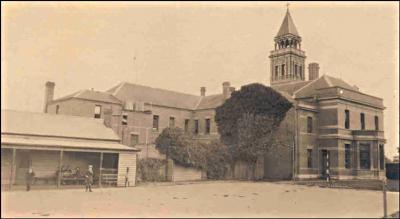 Rear view of the Brigidine Convent School before the addition of the colonnade wing.

The names and methods of subjects taught to those early students included such things as etiquette and deportment, Latin, physiology, botany, needlework and painting. In 1906, thirty-three acres were bought for a small farm, called St Benedict’s, which supplied milk, cream, vegetables and meat to the convent. Ned Naughton and Festy Coyne worked the farm and delivered the produce until they retired and the farm was sold. The two men, well-known to many locals lived on in the house until their deaths only months apart in about 1964. They were buried not far from the sisters’ grave in Cheltenham Pioneer Cemetery. The farm was situated on Nepean Highway near Oak Avenue, where Bunnings and Super Amart are now located.

In 1917, moves were made to establish a Past Pupils Association, which was formed under the patronage of Archbishop Mannix in March 1918. His cousin, Mother Berchmans Foley, was Principal at that time. The group assisted the college in fundraising activities and was responsible for producing the first college annual magazine ‘Kilbreda’ in 1932. The group gathered to celebrate the Golden Jubilee of Mother Vincent in 1931.

In the 1930s, the name Kilbreda was adopted and the uniform changed from a black or navy tunic to the more familiar green. With Mother Margaret Mary Bourke at the helm from 1927 to 1965, Kilbreda went from strength to strength, keeping abreast of current educational practices and meeting the needs of contemporary young women. Under her leadership, Kilbreda gained Class A School status, whereby it became the first Catholic College in Victoria to be authorized to set its own exams leading to the award of the Intermediate and Leaving Certificates. 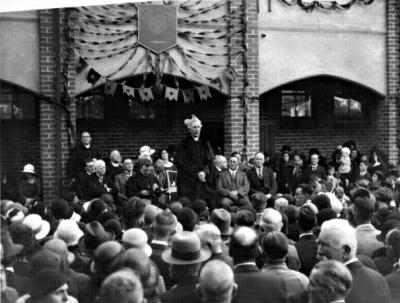 Archbishop Daniel Mannix at the officlal opening of the colonnade wing at Kilbreda College.

As student numbers increased, a letter was sent to the mother house in Tullow, to seek permission to extend the building. Mr A. A. Fritsch drew up the plans for St Benedict’s wing, known in the school as ‘the Colonnade’ in 1927. The building, comprising four classrooms on the ground floor and boarders’ dormitories above, was opened in time for the beginning of the 1928 school year. Not long after, it was decided that St Patrick’s school and church would relocate to its present site. The former church building was to be sold to Kilbreda for use as a school hall. The timing could not have been worse with the Great Depression in full swing. The convent was struggling to keep up payments until it was decided that Archbishop Mannix should come and officially open the building, five years after it had been built! A large crowd gathered as was usual when Dr Mannix was present and he led the subscriptions and thus a large portion of the debt was removed. The hall remained until 1959, when it was torn down and the St Margaret Mary Wing was built in its place. 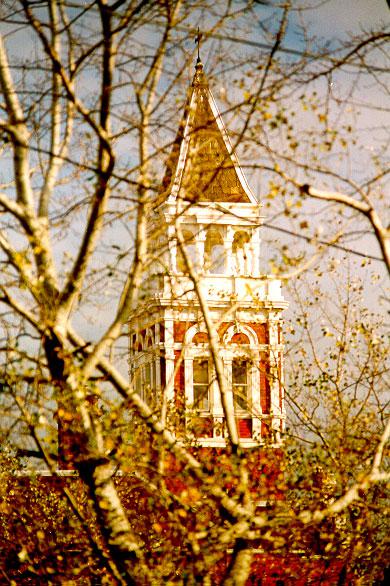 In the mid-60s, the student population hit the one thousand mark for the first time and remained so for forty years or more. During this time, two further sporting houses Alacoque and Delany were added, Lourdes having been introduced in 1945. These houses were replaced by four in the 2000s, Brigid, Tullow, Delany and Kildare. A new chapel was added to the school thanks to the work of the Convent Superior Mother Stephanie O’Neill and a Science Wing, the ‘Delany Wing’ with four state of the art science laboratories was added in 1965 with the help of a Commonwealth Government Grant. Sr Barbara Matthews took over when Mother Margaret Mary retired and was responsible for building Kilbreda’s library in 1971.

In 1974, a new leadership model was developed with Sr Marietta Rea coordinating a school with four Principals, Sr Roch, Sr Christina, Sr Catriona and Sr Helen in charge of the primary, junior, middle and senior secondary schools. That year saw the last boys educated at Kilbreda, A few years later the last boarders left and in 1981 the sisters celebrated their final mass here on 8 August 1981. In 1985, Sr Mary Dalton became Principal of Kilbreda, just in time to oversee the building and opening of the new hall, which since her death in 1995, has borne her name.

In the mid-1990s, a building program created much needed Art facilities and extra classrooms and the iconic tower was refurbished following decay from water and sulphur crested cockatoos! Sr Angela Ryan, a former Kilbreda girl herself, took over in 1996, seeing the building program through to completion.

Australian society owes much to the contribution of Kilbreda past students. Both here and abroad, they can be found in various professions, contributing of their talents to many areas of life. At one point in recent years, four local Mayors were Kilbreda past pupils. The current Chief Justice of the Supreme Court of Victoria, is past pupil Marilyn Warren.