My family moved to Cheltenham from Trentham early in 1940, eight months after was declared. My Dad who served in World War One died of pneumonia nearly two years earlier, as a result of being badly gassed in France. 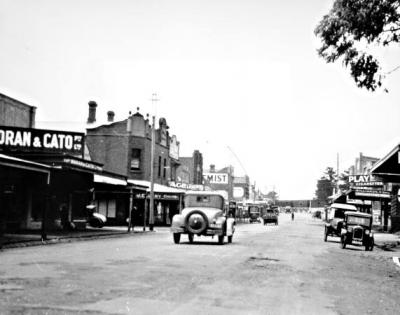 Cheltenham was much smaller in those years. Most homes could be reached with less than ten minute walk from the railway station. Charman Road was then a thriving shopping area and there were also more shops in Point Nepean Road. Station Road was then mainly residential, with some vacant allotments, a State Electricity Depot and a dairy on the eastern corner of Stanley Avenue. Another difference to Station Road in those times was the plantation of plane trees which were set in lawn and divided the roadway for the full length of the road. I recall there were five grocery stores in the town then and about the same number of butchers and banks.

I remember clearly my commencing at Cheltenham State School in Miss Squire’s Grade 3 which was housed in a separate weatherboard building at the back of the main part of the school.

After bombs had been dropped on Darwin, our mothers had to provide for us a canvas back pack containing some of our clothes, so that we could vacate to a country area if the war came to Cheltenham. At the rear of the school buildings, the town rallied and dug slit trenches to provide shelter in the vent of us being bombed. Because of the sandy nature of the soil, the trenches were boarded with timber which came from Eric Kilburn’s Timber Yard; this to prevent them collapsing in. Some folk dug air raid shelters at their homes, so I enthusiastically commenced to dig one on the vacant allotment next door, only to find after less than three feet down, that I had struck water. The vacant block was useful in another way, as I grew vegetables there for a number of years, so helping with the family budget.

During the war, local men were recruited as Air Raid Wardens, whose duty was to walk the streets at night and knock on the doors of houses if light was showing from windows that had not been adequately blacked-out.

Goods were rationed quite severely. Sugar, butter, meat, tea, clothing all required ration coupons and of course petrol for the car. Our family was rationed to one gallon of petrol for a month. 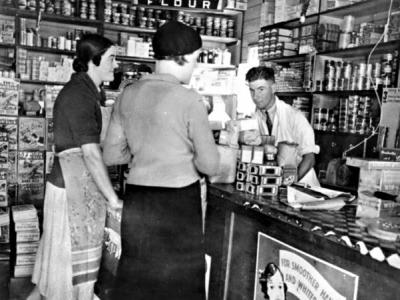 At school we were encouraged to bring money to buy War Saving Stamps and after sixteen shillings worth of stamps, it would buy a War Saving Certificate. Some people who provided large sums of money for the war effort, were rewarded with flights in a sea plane off St Kilda pier. As a Junior Legatee, and a number of other Legacy boys were given a flight in a Sunderland Sea Plane, because of someone’s large contribution to the war effort.

Cheltenham in the war year of 1943 was struck down with a severe epidemic of Typhoid Fever. More than four hundred people were victims of the fever, including over twenty who died. After some months it was considered that a woman who worked on a dairy farm which supplied milk to Cheltenham , was a carrier and may have caused the epidemic. Cheltenham’s’ only medical practioners during those years were Dr Bernard Hudson and Dr Keith Stephenson. Both men were heavily involved dealing with the epidemic, so much so, that both suffered ill health and had to retire from their practices soon afterwards. I remember attending Dr Stephenson’s to receive inoculations to prevent the fever and not only was his waiting room full of people, so was the lounge room of his residence. My family was fortunate, as our milk was supplied by my father’s cousin, John Brownfield who ran a dairy farm on Centre Dandenong Road.