Alfred Francis Bradshaw was born in Tipperary in 1843 and migrated to Australia with his parents in the early 1850s. [1] During his lifetime he occupied almost every position the thoroughbred racing industry has to offer, answering to owner, rider, trainer, breeder, starter, handicapper, journalist and racecourse proprietor. 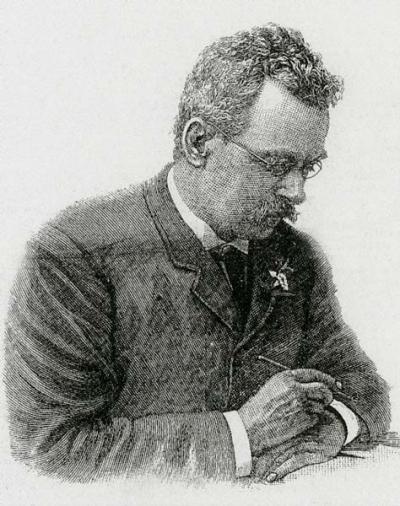 Following the gold rush Bradshaw joined the telegraph department in 1859 and was employed as a telegraph officer in St Arnaud. While there he took up an interest in training racehorses, but was unable to locate stabling for his horse. He didn’t let a little problem like that deter him when he stabled the horse in his kitchen. Bradshaw drifted to Melbourne in 1870 to take up a position as journalist with the racing newspaper Sportsman for whom he wrote under the pen name of Sterling.

On his return to Melbourne, Bradshaw resumed training a horse named Yellow Jack, who was set for a race at Caulfield. On his arrival on course, with two pounds in his pocket Bradshaw found that his new set of registered red and white colours had failed to arrive in time. He quickly solved the problem by improvising when his jockey wore a red jacket with sleeves rolled up with Bradshaw’s best white shirt underneath. Bookmakers offered the odds of 20/1 about Yellow Jack’s winning chances at which price Bradshaw invested his last two pounds. After the horse was successful Bradshaw was later heard complaining the he had lost his shirt on the race after the jockey failed to return his shirt. [2] On another occasion Bradshaw was unable to locate a jockey to ride his horse in a hurdle face at Flemington, so he took the mount himself. 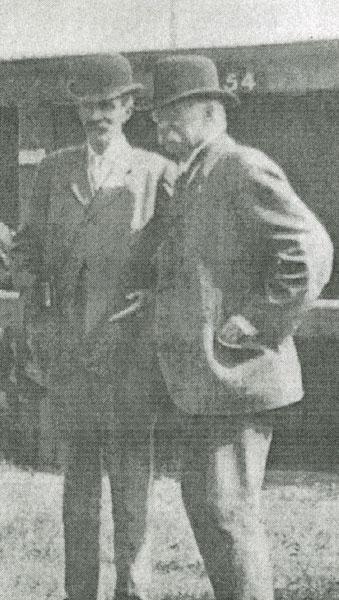 A F Bradshaw on the left, a pioneering member of the Victorian Racing Industry and owner of Richfield Racecourse.

The last photograph taken of A F Bradshaw (on the left), c1911.
Courtesy: State Library of Victoria Newspaper Collection.

In April 1884 Bradshaw was a passenger on a train involved in a major accident between Werribee and Little River from which he received a back injury. He brought an action against the Railway Department as described ‘his woebegone and dilapidated appearance in the witness box, and the tale of his sufferings touched the hearts of the jury, with the result that ‘Braddy’ was awarded a considerable sum in damages. His condition and appearance before and after the verdict presented a remarkable contrast.’ [3]

In later life with failing eyesight, his career as a starter was short lived when he used strong language at the starting post at a Geelong Meeting to the mounted police trooper and the clerk of the course, because he would not come into line. On another occasion he lost his way over to the starting post and was rescued by the clerk of the course. [4]

The Mordialloc Racing Club conducted meetings at the Richfield racecourse come where the ti-tree bloometh on land owned by Bradshaw located on what is now the corner of Boundary (formerly Wells Road) and Springvale roads, Braeside. The property was purchased in 1886 from a retired English judge, G W Elliott. The property consisted of 190 acres where Bradshaw constructed a racecourse, which was described as being 1 ½ miles in circumference, a 132 feet wide straight of 5 ½ furlongs, and an open grandstand capable of seating 500 patrons. [5]

The inaugural meeting at Richfield was set down for Saturday 30 April 1887, but inclement weather forced a postponement until Thursday 12 May. The postponement was to have dire consequences as reported, following heavy rain during the night before and on the morning of the Meeting the one fatal mistake made by the promoters was the holding of the Meeting at this time of year. Had the races been fixed for a Spring afternoon the outing would have been one of pleasure, instead of the discomfort it undoubtedly was. While the going was extremely good the saddling paddock had a consistency of jelly and walking about was rendered anything but pleasurable. Further as the racecourse was situated a couple of miles from the Mordialloc Railway Station the road was cut up badly by the cabs. [6] A second journalist concurred, when he described the racecourse as being located three miles from the Mordialloc Station along a rough bush track infested with snakes. Orthodox buildings are conspicuous by their absence and the substitutes used are of the most primitive description. [7]

The meeting conducted at Richfield on 28 April 1888 ended in tragedy when in the first race on the program, a hurdle, a serious fall involving two horses occurred in front of the grandstand. Iroquois rolled on his rider, George Homes, rendering him insensible. On examination by Doctor Verity of Mordialloc, Homes was found to have sustained concussion of the brain and a fracture of the spine and died shortly after his arrival at a Melbourne hospital.

In an endeavour to close Richfield in 1889 the VRC decreed that the minimum stake money offered at meetings conducted within a twenty mile radius of the Melbourne General Post Office should not be less that £400. Bradshaw circumvented the ruling by offering £200 prizemoney for the 1 ½ mile yellow Hammer Stakes, a race restricted to the progeny of his lightly used sire Yellow Hammer. The race attracted only two starters and was won by Goldbeater, owned by Bradshaw.

Richfield was not a financial success and the final meeting was held on Thursday 14 November 1889. In the middle of the land boom, Bradshaw was said to have refused an offer of £18,000 for the property which would have netted him a substantial profit. [8] The financial problems encountered by Bradshaw were underlined when he failed in an action to restrain a lender of £5.700 from auctioning the property for non-payment of principal and interest. The action proceeded, but the property was passed in. [9] Two complimentary race meetings were conducted for the benefit of Bradshaw, the first being the final meeting held at Elsternwick Park in September 1891 and a second at Moonee Valley in October 1894, but they were not a financial success. 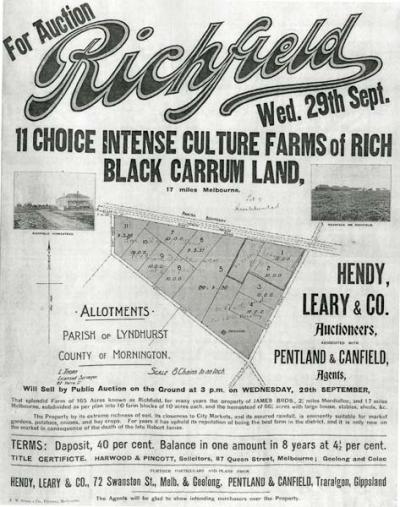 Poster advertising auction of the Richfield property, owned at the time by the late Robert James.

Following heavy rain in July 1891, which caused widespread flooding, Bradshaw’s home was submerged and grave fears were held for his safety. He was rescued later in the afternoon by the local police constable who found the house standing in four feet of water with Bradshaw safe but badly in need of provisions. [10]

Bradshaw conducted a land and estate agency in Clayton, died at his home on 2 April 1911 aged sixty eight years, one of the most popular personalities to grace the Victorian turf.