From a family steeped in racing tradition, Joe Obriem’s grandparents and great grandparents raced horses on a large scale in Yugoslavia prior to WW1. Joe’s father Syd, emigrated to Australia in 1924, and being fluent in fifteen Southern European languages, worked for the Defence Department as an interpreter and translator during WW2. 1 Following the war, Syd worked for the largest thoroughbred trainer in Mentone, Fred Hoysted, before branching out on his own. Syd quickly developed a reputation for being ‘a wonder horse healer with a magic ancient Indian liniment’ with which he rejuvenated the careers of a number of racehorses who had experienced serious leg problems and were regarded as ‘crocks’.2 A fine example was Jovial Lad, winner of the WA Derby, VATC Toorak Handicap and the VATC Invitation Stakes, before bowing the tendons in both forelegs. These problems enabled Syd and a partner to purchase the horse very cheaply for 300 guineas. Jovial Lad comfortably repaid his purchase price winning several good races including the prestigious 1953 weight for age, 9 Furlong VATC Memsie Stakes, which offered 2,500 pounds in stakes.

Joe Obriem was a tracker, or ‘clocker’ as they were affectionately known, working in Mentone, Mornington and Epsom training centres for almost sixty years. In his youth, he lived with his family in Riviera Street Mentone, located just one block away from the Mentone Racecourse. Prior to leaving for school every morning, he would observe the horses walking past the front gate to complete their work. 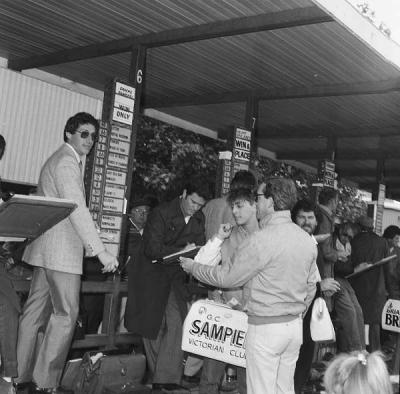 Bookies and punters at Mornington Races, 1984.

Trackmen wrote under the pen name of a horse that they had been associated with or held a special place. For Joe, when working at Mentone, it was Centreway. Joe regarded the young horse, trained by Fred Hoysted, as one of the best horses he had witnessed, but unfortunately the horse broke down as a three-year-old before reaching his potential. 3 Fred Hoysted holds the unique record of winning seventeen Victorian Trainers’ Premierships between 1933 and 1958, and trained the winners of twenty six Group races. The trackmen were employed by the metropolitan daily newspapers and after commencing work at 4.30 am, it was their job to time and record to the split second, the gallops of the racehorses each morning. 4 Up to 200 gallops would be witnessed on a busy morning. The trackmen were highly skilled, recognising a horse by its appearance, galloping action, or the rider, and would be required to time multiple horses galloping at the same time. As well as timing the gallop, the trackman had to assess the quality of the work with his own eyes. Did the horse complete his task with something in hand or was he spent on completion of the work? What was the weight of the jockey and the saddle, and what were the track conditions at the time? 5 The gallops would then be reported in Tuesday and Thursday evening’s Herald newspaper, in the midweek Sporting Globe and various other form guides. On Saturday morning on the radio station 3UZ before ‘Three Way Turf Talk’ commenced at 9.30 am, Joe would describe on air the best track gallops for horses engaged that day. His son Danny recalled the situation when Joe would take the telephone call in the kitchen before going on air, slam the lounge room door shut and tell the children to keep quiet until he had finished speaking. 6

Thoroughbred racing then was very different to now, as horses are required to compete in public trials before being approved by stewards to perform on a racecourse. In earlier times the trainer of a young horse tried to keep the horse’s identity secret, so that for its first appearance on a racecourse, a good price could be obtained from bookmakers who knew little of its ability. Joe recalled the following incident at Mentone.

Bill Murrell trained one of the best gallopers, Citius. The bay filly won her early races and was set for a test. On the Tuesday before her engagement, the clockers were out early, but the main house gate was locked, tied with wire prohibiting entry, and they were unable to time her gallop. When asked later how his filly had worked, Murrell responded ‘very easy, doesn’t need work’. Her main rival worked at 8.30 a.m. on a cut up track. The odds were even level prices when betting opened. Backed off the map, Citius steamed in. 7 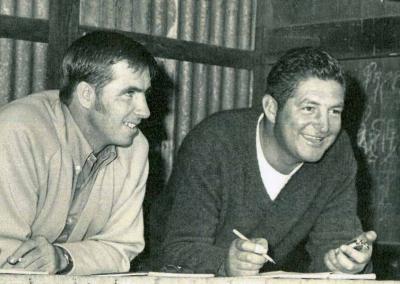 The ‘Clocker’ at work at Mentone.

The following are Joe’s reminiscences about what he witnessed at Epsom.

I got a job as clocker at Epsom when Frank Hannah Parkside retired about 1974. I had previously been at Mornington for a couple of years and prior to that, was at Mentone starting out as a school boy in 1943, with Tom Sullivan Mistico and Len Walters Rapier, when Len came out of the army. Tom and Len, along with Frank Hannah were the original track watchers when the Sporting Globe commenced employing clockers around 1926 or 1928. They certainly knew what they were about being accurate timekeepers and having a canny ability to recognise a horse when galloping.

Mentone was a natural training track with excellent sand and grass, and it was a big loss to the industry when it closed in 1972. Mornington also made a big improvement under Ted Moore’s care and was turned into a first-class training facility. Epsom was also transformed into a quality centre for horse training, taking a host of Mentone trainers and their gallopers to join the likes of Jim Maloney, George Hanlon, Tommy Woodcock, Owen Lynch, Ray Hutchins, Ian Saunders, George McCormick, Jack Besanko and Bon Hoysted who came to Epsom earlier. 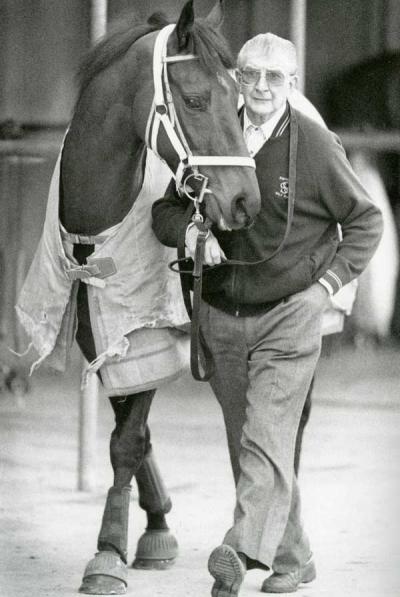 Bob Hoysted at Epsom with Citizen.

Bob Hoysted remained at his Mentone stables and floated his team to Epsom. Rose of Kingston, a topline filly, won the 1982 AJC Derby, and Bob took over the training of Manikato following the death of his brother Bon, and what a champion he was. Another champion sprinter trained at Epsom was Vain, and you could argue forever on their respective merits. Family of Man and Taras Bulba were top gallopers trained at Epsom by George Hanlon, not to mention his three Melbourne Cup winners, Piping Lane, Arwon, and Black Knight. Ray Hutchins also trained a Melbourne Cup winner in Gala Supreme. Reckless, trained by Tommy Woodcock, was another super stayer. A number of New Zealand trainers, while in Melbourne, also preferred to base at Epsom, the Caulfield Cup winner, Swell Time and the mighty Bonecrusher, come to mind.

John Hawkes was an early visitor to Epsom and won many big races before settling here. He conducted a successful stable before moving to Sydney to train for the Ingham Brothers. Octagonal was one of the best to train at Epsom for his Melbourne campaigns. The Freedmans took over a large complex and had Naturalism, Sub Zero, Mannerism, and Schillachi learning the ropes at Epsom. Crisp was educated in the Epsom Hurdle Trials and won successive Hurdles when ridden by the legendary Ron Hall before Tom McGinley took over. Crisp eventually became internationally famous for his deeds overseas.

When Brian Mayfield-Smith came to Victoria for the Spring and Autumn Carnivals, he trained at Epsom and produced many winners.  He was the man to stop Tommy Smith’s hold on the Sydney trainers’ premiership.  Clarrie Connors was another top Sydney trainer to trial and gallop his Carnival hopes at Epsom. 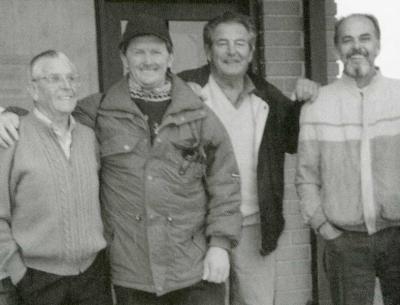 As you can see there was no shortage of good horses to watch in their work and preparations and some great trainers stood out, but I think in fairness to all trainers, they are the backbone of the industry, putting in unbelievable hours of unpaid work, diligence, worry, travel, and the struggle to get a champion horse. The closure of Epsom was another obstacle, but as the saying goes “that’s racing”.’ 8

After a lifetime of racing, Joe Obriem passed away in 2019.