An old house in Florence St was purchased as the site for a shop/warehouse as it had street frontage and a side laneway for deliveries. The house had been rented by the previous owner and I remember some difficulty in getting the tenants to vacate after the sale went through. I believe it got to the point where the new owners were able to remove the roof of the house, but they were not able to demolish the walls. This finally began to take place, overseen by the presence of the Sherriff’s Office and police officers, before the tenants finally agreed to vacate.

The shopfront, now the NAB, had double glass doors in the centre of the site with a large window on each side of the doors. The shop portion was perhaps 25-30 feet deep and the full width of the site. Pet requisites, some hardware and now garden products were the key lines stocked. The warehouse was separated from the shop by a partial wall which allowed pedestrian access between the shop and warehouse around each end. Immediately behind the shop were the bins, some relocated from the lean-to in Como Parade and a series of new steel framed and flat iron ones was added. The range of products held expanded greatly. Wheat, oats, pollard, bran and layers pellets were still in demand but there was now budgie mix, canary mix, millet, barley, rolled oats, sunflowers, maize, parrot mix, pigeon peas, milo(sorghum), growers pellets, chicken bits and probably several other grains. 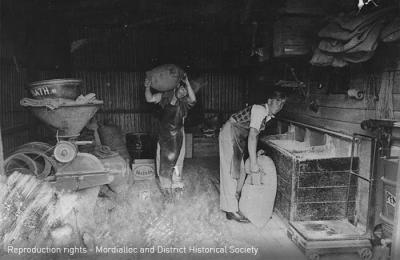 ‘The boys’ working in the grain section of Robins Stores, Mentone. The machine on the left in the image is a grain rolling mill, c1948.

The main warehouse held stacks of bags of chaff and hay plus bags of most of the products mentioned above. The back corner of the warehouse facing the laneway was a cantilever roof with three metal roller doors suspended on the cantilever. One door was across the rear and two facing the lane. Trucks were able to drive up the lane and then reverse into the warehouse when the doors were raised. Behind the warehouse and protected by a piping and chainmesh gate, there was a roofed landing where briquettes, molasses and other grubby products were stored. A small metal roller door was also half way up the lane where customers could pull up and collect a bag or bale or two or smaller parcels of products. This doorway can still be identified by the repaired brickwork.

Bags and bales were mostly handled manually, and while some products were still delivered on the rail, road transport was taking over. Semi-trailers would be requested to approach from the west in Florence St, and with traffic not so heavy in those times they would jack-knife the trailer and reverse up the lane. A lease was also obtained for the rugged shed in the laneway that is now known as Granary Lane. This shed had a large roller door on the north end and trucks could drive in from the south and drive past the shed and again reverse in. Hay and bedding straw were mostly stored in this shed. One delivery truck was garaged in the warehouse behind the shop while another one was in the shed in Granary Lane. A smaller delivery truck was garaged behind the gate at the rear of the Florence St site. I am not sure when, but the shed in Granary Lane was eventually purchased by Bill and Frank.

Hay and grain were a magnet for mice and sometimes rats, so cats were kept in both the main shop and the warehouse in Granary Lane. Of course, these had to be fed and watered daily so even on Sundays somebody had to attend the business. At a young age I was called upon to do some Sundays and long week-ends feeding the cats. This made me feel extra important as I had the keys to the shop. Not sure you would send an 11 or 12-year-old on their own to open up now-days.

Two full time delivery drivers were employed with Charlie Smith, moving across when Robins Stores closed, and Len Lovell joined soon after and they both were loyal and valued employees who remained till the business closed.

Deliveries sometimes caused angst with delivery drivers being stressed as to their ability to reverse into the lane, although once they had been a couple of times they became aware of how to position their truck to reverse up the lane. On one occasion, when I was present, a delivery driver new to the round refused to try to back his semi in and was persuaded to have a cuppa with Frank while ‘some parked cars were moved’ to give more room to manoeuvre. Before the driver knew it, Bill, a skilled truck driver, was coming up the lane backwards in his truck ready for unloading.

Cars parking and blocking the lane was a constant issue and a burly workforce often shuffled a vehicle sideways out of the way. A small Austin with only the driver’s door unlocked and the keys in the ignition was once placed hard against the wall of the shop to the east of the lane. Not sure how the lady dealt with that one. 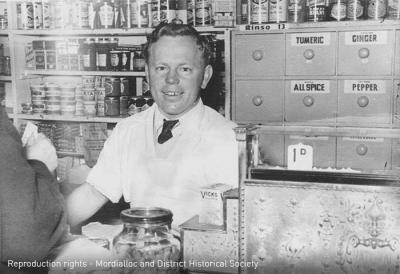 Frank Robins working in the store. Note the spice draws, the cash register with old currency, and the stacked shelves.

One hazard of relying on purchasing hay and other stocks based on seller recommendation was quality, and the business had a network of reputable suppliers but sometimes issues arose. Hay pressed too green was a concern as it can heat up to the point of combustion. I remember coming home from tech school on one occasion to a request for assistance to unload a rail truck urgently. When I arrived parts of the steel wagon were too hot to touch, and the bales had to be off loaded and spread up and down the rail yard and left too cool and dry before they could be stacked.

Bedding straw was mostly sourced from “Ewart Pastoral Company” of Murchison and was delivered in a semi load early each Thursday morning. During much of my time at Tech school, I joined my uncles at about 5.30 in the morning to unload straw into the shed in Granary Lane. It normally took about one and a half hours to manually unload and stack perhaps 350 X 1kwt (50kg) bales. I suspect Heather Ewart of the ABC program “Backroads” would have some connection to the Ewart Pastoral Company.

As the demise of the training tracks at Mentone and then Mordialloc became obvious, some trainers moved on and deliveries were required to more distant locations. Most trainers continued as customers, but Caulfield and Cranbourne, particularly Caulfield, became weekly or more frequent delivery runs. I particularly enjoyed these longer trips as a ‘jockey’ on the truck during the school holidays. One delivery I distinctly remember was a truck load of hay, chaff, oats and bedding straw to the south wharf for loading on a ship. We were instructed to drive into a warehouse and unrope the load but under no circumstances unload anything. The wharfies would instantly walk off the job if anybody touched their work. Never were bales or bags handled so badly and I’m sure many items would never have made it on board the ship.

JD Variety Centre on Como Parade on the former location of Robins Stores, 2017.

Mentone Produce became a major outlet for pet supplies and Bill and Frank employed a succession of retail staff as they were unable to cope and manage the rest of the business while serving customers. Bob Angie is the only name I can recall, although there were several women who were employed. Even when I was at Agricultural College I was welcomed during the longer summer break to help with the rush leading up to Christmas and then while others took holidays during January.

Retirement beckoned in the mid 1970’s and without a legitimate purchaser the business was closed, 1975 I think. One of the drivers, Len Lovell, purchased ‘his truck’ and set up a new business, Mordialloc Produce, off Governor Road, which was mainly servicing the racing industry, but I gather as the trainers moved on this business became unviable. The name of Mentone Produce was allowed to be resurrected by a business in a shop in Mentone Parade about half way down from Florence Street to Brindisi Street, but it was mainly pet supplies with a more limited range of products.

Some facts to give context

Wheat, for instance, commonly varies between 62lb and 68lb per bushel and even greater in exceptional circumstances. In order for consistency a standard weight was established for the sale of grains, so wheat was set at 60lb per bushel, barley 50lb per bushel and oats 40lb per bushel. A three bushel bag of wheat was therefore 180lb plus 2lb for the jute bag. No mean feat to lump (carry on your shoulder).

Bales were often referred to as the number of bales per ton (imperial). Twenty to the ton meant that each bale was on average 112lb, which was a pretty solid bale. Straw was regularly packed at this density while hay sometimes made these weights but were more often 25 or 30 to the ton and so somewhat lighter.

The produce business was therefore manually handling these weights on and off all day every day. Imagine the frustration when a bag of wheat was shouldered for a customer who said their vehicle was just out the front but it was in fact half way up Florence St to Davey St.

These practices would not be allowed today.