The Musserts came to Dingley in 1947 and settled on a seven-acre (approximately three hectares) property purchased from Charley Gartside (Gartsides Canning Factory).

Gwen Mussert was a single mother with two young children. In those days there was little or no social welfare, so you either did what you had to do to take care of yourself and your family, or you sought charity from the Church or other such groups. Gwen Mussert was the kind who took care of her own. Gwen’s first source of income was from working on Gartside’s canning lines, which she supplemented by selling eggs from the roadside. Vegetables for the table came from her own garden, or what could be traded from the neighbouring market gardens.

At this time the disease Tuberculosis (TB) was a World-wide killer and Australia was not exempt. Gwen had a nursing background, and she somehow wrangled it that the nearby Heatherton Tuberculosis Sanatorium moved a small number of chronic patients to her care at her Dingley home. Unimaginable today! With government controls and regulation as it is such facilities are only within the reach of multi-million-dollar businesses. The income paid to her by the Health Department for caring for these poor young people kept the family afloat. Over time Gwen built a creditable reputation with the health authorities with patient survival ratings which ranked very favourably with the official sanatoria.

In the absence, then, of drugs to combat TB, Gwen’s nursing strategy was fresh air and good, solid food. Her patients got much of both. She fed up her young patients with copious quantities of old fashioned ‘stodge’ food and accommodated them in bungalows away from the household which were built so as to totally expose the patients to fresh air. Summer and Winter these ‘TBs’ endured total exposure to Mother Nature – and it worked, most recuperated.

Gwen’s housing of people afflicted with a disease that was contagious when in a confined environment did not go down well with many of the Musserts’ neighbours who lobbied hard for her to be closed down and the family cast out of the district. But Gwen Mussert was always up for a good fight, and her and her TB patients survived until the worst of the epidemic was over in the early 1950s.

Contiguous with the TBs, Gwen gave over rooms in the family home to dependent elderly people; those who needed care, but either didn’t have family, or whose family couldn’t (wouldn’t) care for them. This was a time when care of the elderly was largely the realm of the charities, augmented by a few small private operators. Government controls were few, so the cost of regulation had not yet impacted. At the same time, the absence of regulation gave opportunity to unscrupulous practices, and the emergence of a well-run, ethical establishment was welcomed. Gwen never lacked for want of residents.

Merriegum in those early years was also a refuge for unmarried girls who found themselves pregnant. In the 50s and 60s, pregnancy outside marriage was a terrible stigma for young women. With or without their family’s support they would be packed off (anywhere) to remove them from the eyes of their community and from the shame which attached to the family. Lack of welfare support, and the hostility of society, meant that the girl had virtually no opportunity to keep her baby. Adoption was virtually forced – no matter whether or not that was the girl’s own personal preference. Merriegum gave them a refuge where they were not known, where they could go through their pregnancy, and then recuperate, before re-starting their lives. 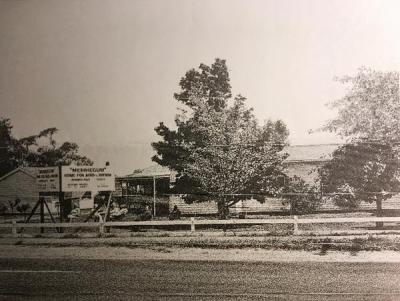 In return, Merriegum had the benefit of their labour (during their early months) around the home. Exploitation? Or a mutually beneficial arrangement? Sufficient to say that Gwen Mussert maintained warm relations with many of these girls in later years so, hopefully, they didn’t feel too exploited. But without any doubt, for each one of these young people, this was a terrible, emotional, indeed heartbreaking, time for them. Just imagine, if you had to go in secret through a pregnancy, birth and the surrender of your child on your own, without the support and comfort of a loving family. And to then go home never to speak of it again.

Merriegum grew like topsy, with ugly additions added on to the original two bedroom farmhouse as the demand for its services grew. But, eventually, a new era of high-powered government regulation came to squeeze out the smaller private care provider. Gwen Mussert succumbed to her own advancing years, and to the pressure of regulation Merriegum closed and was bulldozed in the mid 1960s.