While it is more than likely that the Gladesville Group of companies will be credited with the commencement in 1974 of the development of the Patterson Lakes canals and quiet lakes, and ultimately creating the suburb of Patterson Lakes, I will venture to suggest that this development first had its origins some 20 years prior.

In the 1950s, just a few years following the end of the Second World War, private boat ownership was becoming popular around Port Phillip Bay, and particularly so at Carrum with the opportunity for fishing and pleasure boats to enter the Bay from Patterson River.

Mr Alfred Priestly had inherited the family farm at McLeod Road Carrum, with the farm’s northern boundary being the bank of Patterson River. Alf Priestly on recognising the growing enthusiasm for private boat owners to use the river to enter the Bay for fishing and pleasure cruising commenced developing boat launching ramps and later marinas on the family farm property

Alf obtained the approval of the Dandenong Valley Authority, who had governance of the river, to undertake the provision of the first launching ramps on the southern banks of Patterson River.

As Alf’s business of launching of private boats grew, and with boat owners seeking to leave their boats and trailers at the farm, Alf took the very basic step of boat storage by utilising the farm’s former chicken sheds by concreting the floor of the sheds and using the farmer’s tractor to transport the boats to and from the launching ramps. 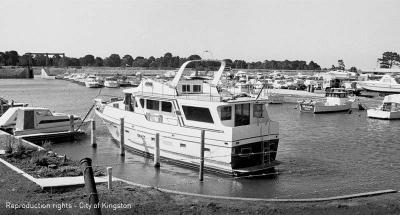 As the boating activity boomed, Alf set about establishing a marina, a first on Patterson River. Later he developed a second marina which he named ‘Inner Harbour’ and which today is the harbour at the Patterson Lakes shopping centre.

It is my view, that life time local Carrum citizen, Mr Alf Priestly’s early use of his land and Patterson River for private boat owners, and his building of two marinas, demonstrated the opportunity and scope for utilising Patterson River waters for persons wanting a water environment and accessible mooring of their private boats with ready access to boating on Port Phillip Bay.

In life, many significant developments do commence from a small perhaps insignificant beginning. It is my view, the Patterson Lakes suburb today has its origins from the early boating facilities established by the late Mr Alfred Priestly on the family’s McLeod Road farm.

This story first appeared in the Newsletter of the Chelsea and District Historical Society.