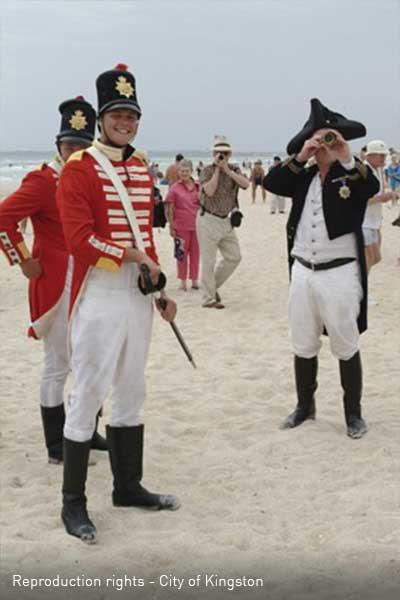 Re-enactment of the landing of Charles Grimes, Surveyor General of New South Wales on Long Beach in 1803. Marine Paul Winnell and Stuart Petchey as Charles Grimes.

A convict settlement established at Western Port. The settlement was abandoned in 1826.

Hovell explored the Country from Cape Patterson to the Koo-Wee-Rup Swamp, thence to Port Phillip and Frankston. He followed the coast to Point Ormond and returned along the coast after rounding the Carrum Swamp.

Joseph Stewart squatted on the Dandenong Run, taking in the Long Beach.

The Long Beach run was transferred to James McMahon in 1852, who obtained pre-emptive rights to the land where he built Half Way House or The Long Beach Restaurant later the Long Beach Hotel, now the site of the Riviera Hotel.

An Aboriginal Depot was established south of the Mordialloc Creek about this date.

The first bridge over the Mordialloc Creek was being built.

A Farmers Common established on the Carrum Swamp.

First land sale The Long Beach Allotments in the City of Chelsea, December 22, 1865. 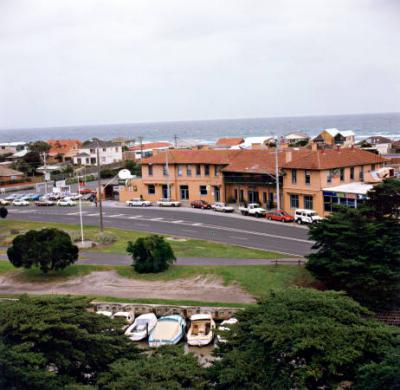 James Nixon also took up land and his selection covered the area on the east side of the Carrum Railway Station.

George Whitehead selected 300 acres north of Nixon and it was between their selections that the Patterson River was later created.

The Patterson Cut to drain he swamp cut through to the sea.

First train from Mordialloc to Frankston travelled on the single line on July 31. The regular service commenced the next day, August 1.

Methodist Church Services commenced for people living on the Carrum Swamp in rooms of disused Richfield Racecourse situated on the Corner Wells and Edithvale roads.

A fire destroyed a large area of the foreshore.
Methodist Church at Carrum opened.

The first meeting of St Aidan's Church, Carrum was held following the efforts of Mrs Black and Mrs Guinn in convincing the Anglican authorities that a Church of England was needed in the district.
Image L248 Mrs Armstrong centre, a founder of St Aidan's Anglican Church Carrum with Rev C T Holloway vicar, and Miss Nellie Somerville. Last service to be held in that building before construction of new church. 1964 Courtesy Leader Collection, City of Kingston.

Land was offered along the beach front at £25 per acre.

The first meeting to establish the Mechanics Institute held at Carrum.

The Chelsea Congregational Church was the first church to hold regular meetings in Chelsea, commencing at the home of Mrs. Kriss, Williams Grove. The church was built that year with the official opening on October 29. 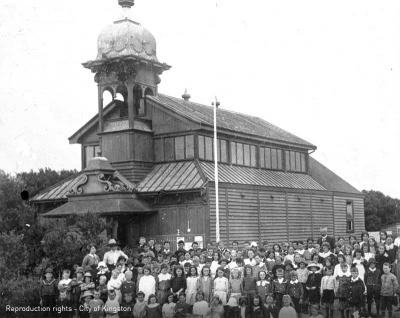 Hoadley’s Hall, the Joss House, staff and some pupils at school. Taken in 1913 a year after Chelsea Primary School began.

The first meeting of the Anglican Church was held at Argyle Crossing.

The Carrum and Chelsea Volunteer Fire Brigades were formed.

The second fire along the sea front destroyed most of the houses between Chelsea and Bank Road, Aspendale (now Edithvale).

The first service held at the St Columba Church in Lochiel Avenue on June 1, following the laying of the Foundation Stone on May 10.

The Aspendale State School (now Edithvale) was opened with 30 pupils. Aspendale at that time extended to Berry Avenue. 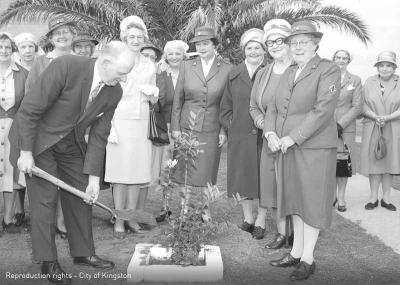 Chelsea Methodist Church built by working bee in one day, in Sherwood Avenue.

A Repatriation Committee was formed at Chelsea to assist men and women returning from the war.

Chelsea and Aspendale Football Clubs in B Division of Federal League.

The weekly newspaper the Gazette established with a part time office at Chelsea, in opposition to the Cheltenham based Seaside News.

The first Council of the Borough of Carrum was elected on June 10.

Mr W B. Thomas appointed own Clerk served to 1930.

The newly established Borough of Carrum Gazette published by W.A.

Young's Frankston Standard opens a full-time office at Chelsea with Mr Albert Ludford in charge in 1923, followed by Mr Roy Beardsworth in 1924.

The Church of Christ Missionary started at Chelsea in a marquee set up on the north-east corner of The Strand and Bath Street. The Mission was opened every night during the summer and attracted much attention.

Chelsea Palais built in The Strand.

The City of Chelsea was proclaimed.

Aspendale Racecourse closed to horse racing but remained open for motor and motor cycle racing until the start of World War 2. 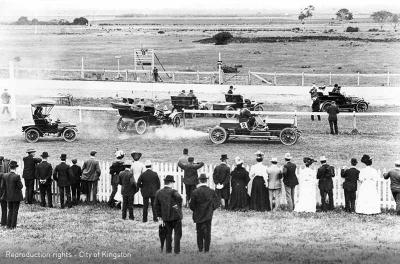 The Centenary Clock erected. The Clock was donated by the Carrum Electricity Supply Company, the bricks and building material by Council, and it was built by the unemployed of the district.

700 homes were flooded during the December devastating flood.

A wooden Presbyterian Church was brought from Alphington and moved to the site in Sherwood Avenue on 3 July.

A Civic Service was held at the Fox Theatre attended by the Mayor and Councillors, church leaders and 220 others.

The first church service at St Andrew's was held the following Sunday.

By this year the population was 8000 and the City was still progressing steadily despite the severe trade depression.

On the death of First Constable Gilding, a water font was erected in his memory by grateful citizens.

A severance committee was formed at Aspendale with the idea of the area becoming part of Mordialloc. A majority of Aspendale ratepayers voted for severance, but the Government Advisory Board did not support the move, and Aspendale remained a valued part of the City of Chelsea. 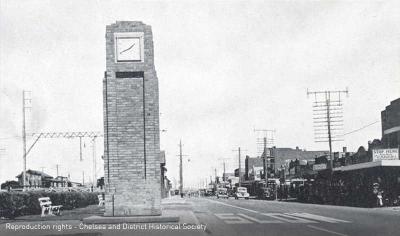 A flood occurred in July when flood waters breached the right bank of the Patterson River. The resultant overflow ponded in the low areas at the back of Chelsea.