Clarice Beckett, who exhibited each year in Melbourne in the 1920s and early 1930s, was largely ignored in her lifetime, for various reasons: most of her works were small and ‘misty’, the antithesis of the heroic landscapes that most critics and the public preferred; she was, briefly, a student of the divisive tonalist painter Max Meldrum; and of course, she was a woman. 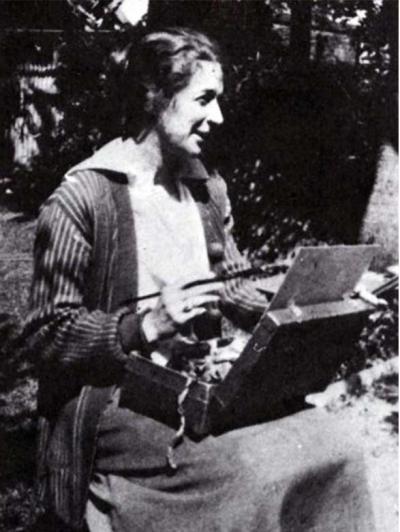 Clarice Beckett painting in yard at her Beaumaris home. From: Rosalind Hollinrake, The Artist and Her Circle.

She would have remained a footnote in Australian art history if not for Hollinrake's Beckett obsession, which started 50 years ago when Clarice's sister Hilda took her to an open-sided shed in the Victorian countryside, near Benalla. Stored there, for 30 years, were almost 2000 Clarice paintings, exposed to the elements, rats and possums. Hollinrake wept at the sight. But she managed to save approximately 370 works, exhibitions were staged around the country and Beckett was finally acknowledged as one of Australia's finest painters, with her own unique vision. The total surviving ouvre of Beckett works number around 600.

Clarice Marjoribanks Beckett was born in 1887 in Casterton, where her father Joseph managed the Colonial Bank (the building is still there). Clarice was a great-granddaughter of John ‘Como’ Brown, the third owner of the South Yarra mansion, which he transformed to a grander scale.

Her maternal grandfather was Thomas Brown (no relation to ‘Como’ Brown), who was a wealthy landowner in Victoria.

After attending primary school in Casterton, Clarice, her mother Elizabeth and sister Hilda lived in Ballarat so the girls could study at Queen's College while their father remained in Casterton. (The Becketts) first child, Alfred, was born with an intellectual disability and died at Kew asylum in 1899, aged 17. Clarice, who loved poetry, music and art, wrote a secret poem about her brother after his death.) 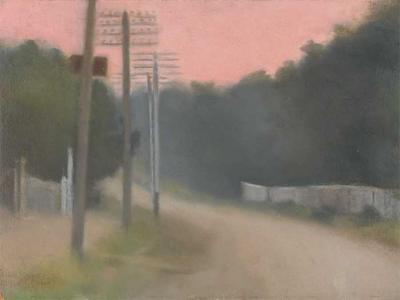 Between 1904 and 1907, the family lived in South Yarra (at various addresses), then moved to Bendigo, where Joseph managed the Colonial Bank in Pall Mall until 1919. The family lived at 267 View Street (still extant), one of Bendigo's most prestigious addresses.

When Joseph retired, the family of four settled in Beaumaris, where they had holidayed, and which has become synonymous with Clarice's work.

She captured the ever-changing moods, landscapes and seascapes of this bush idyll by the sea, becoming a familiar sight along the cliffs and beaches with her homemade painting cart, occasionally selling works to passing admirers. But she sold few works at her annual exhibitions and was regularly savaged by critics for her ‘befogged landscapes’. 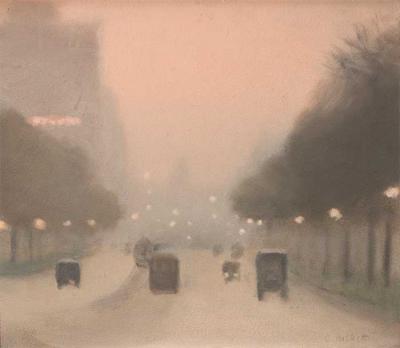 It is this soft-edged, ‘misty’ quality of her works that speaks so powerfully to Beckett fans today.

The light of early mornings and evenings, in particular, stirred her soul. She captured that essence in luminous paintings of silver ocean at moonrise and pink whispers of sunsets and, just as evocatively, wet nights and grey days, soft green trees and brilliant blue or storm-tossed seas.

She painted wet nights in Brighton, taxi ranks and passing trams in the city, cars and telegraph poles, petrol pumps and bridges. She turned the ‘banal’ into pure poetry. Occasionally she ventured further, to Anglesea and Lorne, Phillip Island and the Mornington Peninsula, Warburton and Olinda. But she never left Victoria, let alone travel overseas as many fellow painters did.

In 1925-26, she stayed five months at Naringal Station at Wallinduc, west of Ballarat, owned by the brother of her friend, Maud Rowe, who had also studied with Meldrum. Her light-as-air Naringal paintings are a highlight of the Adelaide exhibition. For the first time in her life, Clarice had a studio ‐ on the upper level of a shearing shed with an expansive view of the golden Western District landscape. It was a pivotal moment in Australian landscape painting, noted for its minimalism that conveyed so much. Curator Tracey Lock says of one work, Summer Fields:

In a tiny frame she managed to capture that limitless expanse and radiating heat we can all identify with in the Australian landscape.

She got there before me. 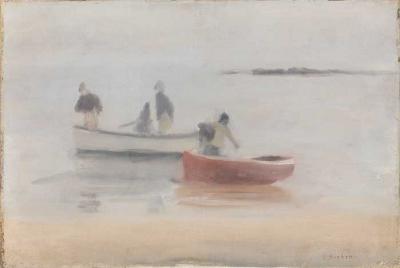 The Rowes were great supporters of Clarice and bought more than 30 of her works, most of which were lost when Naringal homestead was largely destroyed by bushfire in 1944.

In a bizarre coincidence, the very same day that Naringal was lost ‐ January 14, 1944 ‐ 60 homes in the Beaumaris area were burnt or damaged by bushfire, among them the Becketts' former home in Dalgetty Road. (The Country Fire Authority was established a year after that horrendous summer.)

Eight years before, her father authorised his nurse to burn his daughter's paintings in the yard, after Clarice had died.

They couldn't move for paintings in Dalgetty Road,

Her father's aide started the bonfire. He loved Clarice but didn't understand her.

However, just before he died in 1936, Joseph, Hilda and Max Meldrum held a memorial exhibition of Clarice's works.

Tragically, Clarice died at just 48, a year after her mother, whom she grew closer to in their final years. Clarice painted in all weather, a habit that would lead to her premature death from double pneumonia in July 1935. She was buried in Cheltenham Memorial Park, where her mother had been laid to rest and her father was to follow in 1936. (Their graves were restored in 2011, courtesy of the Friends of Cheltenham and Regional Cemeteries.) Her sister Hilda (Mangan) died in 1980. The Beckett line has continued through Hilda's children. 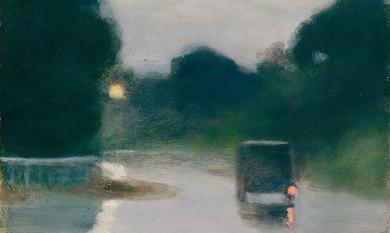 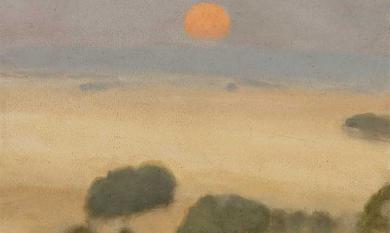 The Clarice Beckett exhibition : The Present Moment runs from February 27 to May 16, at the Art Gallery of South Australia, North Terrace, Adelaide. Details: agsa.sa.gov.au