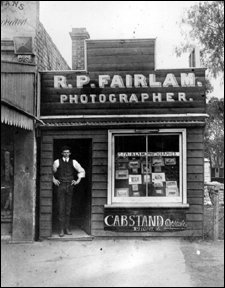 Percy Fairlam standing in the doorway of his shop in Charman Road, Cheltenham with a window display of his photographs.

At the turn of the century, a little wooden shop front stood opposite the cab stand at Cheltenham railway station. A large handwritten sign boldly advertised its purpose: R. P. FAIRLAM - PHOTOGRAPHER. It was during his twenties that young Richard William ‘Percy’ combined his great artistic talent and inherited business skills by establishing this photographic venture. Strategically positioned next to his family’s business in Charman Road Cheltenham, the elegantly groomed Percy would stand in the shop doorway attracting customers and observing the community used as his main photographic subject.

Percy produced a significant study of the natural and man-made surrounds of Cheltenham. He was particularly fond of beachscape environments and produced beautifully considered views of nearby coastal scenes; The Beaumaris and Mentone Beach cliff faces along which local families had taken walks, the seabaths in which they would have enjoyed a refreshing dip, the rock pools off Ricketts Point where children would have fossicked for sea creatures or the boat shed and jetty where the Keefer family provided succulent mussels and other shellfish. 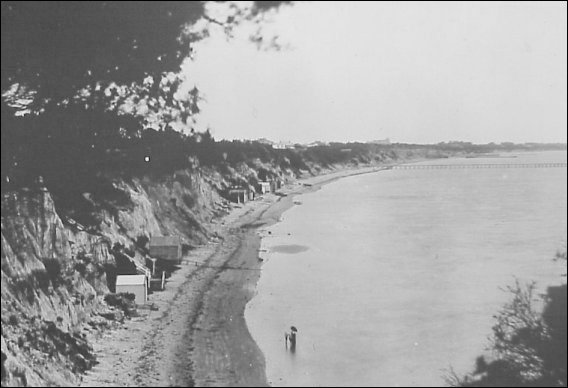 Cliffs at Mentone Beach at foot of Charman Road c1916.

To record these landscape scenes, Percy would have used a large format ‘view’ camera: that is, a camera built like an accordion, with a lens at the front and a glass viewing screen at the back. Images were formed by light travelling off the chosen subject, through the camera lens and falling onto the back viewing screen. Photographers focused their subject by moving the lens end of the camera forward and back until a sharp image was achieved. The image projected on the viewing screen was not very bright, so to aid his judgement, Percy would have placed black cloth over his head and the back of the camera. Once satisfied with his composition and focus, he would then be ready to expose the image.

Instead of roll negative film as we know it today, Percy would have used ‘quarter-plate’ negatives to capture his images. These flat glass plates were placed within a light-tight housing, which slipped into a back section of the camera. A protective sleeve was raised within the housing, lens cap removed and an exposure would be made of the object onto the light sensitive material coated on the glass plate negative. Once the exposure was complete, the ‘dark slide’ housing could be taken into the darkroom and the negative processed by hand. Because Percy’s view camera was made from wood with brass fixtures, it was necessary to always carry a tripod to mount and steady the camera for shooting. These early view cameras were adequate for large format work such as landscapes but very slow and complicated in operation for other subject matter.

Much of Percy’s other work of this period included extensive studies of the local township, including streetscapes, buildings, and local landmarks. Studies included the Cheltenham Hotel on Nepean Highway (now the Tudor Inn), the original ‘Cheltenham Post Office, the Church of Christ, the Mechanics Institute and the Boys Home (on what is now the Southland site). He also became renowned for shooting from daring positions; one ‘aerial’ view over Cheltenham (1908) was taken after climbing a giant pine tree near the Cheltenham Primary school grounds. To allow for more flexibility and exploration of subject matter, Percy would have used an early twin-lens or single-lens reflex camera; such as the fashionable Kodak Box Brownie. 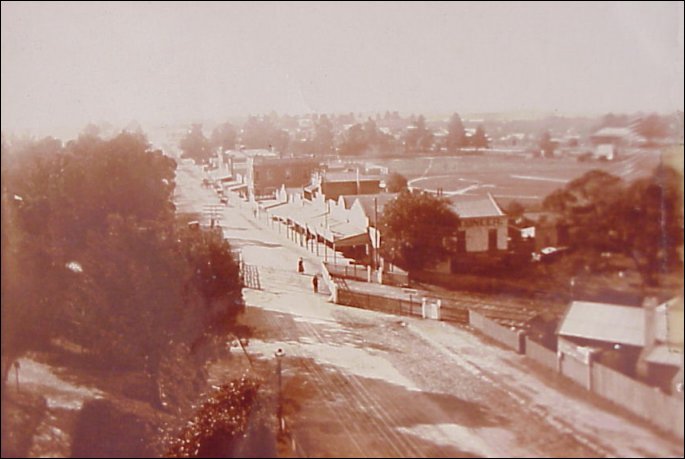 From a pine tree, an aerial view of Cheltenham.

Visitors to Percy’s Photographic shop could purchase pre-mounted prints ready for hanging in their homes or ‘picture postcards’ consisting of selected scenery images with fancy handwritten advertising messages. In the tradition of classic souvenir cards, Percy celebrated the ‘Beauty of Beaumaris’ and the ‘Charm of Cheltenham’ beach scenes. 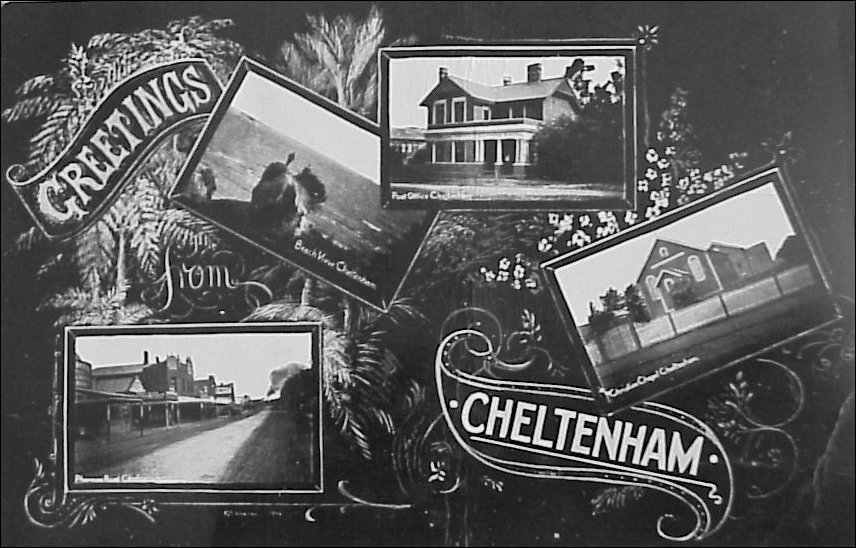 Percy had developed this advertising technique whilst visiting the township of Cowes on Phillip Island. As a young man, he had the opportunity to work at Gulliver’s General Store in Cowes. On his days off, Percy would photograph the environment of this Bass Strait Island; the rugged and stark Pinnacle and Nobbies Rocks, the powerful waters of Woolami Beach, the Jetty at Cowes under moonlight, and the romantic walk of Lover’s Lane. It was after befriending the Kennon Family (who ran the Genesta Guest House in central Cowes) that Percy began producing advertising cards for that business.

But Percy’s photographic career was disrupted by the outbreak of World War One. Percy joined other enlisted men and began training at the Seymour camp in regional Victoria. Throughout this period and the subsequent sea voyage to France via England, Percy documented both the preparations for war and the comradeship developed between fellow recruits. Photographs show the variety of drill exercises as part of everyday camp routine, many rest and relaxation events, and the long journey to Europe. These images reflect the recruits' anticipation of adventure, quest for travel and contemplation of what was ahead.

Percy arrived in France with the other 10th Field company of Engineers during November 1916. He would wake each day at 6.00 am and travel through a mile of rat infested trenches, working with teams to repair damaged areas. Sometimes Percy would awaken to the sound of screeching shells passing overhead. On the 4th of January 1917, shrapnel from one of these shells wounded him in the right shoulder. Because of this injury and imminent evacuation to hospital in England, Percy was separated form his personal possessions. Photographic evidence of this war period is lost.

As part of his repatriation and recovery from injuries in France, Percy found himself photographing the English countryside, particularly the scenery of surrounding village settings. He created a series of picture postcard images of thatched-roofed houses, pretty gardens, flowing rivers and streetscapes. This series of images directly relates to landscapes images previously shot in and around Cheltenham and Phillip Island, but extends the theme to include the community setting. 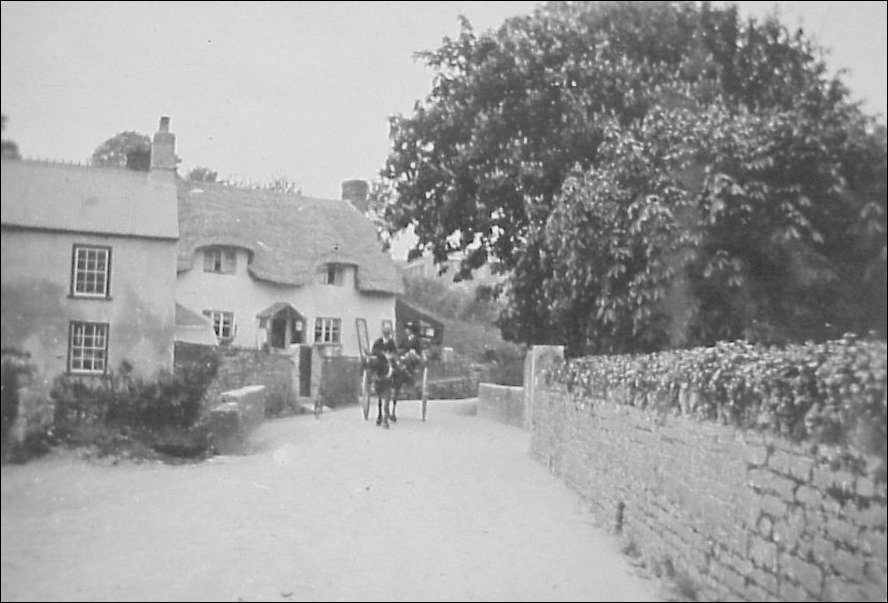 Percy returned to France, joining his company at the front for another two years of service. He returned to Australia in June 1919, to start his new post-war life; which included marrying Ruth Reid (one of the daughters of the Kennon family from Genesta House on Phillip Island) in 1921 and the eventual full-time management of the general family business.

Although no longer pursuing a professional career in photography, Percy continued to produce a significant quantity of images documenting both formal and informal settings. One delightful series shows his daughter Betty sitting down to an afternoon tea party with her dollies and teddy bears, another captures the joyous family snapshots of warm beach vacations at McCrae, whilst a solemn document records some of the treatment given to their eight year old son Bill, struck down by the world-wide epidemic of Polio in the mid 1930’s. These images highlight a more sensitive and emotional personal photographic journey of family, friends and daily domestic life.

Throughout his life, Percy Fairlam used his camera as a creative tool and an instrument of commerce. His images of landscapes and nature, documentation of social history, and use of photography for advertising, not only present a visual insight into the career and passion of this man’s life, but also provide a volume of lasting memories for all hereafter to experience.