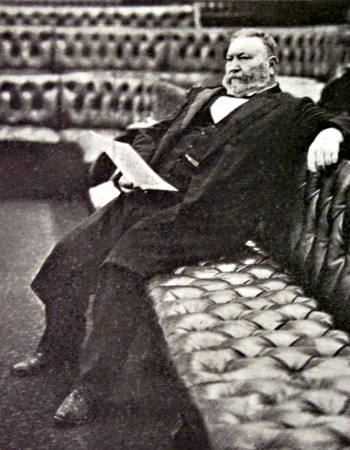 On March 10, 1871 Thomas Bent met with the electors of Brighton at the Gardeners’ Arms Hotel seeking their support for his election to parliament.[1] There he presented his views on a variety of issues including education, Sunday trading and the abolition of road tolls. Bent went on to win the election unseating George Higinbotham by the slender margin of fourteen votes, a success due in part to his manipulation of the electoral rolls.

The following extract is from a report published in the Brighton Southern Cross the day following the meeting at the Gardeners’ Arms.

…Mr McGuinness being voted to the chair, he at once introduced the candidate, who proceeded at once to explain his reasons for coming forward, and said some persons would no doubt think him guilty of presumption in coming forward to oppose a gentleman like Mr. Higinbotham, whose talent and ability he warmly eulogised, stating he considered him to be the greatest politician in the colony, but as far as regarded a knowledge of their local wants he would give way to no man. Rumours were spread abroad that he had been brought out by the squatters, papists, and publicans, but he denied such insinuations. He had come forward as a candidate at the solicitation of many of his neighbours, who had known him for the last twenty years. He had lived amongst them for twenty years, during which time he had filled the offices of collector, auditor, member and two years chairman of their District Board, with credit to himself and satisfaction to his constituents, he had served their interests faithfully, and if they done him the honor to return him he would do so as their representative in the house of assembly.

The first point upon which he was opposed to Mr. Higinbotham, was upon the existing relations with England, that Hon. Gentleman wished to sever our connections with the mother country, but he hoped himself it would be long ere any separation took place. He was opposed to payment of members, he was astonished that the Assembly should abolish State Aid to religion, and then loot the treasury to the extent of £300 per annum each, he considered it to be the worst thing that he happened to the colony

…. He was himself a free trader although in favour of the present tariff. He was opposed to twenty per cent, duties.

…In respect to the Government scheme of education he was strongly opposed to one point, that of the appointment of a Minister for Education. The teachers, if they held their proper position, were possessed of a large amount of influence, which might be turned to bad uses if they were placed under the direction of a tyrannical minister. He believed that a proper board should be appointed with a paid man responsible to Parliament. He though that the State should supply secular education, and that every facility should be given to religious denominations to teach their particular tenets after school hours. He did not believe that a compulsory system of education could be carried out.

... He might tell them there was one great question on which he was opposed to Mr. Higinbotham - he meant the abolition of tolls. That gentleman had opposed their abolition in 1869, when the Local Government Bill was passing through the House. An argument was used that levying tolls was the fairest way of keeping the roads in repair, as the tax fell upon those persons who used them. He controverted this, however, and adduced instances, to show that the tax pressed on different persons very unfairly. In place of tolls he would propose that a tax of 2d. per acre should be placed on all lands, and by this means a far larger sum would be raised.

He was in favour of assisted immigration only so far as it allowed residents in this colony to send for their friends to join them.

… He was strongly opposed to the present market dues as they were virtually a tax upon the produce of fifteen and twenty per cent., and in some instances even more. He was in favour of reforming the present Land Act in such a manner as to throw the land open to selection by bona fide settlers. He was also in favour of amending the Dog act, as he considered that in districts where the population was so scattered every one should be allowed to keep one for protection, for a nominal fee.

…With reference to the Publican’s Bill, he stated he had been informed the Rechabites had been told to vote against him, why, he was at a loss to know, because he had been a total abstainer nearly all his life. He was opposed to the present Act, he believed the Act of 1864 had done more to demoralise the people than any that had been passed. He was in favour of having good houses for hotels and respectably conducted … With regard to Sunday trading, he was strongly opposed to it, and would go as far as any one to stop it, and would close everything on Sunday if it could be done; he however considered bona fide travellers should be provided for, and should be able two get what they required.