Horse racing has played an important role in Melbourne’s cultural and sporting life since the 1830's and as a consequence, a plethora of race courses sprung up in the metropolis. While little trace of these courses exist today, racecourses were situated in the suburbs of Northcote, Richmond, Box Hill, Mentone, Mordialloc, Williamstown, Brighton, Camberwell, South Melbourne, Elsternwick and Aspendale.

The quiet Melbourne suburb of Aspendale holds a special place in the early racing history of Victoria. The suburb was named by one of the first race track owners of the district, James Robert Crooke, whose father Elijah Crook (note the spelling change) purchased the land from Peter Carroll in the late 1870s. Some time later his eldest son James Robert fulfilled his dream and established a racecourse and pleasure ground on the outskirts of Melbourne and named the course Aspendale after one of his finest horses, Aspen, who had won two Newmarket Handicaps.[1] James Crooke was a successful trainer: another of his well known horses, Saladin, won the Australian Cup at Flemington in 1872, the race was won by four lengths and in a time of 2 minutes and 12 seconds. This was after two dead heats with another horse the Flying Dutchman.[2] The gardens were designed by William Guilfoyle, the director of the Botanical Gardens in Melbourne, who has been described as ‘a landscape architect of genius’.[3]

In establishing the racecourse, Crooke sought the assistance of two leading jockeys, Mick O’Brien and Bob Ramage, both of whom had ridden Carbine (‘possibly the greatest horse to grace the Australasian turf’) to success in the 1889 and 1890 Melbourne Cup respectively.[4] O’Brien and Ramage had both ridden with success at Mentone. 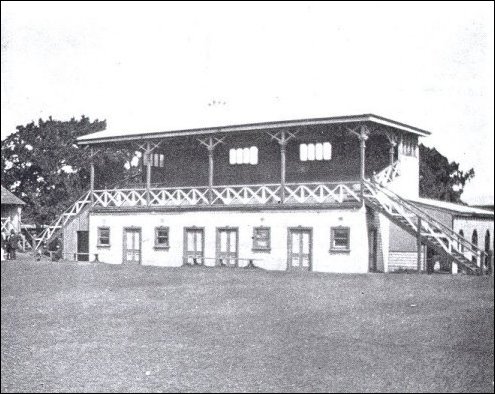 Situated to the east of the present railway station, the gardens designed by Guilfoyle enhanced the race track which was pear shaped. The track was laid down with buffalo grass which was suitable for racing and was one mile and eight furlongs long with a slight sloop to the rails. The enclosure at the course offered the patrons shade and comfort. The course was close to the Mordialloc-Frankston railway line and as such was approximately seventeen miles from the centre of Melbourne. At first the horses were off loaded from the train at Mordialloc and travelled the extra distance to the course by horse float.

Although Aspendale was considered to be a country track, it was allotted twelve race meetings per year by the V R C. This was the same number of meetings held at Mentone and Epsom at Mordialloc.

Aspendale Racecourse was opened on 14 April 1891. It appears that there was no gala opening at the Inaugural Meeting. There were five races held on that day and the track was reported to be ‘good’. There was no special ‘Cup’ race at the first meeting, however, the last race of the day, the Aspendale Park Handicap, had a prize value of 100 sovereigns for the winner and 10 sovereigns for second place. Mr S.G.Cook’s bay gelding, The Commodore, ridden by W.O’Neill won and Mr H Wood’s bay filly, Conceit, ridden by R.Finnigan was second with third place filled by Mr J.Heryet’s grey gelding, Little Shamrock, ridden by J.Flood.[5]

By the turn of the century James Crooke had, at much personal expense, made Aspendale Park available to the public as a summer picnic locality. A report in the local newspaper in 1901 suggested that it had attracted a following of vendors of fruit, ice-cream and other refreshments; also that the vendors who ‘take up their stand[s] at the entrance gate to the park’ should be challenged by the Council for unfair trading practices.[6] Many school children travelled long distances with their escorts to Aspendale Park, trainers conveying them to their destination. In March 1906, the Moorabbin News reported that a group of students from Fitzroy had enjoyed a picnic in the park.[7]

James Crooke was not only interested in horse racing. He was also a motor car enthusiast. In 1904, the Royal Automobile Club of Victoria, the RACV, staged its first car rally at Aspendale Park. This was the beginning of many car rallies at the park.[8] On 28 October 1905, there was a report in the Moorabbin News that ‘the steam roller was at work on the motor cycle track on Mr Crooke’s prettily situated and popular race course. The path is in excellent condition and the motorists should be able to put [in] some fast [times].[9]

In July 1931, the Aspendale Racecourse held its last meeting. The last record in the Turf Register of horse racing at Aspendale Park is registered as Wednesday 29 July 1931. It is interesting to note that the racecourse at Aspendale was opened in the Depression of 1893 and that it closed for horse racing in the 1930's Depression. Although times were difficult in the 1930's there was strong opposition to the closure from the Aspendale Racing and Coursing Club Ltd as well as many trainers who argued that the course should not be closed. The racing club deputation led by the chairman Mr Shillabeer met with the V R C Chief Secretary Dr Argyle to protest the proposal of closure.[10]

After the course was closed for racing Mr Crooke allowed only one trainer to use the track privately for training his horses and that was Mr Louis Robertson from Mordialloc. He trained his horses at the course until the late 1940s.[11]

Motor car racing continued at Aspendale Park until the late 1940's. James retired to Narbethong in country Victoria in 1911. He was the Shire President of Healesville from 1914-1918. However, James Crooke’s name was still recorded as controlling Aspendale Park in 1931.