A Racing Establishment at Braeside

Thomas Keys died in 1891 leaving 458 acres on Lower Dandenong Road to two of his sons, Robert Charles Keys and James William Keys. At the time the property, known as ‘Braeside’, included a four roomed brick cottage and several outbuildings.[1] It was there that Robert and Charles lived with their half sister, Sarah, who kept house for them. After nineteen years they sold the property to Dr Arthur Syme a physician and surgeon of Lilydale and left to pursue farming interests in other places in Victoria. [2]

It was on this land on Lower Dandenong Road, together with some further adjacent purchases, that Arthur Syme established a team of racing horses, built a fine stable and quarters for his employees and constructed both a sand and grass track on which the horses could be trained.[3] Adam Skirving was employed as his trainer and manager of the 930 acre property.

Hibbins reports that Adam Skirving, a successful trainer, had an excellent reputation for his treatment of horses and the people that worked at Braeside. He was considered to be “firm but kindly”. Skirving lived in the Keys house, for the boys there was a cottage, a bungalow for the foreman, a bunkhouse for other employees, a shower house, stables for hunt and draught horses and outbuildings to house buggies and implements. The garden surrounding the house was immaculate with roses and marguerites while the training tracks were distinguished by their white painted rails. [4]

Syme sold the property to the Metropolitan Board of Works in 1928 moving his training establishment to Orleigh Park in Dandenong.[5] The Board wanted this land, together with the adjacent property owned by the Werrett family to construct a sewerage treatment plant to serve the southern and eastern suburbs of a growing metropolis. Before the construction could commence the Depression of the 1930’s intervened forcing the shelving of its plans. The land was then offered for lease by the new owners. Frederick Werrett took the opportunity to take up the land he formerly owned to continue his market gardening activities of growing potatoes, onions and other crops. The land and improvements made by Syme was leased in 1929 to Harry Telford a trainer from New South Wales.

Harry Telford, paid £800 a year for the use of the stables and tracks first constructed by Arthur Syme. He employed twenty five people as gardeners, farmhands, stable boys and apprentices. [6]

Telford is remembered as the trainer of the 1930 Melbourne Cup winner, Phar Lap. At least for a short time this legend of the Australian turf was stabled at Braeside. Cautiously commenting on the career of the great thoroughbred, Shirley Morgan, who lived on the property in the 1940’s said, “Phar Lap was actually trained at Braeside, at least for a short time, and I believe he was stabled in box 20. There was something funny happening before the running of the Melbourne Cup. The horse was taken from Braeside to Geelong because there was a scare that someone was going to nobble him or do something to ruin his chances of being awarded the cup.” [7] 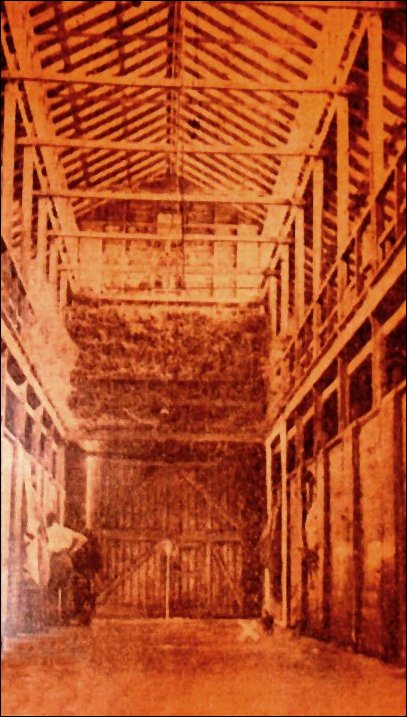 After the great Melbourne Cup victory the great chestnut was taken to United States of America to compete and it was there that he died. The Sporting Globe reported his death and the impact it had on the people at Braeside. “ It casted a gloom over ‘Braeside’ which has not yet been dispelled. The loss is irreparable. The whole staff, from Telford down to the newest ‘strapper’ is affected. The visitor has the feeling that it would be necessary only for one to give way to tears to set the whole place weeping in sympathy. Men as a rule don’t weep but Harry Telford was not many removes from it on Sunday as he hung over a rail fence and talked of the fairy horse that he brought riches to his poor home. … The tragedy has been a terrific blow to him (Telford) Listlessly, he wanders round the place - into the huge stables, out again into the exercise yard and down on to the track, following a phantom or, perhaps, listening for some spirit voice that will tell him Phar Lap is not dead.” [8]

In 1940 Ernest John Willmott followed Telford in leasing part of the property to continue his training activities previously carried out from 33 Patty Street, Mentone. He moved with his family to the house on the property which consisted of the original four roomed brick cottage built by the Keys family plus extensions. Shirley Morgan as a nine year old girl remembers when her father and other members of the family moved to the new location. “My mother had to scrub all the floors and pull out all the nails before the linoleum and carpet squares could be laid. Extra furniture was bought to fill the eleven rooms. At the front of the house there was a lounge and several bedrooms. Down the passage there was a gallery which lead to a bathroom with a chip heater. There was also a small room off the gallery where we stored the horse rugs. It was also from the gallery you reached the very large kitchen and breakfast room Between the breakfast room and the kitchen was an enormous pantry where bags of sugar and flour were stored.” [9] 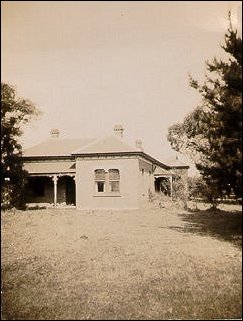 “The kitchen had a very large wood stove with two ovens and heating drawers on the bottom. We put in an electric stove as well. The breakfast room had a open fire place and a table that would sit twenty four people. Both the kitchen and breakfast room were lined with Canadian cedar. It was stained a bit darker than yellow, like a well cooked biscuit. The back of the house was made from wood but the front four rooms, the bedrooms and lounge were constructed from brick.”

“The property had a magnificent stable. There were twenty horse boxes in it, two feed rooms and two tack rooms. There was a loft which made the ceiling of the horse boxes. All the horse boxes had sliding doors and were in excellent repair. The whole stable was Canadian cedar, it was a magnificent structure. When we first went there my father had to scrub it from top to bottom with a sort of antiseptic stuff because they had been shearing sheep in it.”

Speaking of the horse stalls, Shirley said, “Each stall was limed and the straw would then be put in. The lime was to kill any germs that were lurking there. The horses would also have rock salt all the time. Each horse had its own bucket. You wouldn’t give it to any other horse because if one got a cold it could spread. It was very hygienic.”

“The horses weren’t put out in the paddocks very often. Occasionally they went out for an hour. It depended on the horse and the stage it had reached in its training. Horses were exercised after lunch for half an hour. Each boy had to exercise his horses. We built yards in front of the stables. They would go there. They wouldn’t put any of the colts out there but they would put some of the geldings . Some of the horses were in the paddocks after lunch for a pick. The boys would walk the horses around where they’d pick the grass before they were fed at night.

“Outside the stables there was a very large structure with four water tanks on it. If you climbed to the top you could see all over Mentone. Near these tanks was an underground tank and there was a small room which the foreman used to use. There was also another room just past the tank with a verandah where the boys slept. There were several other buildings including a shed where two cows were milked and another with a concrete floor where the horses were hosed down.

“In the front of the house were a lot of old fruit trees. There were almond, fig and pear trees. Around the property there were lots of old gum trees and lots of wild flowers like egg and bacon, sarsaparilla a small blue flower, and small orchids. There was loads of bracken and heather. When we first went there my father cleared all the scrub from the middle of the track.

“The property was about 150 acres and had two training tracks; one was grass and the other sand. There was a shoot out at one end where you could start the horses for track work. …We used to have track work on a Sunday morning. It was a big morning because all the owners would come down to see their horses working. The jockeys Purtell , Sandy Martin, Reg Heather and Cockeyed Morris would be there as well as apprentices. One Sunday Maureen Connolly, ‘Little Mo’ the American tennis player came down with Harry Hopman the Australian coach to ride. Harry Hopman was a friend of Dad’s.” 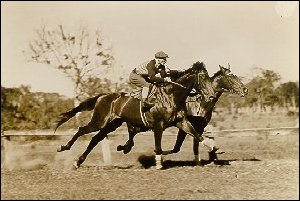 “In the middle of the track there was a round rolling shed containing sand where the horses could roll after working and a dam. We would go fishing there for eels which we would cook on the top of the wood stove. In the duck season we would get wild ducks on the dam. Dad would sneak down after half past five or six o’clock in the morning to get a duck.”

Ernest Willmot used to keep cattle on the property and Shirley kept a herd of goats. Shirley explained that she was the secretary of the Young Farmers Club at Dingley Primary School when she won a nanny goat. When a family friend came down from Swan Hill he bought her a billy goat in the boot of his car. “From then on I ended up with a herd of fifty two goats. Later the goats were sold and shipped to the “Uncrowned King of Fiji” as they called him. He had gold mines in Fiji. I don’t know if they ate them over there but we used to and they were quite nice.” 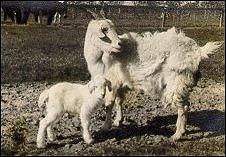 When the MMBW wanted to expand their operation at Braeside and resume some of the land taken up by the training track the Willmotts moved their business to a location on Boundary Road, opposite Epsom Race Course in Mordialloc. No one replaced them in the Braeside house which was eventually demolished and the magnificent stables built by Syme were consumed by fire in 1982. 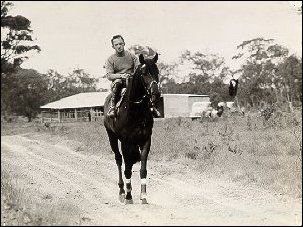 Cockeyed Morris on Bootle at Braeside, owned by Liston and trained by Willmott. Courtesy Shirley Morgan.