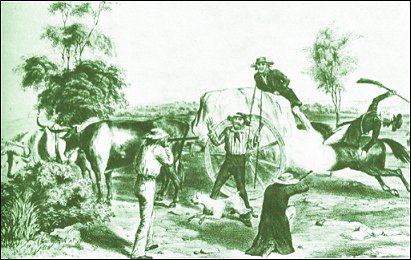 The medical attendant said Robert Howe didn’t have long to live. He suggested that it was time to call the magistrate so Robert could make a statement. Robert Howe was lying in the Melbourne Hospital after receiving a gunshot wound to the arm and breast. The date was September 27, 1853

In his deposition to the magistrate Robert Howe described how he came to be wounded. “On last Friday morning, about eleven o’clock, a man came down to where I was in a paddock at Brighton. He came in company with Mr King’s eldest son. He had a double-barrelled gun in his hand. Mr King carried a saddle and bridle with him. He said to me that he was a constable, and he came to see for some sailors. I said there were no sailors there. He then said ‘Come be quick, and take those horses out.’ I said, ‘Stop till dinner time’. He fired at me. I fell; and said ‘My God, what have you shot me for!’ He said ‘You’re one less.’ I then staggered down the paddock. There was no other gun on the paddock but the one he had in his hands. I saw the gun in his hands after he fired. I would swear that he fired at me, and that he fired with the intention to kill me. He then got on one of the horses and rode away.” [1] Robert Howe made this statement knowing that he had no hope of recovering.

Although Howe’s statement to the magistrate suggests the involvement of only one criminal ruffian, other information indicates there were in fact two people, Henry Bradley who fired the shot, and his companion Patrick O’Connor. Bradley had been transported to Van Dieman’s Land after being charged with pick pocketing in London. [2] O’Connor told some sailors that he originally arrived in Adelaide a free immigrant but was subsequently convicted of a felonious offence and transported to Van Dieman’s Land to be incarcerated on Norfolk Island, the notorious prison settlement. [3] It was there that he met up with Bradley.

Bradley was 23 years old, five feet five inches tall, with a fair complexion, long curly brown hair, but no whiskers. His face was thin with a nose described as having “peculiarly large nostrils’. O’Connor was seven years older and slightly taller. He was five feet seven inches in height, with a fair complexion but unlike Bradley his hair was red and he wore whiskers and moustache. One of his front teeth was missing and he had a scar down his nose. [4]

After leaving Norfolk Island, or ‘Ocean Hell’ as some writers referred it to, they worked as ‘ticket of leave men’ on separate farming properties near Launceston. The Argus, reprinting details originally published in the Launceston Examiner, noted that both were receiving high wages and, without cause, left their employment and proceeded to raid and pillage workers’ huts and farmers’ residences as they moved towards Circular Head on the north coast. [5] They visited a hut owned by Jonathan House where they acquired a double barrelled gun before moving to the residence of John Sparks. There they tied up the whole family and confiscated a second double-barrelled gun.

After visiting another farm they went to the residence of Jonathan House with the intention, it was claimed by the Argus reporter, of killing him and stealing a large sum of money. Unfortunately for them, Jonathan House did not keep large sums of money in his home so all the marauders gained was five shillings. Mr House escaped but a relative, Alfred Phillip, was not so lucky. O’Connor discharged both barrels of his gun into Phillip’s neck, killing him instantly in the presence of Jonathan House’s daughters.

Before arriving at Circular Head on the north coast of Van Dieman’s Land they called in at several properties, ordering breakfast at one and stealing a gun and provisions from another. It was during this journey that they shot a constable through the arm but he managed to escape into the scrub with a companion and avoided further injury. [6]

At Circular Head on September 15, 1853 they inveigled their way aboard a small trader Sophia anchored in the River Inglis and forced the captain with his crew to sail for Port Phillip. Later the captain was accused of cowardice by the Mayor of Melbourne, a member of the bench at the Police Court trying Captain Bawdy for bringing felons into the colony. “Well Captain Bawdy you have been guilty of a most cowardly transaction that ever I heard of. That nine seamen should allow two scoundrels to act in this way is almost past belief. Why it is a disgrace to the British navy.” [7] James Jarvie, the mate of the schooner Sophia, wrote of the tense situation aboard the vessel and of the threats made by Bradley and O’Connor to the captain and crew [8] Nevertheless, Howitt in his comments on the events wrote, “That this number of people should allow two fellows, one only armed with a double barrelled gun, and the other with a rifle, to tie them up and keep them in subjection from Thursday at noon till the following Monday, is one of the most extraordinary things in the whole history of rogues and dastards.” [9]

On Monday September 19, 1853, after reaching the coast of mainland Australia, Bradley and O’Connor, in the company of two sailors who were forced to join them, landed near Cape Schanck. Later the villains and the sailors parted company with Bradley and O’Connor moving in a northerly direction, visiting several stations where they used concocted stories in order to obtain provisions. On the way the pair visited the house of Mr Balcombe where they ‘plundered but shed no blood’. [10]

It was at the property of John King that blood was again spilled with the shooting of Robert Howe. On September 23, 1853, arriving at the two hundred and thirty seven acre King property ‘near Brighton’ Bradley and O’Connor entered the house, tied up the owner and his son, and “then proceeded to rifle the place of every article of value, and rigging themselves out in two suits of Mr King’s clothing went about their business.”[11] Seeking horses, they went with King’s eldest son to the paddock where Howe was ploughing. When Howe was instructed to unharness the animals he thought they were joking and told them they should wait until dinner time. The result was a shot which ultimately caused his death despite the attention of Drs Barker, Grieves and Wilmot, who several days later, performed the traumatic operation to amputate Howe’s injured arm. [12] 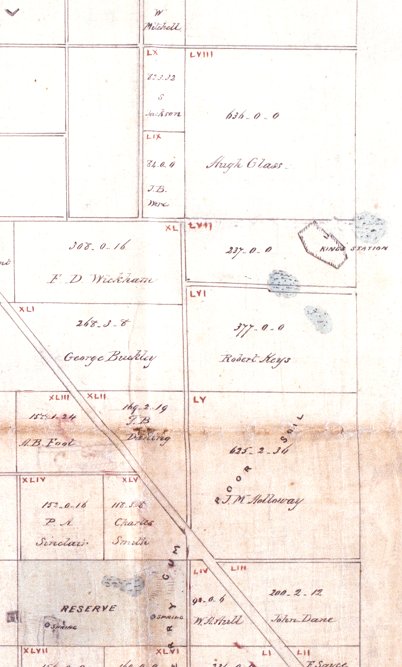 Leaving a bleeding Howe, Bradley and O’Connor mounted two bay horses, “one particularly large, and the other of a moderate size,” and proceeded in the direction of Prahran and South Richmond. [13] The news of their escapades caused the Colonial Secretary’s Office to offer a reward of two hundred pounds for their apprehension. [14] Since what was described in the Argus as the assassins’ attack on the unfortunate man at Brighton the “whole police force of the city, the detectives as well as the mounted troopers, have been indefatigable in their endeavours to bring to justice these daring and hardened Vandemonians.” [15]

Five troopers received information that matched the description of the bushrangers. But they were unsuccessful in locating them. The next morning the troopers reached Gisborne where Charles Nicholson and Cadet Thompson joined their party. The group continued their search travelling to Carlsruhe and Five Mile Creek but again without success. Riding to Cain’s station at Kilmore, they found eleven men had been tied up by the two bushrangers who had spent the night in a shepherd’s hut. As the eleven men were being released one spied Bradley and O’Connor thirty feet away. With his alarm, shots were exchanged, one hitting Cadet Thompson in the left breast, the ball passing through his body and coming out under the shoulder at his back to lodge in the wall behind him. Bradley and O’Connor made off. Trooper Ostler called to his comrades, “Let us take the devils.” Unfortunately the troopers’ horses had broken away so they were not able to continue the pursuit. [16]

Collecting fresh mounts from Mr Cain’s property, Sergeant Nolan, three constables, Dr Pearce and Trooper Ostler went to investigate the report that two men had robbed a tent and taken all the provisions they could find. Shortly after they came across four men, two of whom turned out to be the wanted bushrangers. Bradley and O’Connor turned and fired, with their bullets taking the skin off Mr Nicholson’s cheek and wounding his horse in the neck. The pursuing party returned fire but without effect. In the ensuring melee O’Connor was struck with a sword but he was able to parry the blow with his gun before falling to the ground and ultimately being secured by Constable Nicholson. Bradley resisted with determination until Trooper Ostler threatened to blow his brains out unless he surrendered. [17]

Escorted to Melbourne, Bradley and O’Connor were brought before Justice Williams of the Supreme Court of Victoria, charged with feloniously shooting at the cadet Edward Thompson with the intention to murder. Two witnesses, John Hardy a shepherd employed by Mr Cain, and Charles Nicholson, a mounted constable recounted the events surrounding the shooting of Cadet Edward Thompson. Nicholson said, “I saw Thompson running out and telling O’Connor to put his pistol down. O’Connor fired. I saw Thompson put his hands to his face and say, ‘O My God I am Shot’.” [18]

Neither Bradley nor O’Connor had lawyers assisting them in their defence and they did not always ask questions of the witnesses presented by the Attorney General. However, they did challenge Nicholson’s statements, accusing him of telling lies. Nicholson responded by saying he had no doubt about O’Connor’s identity.

When addressing the jury towards the conclusion of the trial, O’Connor did not deny his involvement in the shooting of Nicholson, but claimed only two shots were fired that night and at that time Bradley was not within a quarter of a mile. Therefore he could not see how Bradley was involved in the matter as he would not have known who was firing at whom. Accepting the possibility that he might be declared guilty he claimed Bradley was innocent. Bradley did not take the opportunity to speak to the jury, seeing no benefit to be gained from such an action. Why O’Connor took that stance on behalf of his partner in crime is not discussed in newspaper or court reports.

After Justice Williams addressed the jury, pointing out that O’Connor did not deny his guilt, and also stated that if they believed Bradley aided and abetted O’Connor in his crime then Bradley was equally guilty. The jury’s decision was swift, concluding both prisoners were guilty.. In sentencing them to death by hanging, Justice Williams reflected that there was not the slightest hope of mercy for either of them and that he could only entreat them “to amend their conduct during the very short time they would pass in this world.” [19] Bradley’s comment was, “Thank you my lord. I am very glad of the sentence.”

An Argus reporter noted that both prisoners were young men with low receding foreheads. He thought Bradley, who during the trial was frequently looking around the court and laughing, exhibited an air of bravado. “He has a cunning look, and not very prepossessing features.” he reported. Yet he observed nothing improper in O’Connor’s behaviour. Both were hanged on October 24, 1853 at the Old Melbourne Goal. Later a coroner’s report noted, “Examination of their skulls after execution proved that they were not responsible for their actions.”[20] 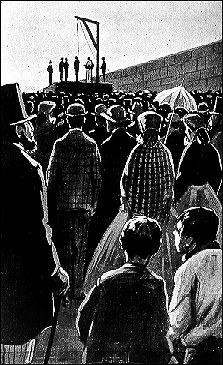