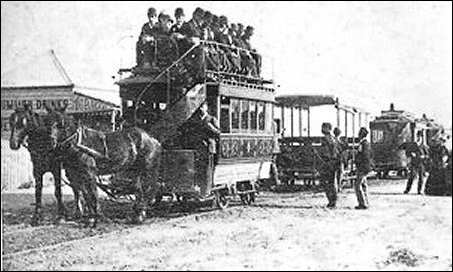 In 1886 individuals named as major shareholders in the Articles of Association for the Beaumaris Tramway Company were Charles Henry James, David Munro, George Sutton, John Hamilton, George Thomas Landridge, Robert Malton and Harold Sparks. At that time James had one thousand shares, Malton five hundred and each of the other members three hundred. By 1913 when the company was in great financial difficulty many of these people had surrendered their financial interest. James died in 1898, as a discharged bankrupt but his family still held 140 shares in 1913. Munro, Landridge, Malton and Sparks were no longer associated with the company while both Sutton and Hamilton retained their original holdings.

The number of individual shareholders had greatly reduced by 1913. The names Kingston, Nicholson, Butten, Taylor, Everingham, Hammond, Robertson, Kennedy and Cornell, all originally holding one hundred or more shares no longer appeared on the company register. Few people increased their investment in the company over the twenty seven year period from 1886 to 1913 but amongst those who did were Elizabeth Bent, a spinster of Brighton, John Ferguson a gentleman of Melbourne, W Bage a surveyor, Fred Pleasance an auctioneer of Melbourne and Jane Wastell of Cheltenham. By 1913 the largest number of shares were held by the Beaumaris Park Company.

The following table lists the shareholders as at January 1913, their address and occupation as well as noting the number of shares owned.