Kingston, hardly a gem of a name: Where did it originate?

The municipality called Kingston was created in 1994 as a result of the initiative of the State Government to reorganise local government boundaries. At the time a local paper reporting the council amalgamations headlined an article ‘Kingston - hardly a gem of a name’ went on to quote the reactions of local politicians and mayors. [1] Geoff Leigh disliked it, Mal Sandon was disappointed, Stephen Buckingham thought it reasonable, but unimaginative, and David Lean wasn’t fussed. 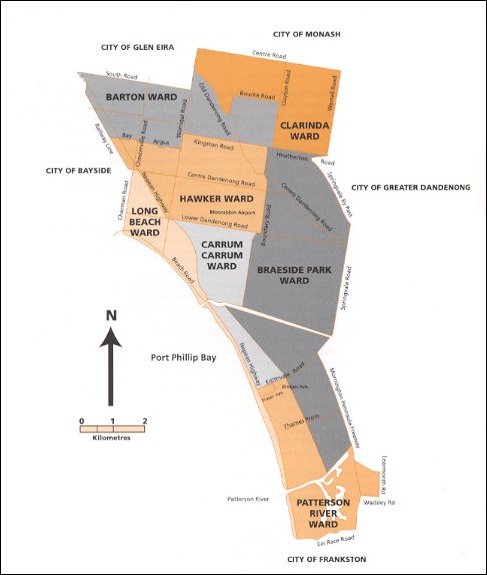 Map of Municipality of Kingston.

Mal Sandon, the member of parliament representing Carrum, believed the name would mean nothing to the people in the Chelsea community and they would fail to identify with it. He thought a name associated with the bay, wetlands, or a famous Victorian or Australian, would have been more appropriate. Geoff Leigh, the member for Mordialloc, linked the name to the Kingston Centre, the geriatric institution on the corner of Warrigal and Kingston roads.

What is the history of the name ‘Kingston’, and how appropriate is it for this municipality? Firstly, Kingston Centre itself has origins elsewhere in Melbourne. Originally called the Victorian Benevolent Asylum, it was first established on its North Melbourne site in 1850 to care for the aged and disadvantaged, but it was transferred to a new site on the corner of Kingston and Warrigal roads on March 27, 1911 where a two storey building was constructed. The Governor of Victoria, Sir Thomas Gibson-Carmichael, laid the foundation stone on March 31, 1909. 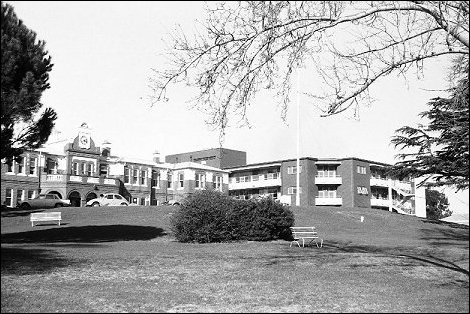 The Kingston Centre with the original building to the left, 1973. Courtesy Eric Longmuir.

Since its establishment at Cheltenham the name of the institution changed several times. It brought its first name, Melbourne Benevolent Asylum from North Melbourne but in 1924 its name was changed to Melbourne Benevolent Asylum & Hospital for the Aged and Infirm to more accurately reflect its role. Another change occurred in 1949 when the words asylum and infirm were dropped from the title creating the name, Melbourne Home & Hospital for the Aged. In 1965 the word Melbourne was changed to Cheltenham to match its geographic location and in 1970 a major name change was implemented when it became the Kingston Centre. [2] Consequently it is clear the name ‘Kingston’ did not originate with this particular facility.

One view expressed by some members of the community was that the name of the new municipality referred to a district pioneering family. [3] It was in 1876 that the Kingston family moved from Collingwood to one hundred acres on Centre Dandenong Road, a property probably purchased with profits from a successful cartage business conducted around Melbourne and involving trips to the gold fields during the gold rush period. Later John Kingston added twenty acres to his original purchase where he worked as a market gardener. Eventually he took up large land holdings in Langwarrin. [4]

Memorial on the Kingston family grave in the Cheltenham Pioneer Cemetery.

But there is another, and more likely, explanation of the4 ‘Kingston’ name and the Local Government Board seems to have arrived this appropriate name by accident. The initiative of the government to amalgamate a portion of the City of Moorabbin, most of the City of Mordialloc, the City of Chelsea and small sections of the cities of Springvale and Oakleigh to form the new municipality called Kingston, was based on the Local Government Board’s recommendations. The Board was reported as saying the word Kingston had a ‘regal touch’ as it was an old English one with the meaning ‘royal stone’. [5] The Board’s justification for its selection of name was the fact that Kingston Road traversed the proposed city. Mal Sandon’s response was that the Board should have thought of ‘something more pleasant than a road’ to name the City after. But did he or the Board consider why the road was named in that fashion? Is there something behind the name? Perhaps the answer lies with the King brothers, initially leaseholders of a squatter’s run surrendered by John O’Shanassy.

Much of the area covered by Kingston was in the early days of European settlement a part of John O’Shanassy’s run called Windert. The lease consisted of 40,000 acres stretching from Boundary, Chesterville and Nepean roads, east and south as far as Dandenong and Mordialloc creeks. Failing to make a success as a cattleman O’Shanassy surrendered his squatter’s licence in 1846 and worked as a businessman in Melbourne. (Later he had a very successful political career in the Victorian parliament serving as Premier on three separate occasions.) With O’Shanassy’s departure the King brothers, Richard and John, took up part of his leasehold.

While holding significantly less land than O’Shanassy, the King brothers nevertheless had thousands of acres which they referred to as Kingsland, even though the name was not recognised by the government. Lands to the north east and east of their lease were later called Queenstown and Kingstown and records as old as 1854 show the use of the name Kingston to identify the area covering Heatherton and Dingley. [6]

With the 1850 separation of the Port Phillip Bay District from the colonial administration of New South Wales and the establishment of the Colony of Victoria a process of reorganising land ownership and occupancy began. John King, along with other leaseholders, had to surrender his leased land but gained some hundreds of acres through what was called pre-emptive right. This right allowed any holder of land to select and purchase up to 320 acres. The Kings had their homestead on land stretching from the corner of what today are Warrigal and South roads, south towards Keys Road and west to Chesterville Road in Moorabbin. 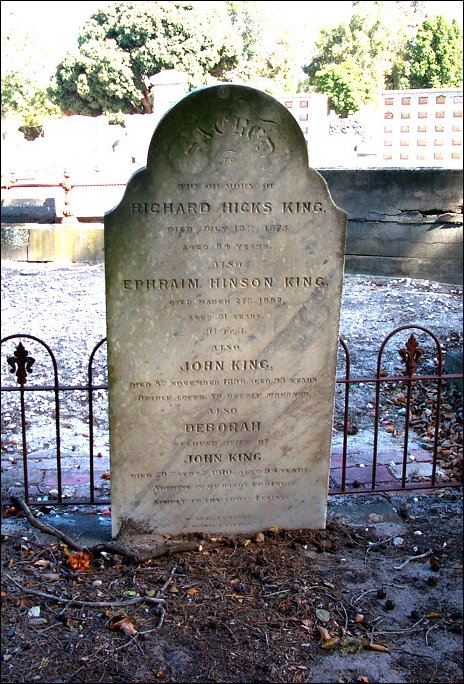 Headstone on the King family grave at the Cheltenham Pioneer Cemetery.

In 1876 Thomas Attenborough, with a committee of local men, sought a grant from the Board of Education to erect a school in Old Dandenong Road to be called the Kingston Common School. Subsequently a wooden building was erected and given the name Kingston. [7] Later this name was changed to Heatherton because Kingstown or Kingston was a title already in use at a postal address in Western Victoria. It was Mrs Hotton, the local postmistress, and the wife of the head teacher of the school, who suggested the title Heatherton because there was an abundance of heath growing in the area. . [8]

While Sandon is correct in implying the name Kingston did not have a strong connection with the southern portion of the new city this is not the case with a substantial area towards the geographic centre of the municipality. There the word Kingston or Kingstown was used for many years to name a locality, two pioneering families were associated with it, and a large institution chose to be established there and much later take the name Kingston. These facts when taken together, plus the ‘regal origin’ of the name, suggest the choice of the Local Government Board was appropriate. It should be noted that although some of the new municipalities negotiated a change of name, Kingston did not. [9]