The Story of the Fountain: Boer War Memorial 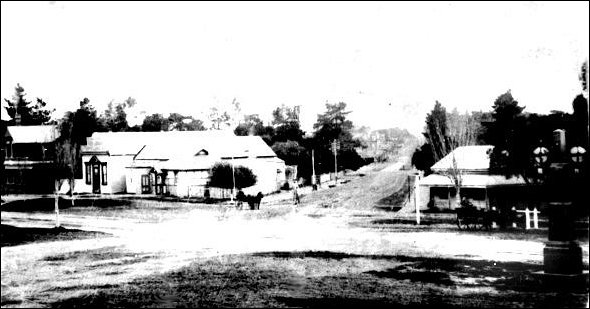 It was Alfred Caffin, the vicar of St Matthew’s Church of England in Cheltenham, who first proposed a memorial to the Moorabbin boys who served the Empire in South Africa fighting the Boers. He suggested a fountain and offered to subscribe ‘the widow’s mite’ towards the cost. [1]

JM in a letter published in the Moorabbin News echoed the suggestion of Caffin proposing that the water fountain be erected on the triangular piece of land adjoining the Cheltenham Mechanics’ Institute and suggested a public meeting should be called to advance the project. [2] An alternative suggestion of a band rotunda erected on the same piece of land was rejected. [3]

The News reported in May the following year that an important meeting had taken place in the Mechanics’ Institute where the memorial committee was enlarged to fifteen members with Cr Penny being elected chairman and Mr Merriman, the station master at Cheltenham, secretary. [4] Donation collectors were appointed for East Brighton (Rev D Hewton and Mr W G Burgess), South Brighton (Messrs Daff, Reynolds, and Staynor), Cheltenham (Rev A Caffin and Messrs Penny, Rippon and Comport), Heatherton (Mr R Mills), Mentone (Mr Scudds), Beaumaris and Black Rock (Mr Lamb Smith), Sandringham (Mr Storey). Circulars were also distributed to school children urging them to assist with the movement. [5] The aim was to have sufficient money to unveil the foundations of the memorial on the day of King Edward VII’s coronation June 26,1902, a goal that proved to be too ambitious.

J Merriman, using the pages of the News to solicit the support from the residents of the Shire of Moorabbin for the memorial fund wrote, “The object is to raise sufficient funds to erect a drinking fountain to commemorate the deeds of our soldiers during the Boer War in South Africa. It is in our day and generation that such heroic deeds have been effected, and whilst we rejoice at the success of the British arms we feel that as Australians it has been our privilege to send to the front men from the Moorabbin district whose conduct and soldierly manner have won the highest praise and admiration of the British Generals.” [6] He suggested the cost of the memorial would be £100 and as there were not one hundred men in the district prepared to donate one pound each it was necessary to approach the public. He reminded his readers that the names of all the Moorabbin soldiers were to be cut into the granite slabs and on one side the names of those who gave their lives were to be inscribed.

During the next month, on June 14, 1902, Merriman again was appealing for financial contributions to the fund reminding fellow citizens that when hostilities commenced with the Boers they contributed handsomely with gifts of coin, merchandise and eloquence to the departing troops, and went on to write, “It still behoves us to demonstrate such loyalty by erecting a lasting memorial, that in history it shall be recorded, and in our district that these men honoured us and we honoured them.” He concluded his letter with the challenge, “Let Moorabbin Shire’s memorial be one that our children and children’s children shall look upon and inspire them to deeds of valor in defence of their country and nations of which we form part.” [7]

The community was slow to respond to Merriman’s challenge. More than twelve months later , on August 1, 1903, he warned the public that the committee had insufficient funds to construct a monument worthy of the shire and that serious modifications to the original design would be necessary if additional money was not subscribed. [8] Edwin Penny, a shire councillor and chairman of the memorial fund committee, indicated to Council that when completed the fountain would be their responsibility and that it was regretted that the lower step would have to be dispensed with due to the lack of funds. [9]

Cr Storey, believing it was a pity to spoil the fountain for the sake of £5, moved at a Council meeting with the support of Cr Scudds of Mentone that they should provide the extra step. Cr LePage was not so generous as he was unhappy about the way the committee had conducted itself. He pointed out that the committee had made use of the Council’s day men to excavate the site, took metal that was required for road construction, and dumped it on the roadside causing an obstruction that necessitated the use of a council warning light. Moreover the design of the fountain included two lamps which would cost the Shire £12 and the water used would cost 1/- per 1000 gallons. In his view the Shire money should not be spent ‘in such a manner’ and he would oppose it to the finish. 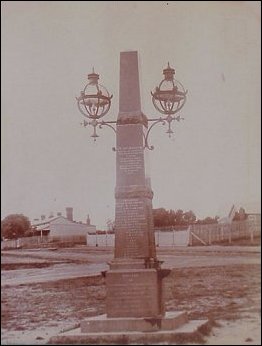 Cr Penny responded to Cr LePage’s statement pointing out that the men wanted clay for another project so in his view it was sensible for them to take it from the excavation, and as the metal was being carted past the place he did not consider it any harm to take what was required. He also thought the cost of the lamps suggested by Cr LePage was an exaggeration as the cost was more likely to be £10.

Cr LePage took exception to Cr Penny’s suggestion that he was exaggerating the cost and gained support in his opposition to the project from other councillors who failed to commit themselves to providing the additional funds to save the second step. The discussion was concluded when Cr Storey withdrew his motion indicating he would put it forward at the next meeting of council. [10] At the subsequent council meeting Cr Storey moved and Cr Small seconded the motion that a contribution of £5 be made to the Memorial Fountain Fund to allow the construction of an additional bluestone course. The motion was carried. [11]

By the end of November 1903 members of the community wondered whether the fountain would ever be finished as by that date only the foundation had been laid and it had been completed four or five months earlier. [12] A correspondent to the Moorabbin News signing himself ‘Ingignant (sic) Subscriber’ pointed out that the foundations had been laid with a ‘great flourish of trumpets’ but that the site was still being protected at night by a lamp, which was “kept religiously burning to remind people of a fiasco”. He believed the men managing the enterprise had bungled the whole affair and appeared to lack the energy to complete the task. [13] “The Man in the Street” put his views in verse:’

The concrete on the hill lies low,
Inglorious, and unblest;
No bubbling waters there doth flow,
The Fountain is non ear
Where are the two Promoters great
Have they levanted from this State

We hoped to hear the beat of the drums
Rejoicings o’er the way’
The cry of “water” – “Here it comes”
Hip-hip, hip-hip, hooray!”
Like poor Ophelia, are they mad?
Or too much water have they had?

Only the plaintive bleat of lamb
Comes from that wind-swept hill’
And down by Bloxidge’s old drain –
By many a Carrum rill
“Too much water have we had,”
Too much bad grammar, yes, by dad!

Oh, let us build a shelter-shed –
An In Memoriam Hall,
Upon the Fountain’s concrete bed,
Where Carrumites may call.
One little coin – a copper one –
A penny-in-the-slot, ‘tis done!

The Fountains of the heavens are open,
Descending from the sky’
The Carrumites are all “stone-broke” –
Their grammar, who’ll deny’
But what of our Promoters two?
How much of mud they’ve waded through!

The lamp still burns upon the hill –
A warning beacon there;
It swingeth on the concrete still –
A jibbet of despair,
It throws at best a murky light –
It is indeed a “Temperance Blight.” [14]

The memorial was completed and Sir Thomas Bent, Premier of Victoria unveiled it on Saturday May 7, 1904 by releasing the Union Jack cover to reveal a fourteen feet tall, Scotch pink polished granite obelisk, rising from a Malmsbury bluestone base. Two ornamental scrollwork arms bearing incandescent gas lamps protruded from near the top of the obelisk while at the base were the taps connected to recently laid municipal mains conveying Yan Yean water. The names of the “Moorabbin Boys” who volunteered to fight in the South African War were inscribed on the sides of the monument. The design and erection of the memorial was the work of Mr Wilson of Surrey Hills. [15]

The total cost of the obelisk was about £120 and at the time of the unveiling the committee was short of the necessary total by £25, which caused Cr Burgess to invite people to contribute 10s to the fund so the debt could be liquidated. He commenced the collection with his own 10s and Crs Mills and Barnett were quick to follow. [16] By the end of the day the money had been raised.

Cr Penny, as chairman of the memorial committee, presided over the event attended by Colonel Kelly, Colonel Otter and Major McKnight, all of whom had served in South Africa, Cr Barnett the Shire President and other councillors, the Reverends Caffin, Cock and Moorhouse, together with Messrs Hugh Brown, J Merriman, Comport and J H Butler. There were also soldiers, accompanied by friends and relatives, who had fought in the campaign. The Moorabbin Brass Band accompanied the singing of the National Anthem before Mr Bent gave his address.

Thomas Bent drew attention to the regard the people of the community and the nation as a whole had for Great Britain, and the opportunity the unveiling event gave people “to shed a tear over those brave men who had fallen, and to congratulate those who had returned.” [17] He went on to apologise to the returning soldiers for the government’s failure to honour promises of future employment made to them before their departure for South Africa. He indicated that he considered it his duty to see that the promises were carried out to the fullest extent, “if he remained in power”, not missing an opportunity to promote his political career. 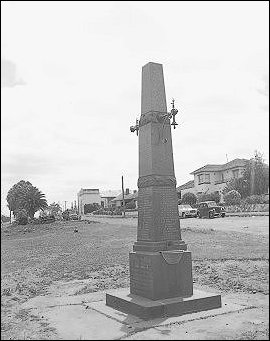 Memorial on its original site on the corner of Point Nepean and Chesterville roads but with vandalised lamps, 1962. Leader Collection.

The names on the memorial totalled 47 in number including people from various locations in the Shire of Moorabbin; Sandringham, Beaumaris, East Brighton (Bentleigh), South Brighton (Moorabbin & Highett), Cheltenham, Mentone, and Mordialloc. Although Cr Penny as Chairman claimed the purpose was to record all members of the community who served in South Africa there were omissions. [18] Why were they excluded when their presence was publicly known through their letters published in local newspapers? At least some of these people were not members of the official contingents leaving Melbourne but proceeded under their own authority to South Africa where they joined units there. John A Foster of Cheltenham joined the Kaffiaria Mounted Rifles, Sergeant J Murphy of Cheltenham enlisted in the Imperial Light Horse, Lieutenant Murray of Sandringham was attached to the Wiltshire Regiment and “Dick’ Adams was with Tullabardine’s Scottish Horse. Other people noted in local newspapers as departing for South Africa were C Judd, Sergeant Allison, and Robert Hovenden of Cheltenham but perhaps they did not enlist for military service while there? [19] 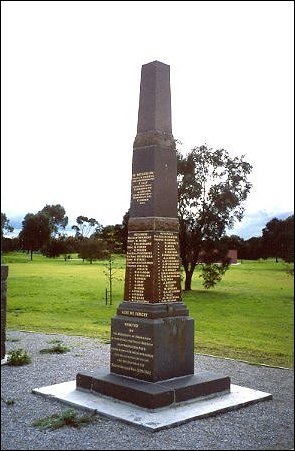 The names etched into the pink granite of the obelisk are presented in alphabetically order in the table below. Where known the unit in which they were members is noted as well as the place of their residence in the Shire of Moorabbin.