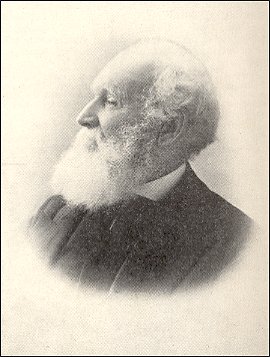 Richard Hale Budd lost his job at age fifty six. He had held the senior position of Inspector General to the Denominational Schools Board but when the administrative arrangements for education in the colony of Victoria were reorganised in 1873 he was not offered a position. This was despite his significant contribution to the education of children and the training of teachers in the colony. He was, however, granted a pension of £500 each year.[1] Although this forced retirement was difficult to accept at the time Budd later acknowledged it was the best thing that could have happened to him for he was able to take up new challenges which involved him in a pioneering role at Mordialloc. [2]

Richard Hale Budd was born at Kensington, England on March 16, 1819, the eldest son of the Rev Henry Budd, rector of White Roothing, Essex. He attended Rugby under the redoubtable Dr Arnold before attending St John’s College, Cambridge, from which he graduated in 1839. While at Cambridge he was a member of the Lady Margaret Boat Club, was awarded a university ‘blue’ for his contribution to rowing, and was a member of several winning crews. On coming to Victoria he continued his interest in rowing and sailed his yacht, Daphne on Port Phillip Bay. [3]

Trained as a teacher in London at the Westminster Training Institute and holding a Master of Arts degree from Cambridge, Richard Budd came to Port Phillip Bay in 1840 on the barque Eagle together with farm implements and several dogs.[4] His intention was to engage in pastoral pursuits. Accompanied by three labourers from his village of White Roothing to act as shepherds, he entered into a partnership with the Pohlman brothers, first at Kyneton, and later at Ivanhoe. At this activity he was not a success. After the loss of his capital he migrated to Van Diemen’s Land in 1843 and established a boys school at Campbelltown. Returning to Victoria in 1846 he continued to teach, opening a school in Victoria Parade. It flourished. Bishop Perry, the first Anglican bishop of Melbourne, recognising Budd’s qualities and success, appointed him as the first headmaster of the Diocesan Grammar School. This school opened in April 11, 1848. [5]

In 1854 he relinquished the school position to accept an appointment with the Denominational Schools Board as an inspector of schools. In this new role he visited schools in the Cheltenham district to assess teachers and to make recommendations to the Board on the educational needs of the district. First as an inspector and later as inspector general, Budd became involved in the clash of views between the Wesleyan and the Church of England communities about the location of a school at Cheltenham and the provision of a teacher’s salary. He endeavoured to get the two parties to form a Church of England schoolroom with a Wesleyan master but Frederick Meeres, the teacher, objected. [6] The Church of England school at the time was located at Spring Grove (now Weatherall Road) Beaumaris, and the Wesleyan school was in La Trobe Street on the Beaumaris Estate. Finally, in his report of March 19, 1855, Budd recommended to the Board that the Cheltenham school was hardly necessary given the presence of a Wesleyan school about two miles in the opposite direction at Moorabbin.

The claims for a new school location did not go away. In 1868 the local inspector was unable to give a clear direction to the Board so the matter was referred to Richard Budd who was appointed Inspector General in 1862. By this time the suggestion was to amalgamate the Cheltenham school in Silver Street with the school in La Trobe Street, the Church of England school in Spring Grove having closed, but this was not favoured by a substantial number of people. Budd then wrote “I have no hesitation in advising the Board not to expend public money in building except on a central site suitable for both populations.” [7] The school was built in Charman Road, on crown land next to the cemetery, with pupils from the La Trobe Street school commencing work at the new location. Funds were withdrawn from the Cheltenham School in Silver Street, ultimately forcing it to close, and the school in Charman Road eventually took up the title Cheltenham .

Richard Budd was an early advocate for the consolidation of schools. He disliked the number of inferior schools in populous districts and wanted to see well organised schools properly housed and taught by ‘first rate teachers’. He believed the only factor which should limit instruction at a public or common school should be the capacities of the pupils. [8] He also expressed the view that students should not be restricted to studying only the prescribed subjects for Matriculation, the entrance requirement for a university education. That he thought was injurious to the student’s future progress. He opposed cramming. He advocated an extended course of reading, and when a student was sufficiently advanced to pass the exam without much extra ordinary preparation, that was the time to sit for the exams. [9]

On December 31, 1872, Richard Budd’s role as Inspector General ceased. A new organisational structure was created by the government to support a system where education was secular, free and compulsory. But there was no role for Budd because he had been critical of the Denominational Board’s conduct and had created some enemies and rivals. His 1863 report to the Board was not published because a person in authority believed it contained details that were not ‘generally interesting’. Yet it dealt with the qualities of a good teacher, classroom facilities, school management, standards in the subjects and methods of inspection. [10] The Reverend Donald McDonald, a Presbyterian clergyman, spoke of Budd’s capacity, vigour, industry and zeal in his work with the Denominational Board, and believed that because of the way Budd had been set aside, inspection of schools and education had suffered. [11]

For a time Budd, with the assistance of two daughters, conducted a school for girls in Russell Street at the Independent Hall. It was so successful that to be ‘one of Mr Budd’s girls’ was quite a recommendation. [12] This work was taken up at the suggestion of some Presbyterian ministers concerned about higher education for girls. Subjects taught at the school included Scripture, Greek, Latin, English, French, History, Geography, Euclid, Algebra, Arithmetic, Needlework, Class Singing, Theory of Music and German. Lectures were also given in Natural Science. The school was closed in 1886 but he continued to receive boarders in his home at Brighton.

It was from Brighton that Richard Budd travelled by horse and carriage to conduct services at St Nicholas’, Church of England at Mordialloc. There were occasions recorded in church records when he did not make the service because his carriage broke down on the road, or was prevented by of extreme wet weather. From January 1873, despite these and other minor inconveniences, he began to take services regularly along with another layman, William Robert Looker.

At times the congregation was small, support was limited, and the collection plate was relatively empty. Nevertheless he persisted. After one service Budd recorded his comment in the church records. “Read prayers. Only the caretaker present and one person brought by me.” On one Sunday in February 1895 Richard Budd had a congregation of 20 but there was no one to hand round the plate and only 9d was received. Budd expressed his feelings by writing in the Remarks column, “Rev 9!!” Again on December 29th of that year when he preached from Zachariah 9:11 - As for thee also, by the blood of thy convenant I have sent forth thy prisoners out of the pit wherein is no water - there were 13 present and “no one to collect”. But there were also very many encouraging days, according to the Rev L W Bull. [13]

Richard Budd conducted his last service on the evening of March 8, 1896 when he was 80 years old. By then he had served the Mordialloc church in a voluntary capacity for twenty three years, preaching and reading the office of Matins or Evensong. He was to live for another thirteen years, dying on March 27, 1909, three weeks after his 93rd birthday. [14] After a service at St Andrew’s church conducted by the Rev E A Crawford he was buried at the Brighton Cemetery.