Back in the late fifteenth century people were forbidden by law from working on a Sunday. During this time massive religious changes occurred in England. Forty three holy days that previously had been celebrated were dropped and a greater emphasis on the sanctity and uniqueness of the Sabbath instituted. Gradually, over many years, additional laws were introduced which punished vagrants, witches, ‘bastard-bearers’ and those who did not attend church. [1]

Several centuries later the issue of people working on Sunday, became a concern for the Councillors of the Shire of Moorabbin. Market gardeners in the shire were seen to be working on the Lord’s Day and as a consequence John Keys, the Shire Secretary and David Abbott, the President of the Shire and a solicitor by profession, were asked to report on their understanding of the law regarding Sunday work. [2] 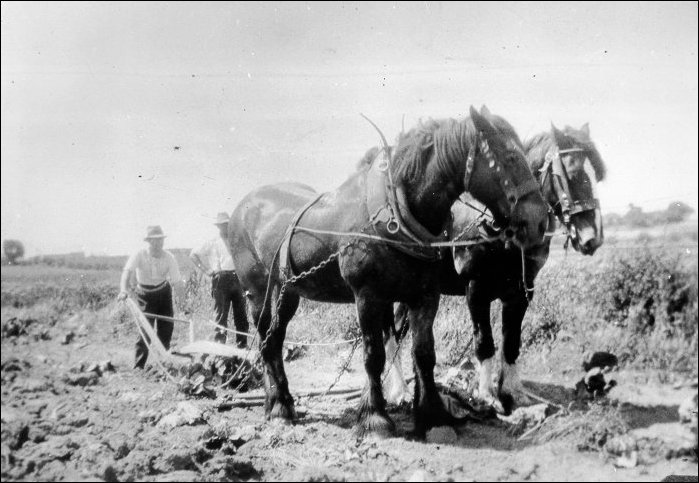 The traditional horse drawn plough used in Moorabbin in the 1920s.

Abbott and Keys pointed out that there were two laws that were relevant. In Victoria the Police Offences Act of 1890 made it unlawful for any house, shop or store to open on a Sunday to trade. If the case was proved, the guilty person involved could be fined up to ten pounds. There were exceptions. Apothecaries and chemists could be open at any time of the day and there were special provisions for butchers, bakers, pastrycooks and confectioners. Both men thought that this Act did not apply to market gardeners but their reasons are not recorded in Council minutes. However they indicated that, in their view, it was not within the scope of local government to create bye laws on the matter.

The second relevant law, called The Lord’s Day Act, was passed in 1676 during the reign of King Charles II, more than two hundred years before Europeans settled in Australia. Nevertheless, as Victoria in 1894 was a British colony this English law applied. The Act stated:

“...that all and every person and persons whatsoever shall on every Lord’s Day apply themselves to the observation of the same by exercising themselves thereon in the duties of piety and true religion publicly and privately; and that no tradesman artificer workman labourer or other person whatsoever shall do or exercise any worldly labor business or work of their ordinary callings upon the Lord’s day or any part thereof (works of necessity and charity only excepted) and that every person being of the age of fourteen years and upwards offending in the - premises shall for every such offence forfeit the sum of five shillings; and that no person or person whatsoever shall publicly cry, show forth or expose to sale any wares merchandises fruit herbs goods or chattels whatsoever upon the Lord’s day or any part thereof, upon paid that every person so offending shall forfeit the same goods so cried or showed forth or - exposed to sale.

In 1863 an English farmer was charged under this law for making hay on a Sunday and fined five shillings. But the conviction was later quashed as the judge ruled that the Act did not apply to farmers. Abbott and Keys believed that market gardeners were in the same category as farmers and therefore the courts in Victoria would not punish them for working on Sundays. Should the Council successfully prosecute a market gardener for working on Sunday and he refused to pay the five shillings fine, the law stated that the guilty person should be placed in the stocks for two hours. Abbott and Keys thought this an “an obsolete form of punishment which in our days would appear ridiculous.” [3]

Almost two years later the question of people working on a Sunday was again raised in Council. Councillors Le Page and Mills asked that the Inspector of Nuisances report on persons working on the Sabbath Day. This was agreed to by the Council but the content of the report and the actions taken were not recorded. [4] Councillor Mills, with the support of Councillor Brownfield, again raised the matter of work on Sundays, on September 1900, but on this occasion the request was for the Secretary to write to the Chief Commissioner of Police drawing his attention to the fact that “Chinese Market Gardeners in this District are in the habit of following their daily occupation on Sunday.” [5] The following month Constable Holland was officially thanked for the actions he had taken to stop this practice. [6] Concern about the prevalence of Sunday work by Chinese market gardeners in the Shire was again an item of business for the Council in 1905 when councillors agreed that the attention of the police should be drawn to the custom. [7] Subsequently, however, they accepted the proposal that “when the engineer deems it necessary the day men be called out for Sunday work unless they have conscientious scruples.” [8] 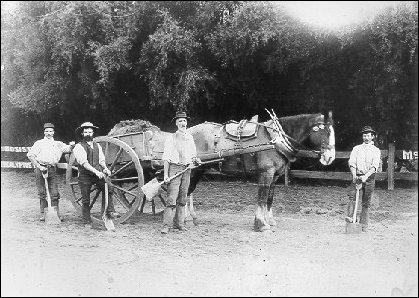 Day men of the Shire of Moorabbin working on the construction of the Sandringham Oval c1900.

It was not for many years that the contentious issue of people working on Sundays was the subject of legislation by the Victorian Parliament. Today a wide range of services are available on a Sunday requiring individuals to work.