A sign in Mentone’s main street points the way to the Hogben-Meckiff Oval and another not far away indicates where to find the Walter Meckiff Hall. The names on the boards give a hint that the Meckiff family made a contribution in this suburb and that the story is worth telling. The tale has its origins in the early years of last century.

It begins in 1910 when Frederick Whitehead brought his family to live at 36 Milan Street Mentone, in the holiday house he and his two sons had erected. Fred also had a nine-year-old daughter, Vera May, who grew up in the town and went to school at Mentone Primary. When she was a young woman in the early 1920s she could not help noticing a strapping young man who had moved into 44 Milan Street with his parents. His name was Walter John Meckiff. Walter eventually courted Vera and the two married in 1931, moving into a house at 34 Milan Street next door to her parents. Walter’s family lived just up the street, an illustration of the small town relationships that existed here in the twenties. 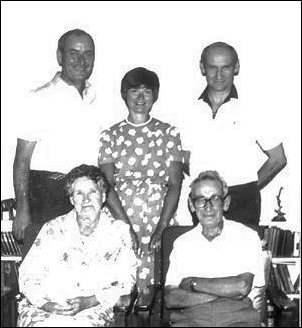 Vera and Walter Meckiff on the occasion of their Golden Wedding Anniversary with family members, Ian, Margaret and Don, 1981. Courtesy Don Meckiff.

Walter and Vera had three children: Don (born in 1932), Ian (1935) and Margaret (1940). Don and Ian came into the world in the front bedroom of the Milan Street home, but Margaret was born at Strathaven Private Hospital in Warrigal Road.

All three children went to the Mentone Primary School and then on to Mordialloc-Chelsea High School. In 1941 when HMAS Sydney went down with over 600 men lost Don and Ian sent two shillings of their pocket money to the national appeal for funds to replace the warship. The boys remember the schoolyard trenches and the typhoid epidemic of the war years but their major memories concern sport. Even though they did well at school and all became prefects at the high school (Don was 1948 Head Prefect), the Meckiff name was to become associated mostly with sporting exploits from that time on. Don and Ian represented Mordialloc High at athletics, swimming, football and cricket, while their sister, Margaret, played softball for the school team. However, sport was to be much more important in their lives in the years away from the school scene.

Don and Ian joined the Mentone Under 16 cricket team in 1946 when they were fourteen and eleven respectively. At season’s end they found themselves in a Grand Final against Moorabbin in the old Frankston- Glenhuntly competition and in the happy position of needing only 12 last innings runs with just two wickets down to win the premiership. But disaster struck. Mentone lost eight wickets for ten, with Ian scoring six of those scarce runs. That loss has remained indelibly carved on the Meckiff boys’ minds for over half a century and explains their tough-minded approach to sport since that time.

The brothers continued in the Under 16 team with Ian playing for a further four years and helping to win three consecutive flags, starting with the 1948/9 win. It may come as a surprise to cricket followers to learn that in this period Ian Meckiff was a left-arm spin bowler. His ‘leggies’ certainly bamboozled many batsmen. In one game he took nine wickets for one run. He routed whole teams, took a hat trick, and his 200 wickets were gained at an average of just over 4.5. Ian rarely had to bat because the other side was usually out for a tiny score and Mentone’s top order bats quickly wiped off the runs needed. On one of the occasions when Ian did bat he knocked up 103. He went to South Melbourne District Club in 1951/2, changed to fast bowling, and quickly went from the fourths to the firsts before gaining State selection, and then Test status. 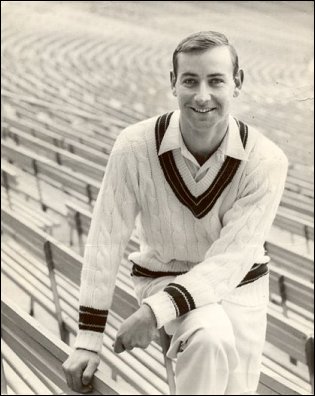 Ian Meckiff’s Test career is recorded fully in other places and I will not try to detail every aspect of it here, but some key points need to be made. Ian’s first Tests were in South Africa in 1957/8 and when he came home he gave talks locally, one at the Mentone Presbyterian Church. He made reference during the slide show to his disgust at the treatment of black South Africans in the days of apartheid. The next year he routed England at the MCG in the New Year Test, taking 6/38. This eventually led to complaints by some English cricket writers that his action was suspect—that he was a chucker. In the next five years Ian played many Test and State matches. His 18 Tests brought him 45 wickets at 31.62, and in all first class games he took 269 wickets. His batting was not so remarkable though he scored 45 in a Test against India. Perhaps his most famous effort with the bat was his important contribution to the first-ever tied Test Match, in 1960, when West Indian Joe Solomon ran him out going for the winning run with nine wickets down. Then came the controversial match against South Africa at Brisbane late in 1963. Col Egar, the Australian umpire who had watched Meckiff for years, called him for throwing a number of times and the captain, Benaud, had no option other than to stop bowling him. This effectively ended Ian Meckiff’s career. There were many who thought the authorities had conspired to do just that, but no-one would admit anything and Ian dropped out of the game. He did return later as a commentator on TV and radio where he showed himself to be a pleasant and far from bitter sportscaster.

Don Meckiff, after a stint with the athletic club in 1948/9 (He had earlier won the Victorian Schoolboys Long Jump title), went back to cricket the next year and had a long and distinguished career at Mentone. He had shown promise as a fast bowler by taking all ten wickets for seven runs in a match against Ormond in the juniors, one of only two Mentone players ever to take all wickets in an innings. After that 1947/8 success there were many seasons of quick bowling to come, as Don represented Mentone at all levels until 1985 when he retired from the Veterans Eleven after 350 games with the club.

He holds the record for the most wickets by a Mentone player, over 1150, and is recorded in the club’s history as the most valuable club member ever. Don played in the firsts from 1949/50 until the early sixties and then captained the seconds, winning a flag in 1965/6. He then played in lower grades for twenty more years, captaining more premiership sides.

Don Meckiff’s other contribution was in administration. He served on the committee for many years, was president during the seventies, and chairman of selectors for 15 years. Later still he prepared the club’s turf wickets, coached junior teams, and also tutored the women’s team at the club. Finally, Don had a stint at umpiring in the Federal Association. He fully deserved his awards: best clubman at Mentone and life memberships of his club and the Federal District Cricket Association.

The Meckiff name and ‘cricket’ seem to be an enduring association, but the boys excelled at football as well. In the fifties Don played in Richmond seconds, including a final series at the MCG, and Ian was sought by many VFL clubs, but would not sign because he had a dream of playing Test Cricket for Australia. 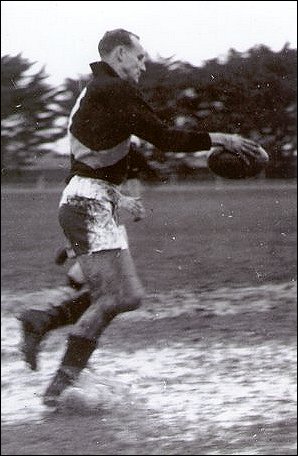 The brothers played in Mentone’s dominant Under 18 teams from 1948 until 1952. Don began two years before Ian, but the two played in Mentone’s undefeated premiership team of 1950 under Don’s captaincy. The team was brilliant with Peter Schofield (full forward), Alan Mennie (rover), Gavin Hoare (centre) and Ron Banfield ( centre half forward) playing the key roles. All four later played with VFL clubs. Ian enjoyed two more flags in 1951 and 1952 when Mentone lost only one game in the two seasons. In the mid-fifties both Meckiffs played senior football at Mentone as the club moved up the ladder under coach Jim Baird, the ex-Carlton player. Finals experience in 1954-5 blooded the team for the exploits of 1956 when the Olympics made sport the centre of Melbourne’s life.

Mentone Tigers won nearly every game in 1956 and played a draw in the second semi-final against Dandenong who were no match for them in the replay. The Grand Final against the tough Mordialloc side at Cheltenham was the stuff that dreams are made of and the Meckiffs were a big part of it. At the last change Mentone was down by over two goals and the premiership looked to have slipped from their grip. Coach Bill Gallagher made a bold move by pushing Ian Meckiff from the ruck down to full forward. The Tiger defence, with Bruce Gatford, Mick Beckwith and Don Meckiff holding Mordialloc goalless, sent the ball down time after time as Ian marked often and kicked four goals in the term for Mentone to snatch a nine-point win. The supporters went wild and the club celebrated for a long time.

In a rare coincidence Mentone’s only senior football premiership teams to that time, in 1928 and 1956, included Mentone Cricket Club’s only two Test players, Leo O’Brien and Ian Meckiff. Leo was full back in the 1928 team.

The Meckiff story cannot be concluded without returning to where it all began - with Walter and Vera who made it possible. The older Meckiffs were staunch supporters of the Davies Memorial Presbyterian Church in Mentone. Both played tennis, taught Sunday School, and worked on committees for nearly half a century. Walter was Superintendent of the Sunday School for 40 years and an Elder of the church for longer than that. It is not surprising that the church hall in Eblana Avenue was named after him. Walter also acted as a volunteer fireman during the war while Vera worked for the Red Cross, and later in the Southern Opportunity Shop. Both became foundation members of the Mordialloc Historical Society in 1963. Walter coached junior teams and, like his sons, was made a life member of the cricket club. He had the pleasure to see all his four grandsons (Andrew, Wayne, John and Scott) play cricket for Mentone.

The Meckiff name seems to go well with Mentone but none of them live here any more. Don and Judith Meckiff now live in Beaumaris as do Ian and his wife, Lorraine, who was a member of the Moore family, the Parkdale bakery owners of earlier days. Their sister, Margaret, became an Arts and Craft teacher and she took up a career in Canada where she has settled with her husband.

The Meckiff sporting story is far from over as we start a new century. Don is Chairman of Selectors at Mentone Bowling Club, having moved his sporting focus a few hundred metres north of the old arena that bears his name. Ian has concentrated on golf and played off a three handicap for some time. He represented Victoria Golf Club in Division 1 Pennant teams and was club captain for several years in the late 1990s.

Despite their pursuit of successful business and professional careers both Don and Ian, together with the other Meckiffs, have given much to the Mentone and local district communities, especially in areas associated with youth participation in sport. The City of Mordialloc gave Don its Citizen of the Year Award in 1980 and all the Meckiffs were honored when Mentone Oval received their name alongside that of their cricketing colleague, Stan Hogben, in 1988. Walter and Vera must look down with pride.