Two Acre Village was the name given by Josiah Morris Holloway to a portion of land he bought at auction on May 11, 1852. He paid £938-11-9 for 625 acres 2 rods 36 perches of land which today is contained within Nepean Highway, Centre Dandenong and Chesterville roads and land facing Bernard Street. [1]

He sub-divided this land into 370 allotments and quickly made them available for sale. An Argus advertisement in March 1853 noted that the land was wooded, had access to water, contained clay suitable for brick making and was only a short distance from Brighton. The presence of bay views and government roads was also advertised, along with the fact that a portion of land was set aside as a reserve for the erection of a National School at a later date. Many of the blocks were two acres in size, giving the sub-division its name, but there were exceptions. The blocks fronting onto the Government Road - Coast Road to Western Port and Arthur’s Seat were smaller in size. For example Lot 39 was 1 acre 0 rods and 3 perches and Lot 345 1 acre 3 rods and 37 ½ perches. A few were irregular in shape. [2]

Land sales of Two Acre Village. The orange blocks sold for £20 and the blue for £10.

Land sold quickly. Some land changed hands the same day, indicating strong demand. The original price for most blocks was £20 but Lot 1 and Lot 14 sold for £35 and £30, respectively. Some internal blocks fetched £10 each. Many of the original purchasers were land speculators who had no intention of working or living on the land. John Masten Llewellen purchased twelve blocks fronting on to Johnstone Street (later renamed as a continuation of Wilson Street). He paid £240 and these blocks were sub-divided into 78 allotments served by three streets named McIvor, Goulbourn and Bendigo. By September 1857 twenty nine of these blocks had been sold for a total of £223-13-6 so that he recouped nearly all his purchase price by selling less than half his land. He also bought four lots in Bernard Street which he sub-divided. [3]

James Robert Hornby purchased three allotments in what is now Centre Dandenong Road for £60 in December 15, 1853 [4]. He subdivided this land into more than thirty blocks which he commenced selling only days after his original purchase. By August 15, 1854 he had sold twenty-five blocks to eight buyers for a total of £77-9-0.

Not all buyers were interested in reselling in the hope of making large profits. Some were seeking land to cultivate and on which to build a residence and raise a family. Nicholas Le Page purchased Lot 95 on January 30, 1854 on the Government Road later named Chesterville Road and there he built his weatherboard house. [5] The price of the land was £20. A little more than ten years later he purchased Lot 97 on the corner of Chesterville Road and Bernard Street from Fred Goss for £15 and the Le Page descendants continued to purchase land on Holloway’s sub division. His son, Francis Thomas Le Page, bought Lots 62, 63 and 64 on the corner of Bernard and Wilson streets on January 18, 1883 for £180 to build ‘Daphne Cottage’ and raise his family. Over the next few years he added Lots 66, 67, 68 in Wilson Street and Lot 79 in Argus Street to his holding. Francis’s son, Everest Thomas Le Page bought five lots of land in Chesterville Road from the Tuck family in the early 1940s. The first lot in September 1940 was gained for £125 and subsequent purchases in 1943 were £500 each. After the death of Everest Le Page much of this land was sold to developers in 1973 to create the housing development known as Pagewood Park, but the section on the corner of Bernard Street and Wilson Street where Francis and Mary built their home in 1876 was given by their grandchildren to the City of Moorabbin to create a park for the use of “the people of the municipality” [6]. The park is known as the Le Page Gardens. 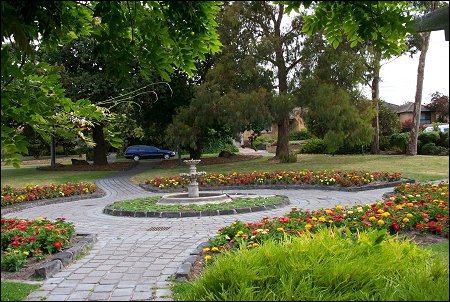 Charles Whorral paid £20 for Lot 13 on Schnapper Point Road, one block from the corner with Centre Dandenong Road where he built a hotel which he named the ‘Cheltenham Inn’. According to Sheehy it was a small building providing a meeting room for the local people which was separate from the bar of the building. [7] Whorral named the inn purely out of nostalgia for his native town in England. By 1856 it was this name which came to replace the title of Two Acre Village, but by then Whorral had left. On March 8, 1855 he sold his land and hotel to Harry Jenkins who two days before had bought the lot on the corner of Schnapper Point and Centre Dandenong roads for £35. [8] Later a larger hotel was built on the land to serve the community for many years. In 1886 the hotel was taken over by Charles Keighran where he “provided good accommodation for from forty to fifty visitors”. [9] Early in the 1930s the building was demolished, but before that occurred the business had been delicensed as a hotel and conducted as a coffee palace by Mrs Walker. She provided accommodation and meals for men working in the district or travellers passing through. [10]

The original grantee of the land, Josiah Holloway, unfortunately died in a police cell at Ballarat after being arrested for drunkenness. Just a short time prior to his death he disposed of all the remaining unsold land at Two Acre Village to the estate agents William Gledhill & Emanuel King. They in turn sold lots 273, 275, 276, and land previously reserved for a National School, to Thomas Bent who at different times was Rate Collector in the Shire of Moorabbin, President of the Shire of Moorabbin, Mayor of Brighton, Minister of Railways and Premier of Victoria. Bent paid £29-10-0 for this land on July 16, 1879 and almost immediately transferred ownership to Francis Joseph Cramling for £40. [11]

While in general the price of land in Two Acre Village continued to increase, the values fluctuated and there were times when land was sold at a loss. Margaret Alexander purchased two allotments on December 16, 1853 on the government road between Cavanagh and Herald streets for £40 and sold it for twice that amount three years and two months later. The purchaser, Benjamin Huntsman, held the land for twenty one months before selling it to Alfred Caffin for £130. After a little more than two years the ownership of the land again changed. Caffin sold the land to William Woff and Lindsay McCurry for £300. [12] What improvements were made to the property from the time Alexander first purchased the land from Holloway to the time that Woff and McCurry took up ownership is not known. Perhaps a substantial part of the increase in value was due to improved fencing and drainage, and the erection of buildings which added to a general rise in property values throughout the parish.

Lot 209 on the western side of Cavanagh Street near the corner of Centre Dandenong Road was sold by Josiah Holloway to William Vaughan for £10 in January 1854. Vaughan sold it to William Gott two months later for £25. Ownership passed to Sarah Gott in 1870 for £10 and she sold it for £55 two years later. Miss Gott was the teacher at the Church of England School No 127 in Silver Street which was closed after the Board of Education refused to continue its financial support and the building became dilapidated.[13] John Peter Brookes owned the property for four years before selling it to Amelia Whitehead in 1877 for £55, the same price that he himself had originally paid. Amelia Whitehead had just returned to Cheltenham with her husband, George Whitehead, and the rest of her family from the Carrum Swamp where George was a Crown grantee. George died in January 1898 and in December of the following year Amelia sold the property to William Percy Fairlam for £6. Rate records for the Shire of Moorabbin in 1878 indicate a four-roomed house was built on the land. The sale price to Fairlam shows Amelia Whitehead suffered a substantial loss by selling the property but it was at a time when land values had not recovered from the severe depression of 1893, when many banks failed and people lost their investments and cash deposits. Nevertheless, Fairlam was able to more than recoup his investment when he sold the property to Julia Wilson Ward for £15 in May 1902. By 1908 land values were again rising which is reflected in the price paid for the property by Grace Blamey Lane. She paid £50. [14]

While some purchasers had the financial strength to pay cash for the land, others borrowed money to achieve their goal of land ownership. On January 29, 1918 a contract of sale was signed between Laura Elizabeth Lake and James Gray for £725 involving the purchase of three pieces of land, Lots 184 185 & 186 on the corner of Herald Street and Centre Dandenong Road. The contract detailed the conditions of sale. A deposit of £3 was paid at the time of signing the contract, a further £2 was paid within 48 hours, and an additional amount of £145 within 3 weeks. The balance was to be paid at the rate of £50 per year for the period of 10 years when the remaining £75 had to be paid, making a total of £125 on 10th year. All unpaid principal was to bear interest at 6% to be paid quarterly, and possession was given in one month. [15]

Over the years, the land usage of the 625 acres 2 rods 36 perches purchased by Josiah Holloway and named Two Acres Village has radically changed. Today there are few two-acre allotments. Almost all of the original lots have been sub-divided for residential purposes. Roads have been made and others renamed. Patrick Street is now Jellicoe Street and the name Johnstone Street has disappeared. The original vegetation has been removed. Market gardens and flower gardens that once flourished have disappeared along with poultry farming and cattle grazing. While those rural aspects have gone the basic road plan of Holloway’s purchase and some of the names he gave the roads remain.

Aerial Photograph of a section of Two Acre Village, 1964.