The Vietnam War barely rated a mention in the local press even though there were men from the district conscripted into the Australian army to serve there. The News left reporting on this national and international event to the Melbourne dailies.

Conscription was introduced on November 11, 1964 and based on a ballot of twenty-year-old men, the first being conducted in March 10, 1965. It was during the next month that Prime Minister Menzies announced that Australian troops, including conscripts, would be sent to fight in Vietnam beside American and South Vietnamese allies. This generated a strong reaction amongst many members of the community and resulted in a ferment that persisted for several years, touching many individuals and families in the local community.

Mr Frank Mount, a Southeast Asian correspondent of News Weekly spoke to the Bentleigh Young Liberals in June 1971, and was reported in the Moorabbin Standard as saying that “the war in Vietnam was ‘over’ and that the North Vietnamese would be unable seriously to threaten South Vietnam for another six to eight years.” He also spoke of the improved morale of the troops. [1]

Mount’s views were challenged in a letter published the next week. Pauline Mitchell pointed out that no one was winning in Vietnam as casualty figures on both sides of the conflict had reached astronomical figures. Eight Australians, she claimed, were killed in one week. She saw it as a rotten war and one to be got out of as quickly as possible, urging members of the community to attend a ‘Moratorium’ to be held at the Moorabbin Town Hall, to demonstrate their opposition to Australia’s involvement. 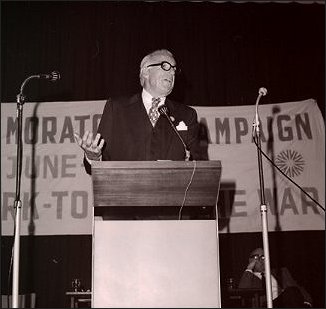 Dr Benjamin Spock, whose books were the source of advice on child rearing practices to many Australian parents, was the key speaker at the anti Vietnam War protest rally, held at the Moorabbin Town Hall on June 13, 1971. Dr Jim Cairns chaired the meeting supported by Bob Hawke, as president of the ACTU, and Councillor Les Coates from the City of Moorabbin. Spock urged his listeners to do what they could to end the war. “If politicians begin to get mail against them it sends cold shivers down their back,” he said. He also suggested that civil disobedience had its purpose in opposing violent governments. In general his presentation was assessed as “friendly but not inspiring” still, as the reporter wrote, “it was a new experience to watch a famous American damning his homeland’s infamy and smiling his acknowledgement of the people’s cheers.” [2] 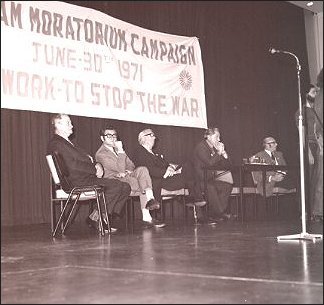 The same News reporter noted people attending the meeting had to pass by “two mini-skirted young girls with the swastika flag stretched between them, looking a bit unhappy, and the brown-shirted young man ‘carrying-on’ through his loud hailer at the rear.” For this reporter, they formed a slightly embarrassing barrier in Moorabbin on a sunny winter afternoon. 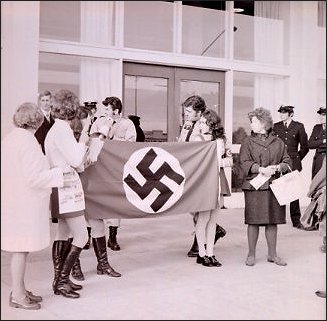 The audience, estimated as being 1500 strong, listened to the anti Vietnam War, anti conscription speeches and contributed to a fighting fund to promote the cause. They did this by dropping their donations of coin and folding money into plastic ice-cream buckets being passed around the audience. This the reporter saw as a good outcome.

Concluding his article, the News reporter deemed the meeting a success as no one in the hall messed up the cordial atmosphere by yelling, “Go Home Yank” and the funds for the Anti Vietnam War protest got a big boost. 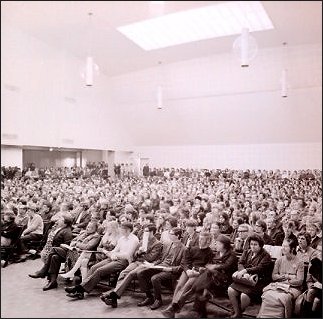 Subsequent issues of the Moorabbin News rarely mentioned conscription or the Vietnam conflict although American combat troops were not withdrawn until 1973 and the tussle between the North and South Vietnamese forces did not cease until April 1975. One exception was in September 15, 1971 when Barry Johnston as the endorsed Australian Labor Party’s candidate stood against the Minister of Customs, Don Chipp in the Federal election. The News announcing that a young primary school teacher was challenging Chipp pointed out that Johnston had been a prominent campaigner against conscription and had been jailed for refusing to comply with the National Service Act. He was quoted as saying, “The outcome of the Vietnam war and Australia’s shameful participation in it vindicates all who have opposed it … any honorable man was duty bound to oppose it.” Johnston failed to unseat the sitting member for Hotham. [3]

While the contribution of Australian men and women in the Vietnam conflict is recognized nationally no public memorials have been erected in the City of Kingston. 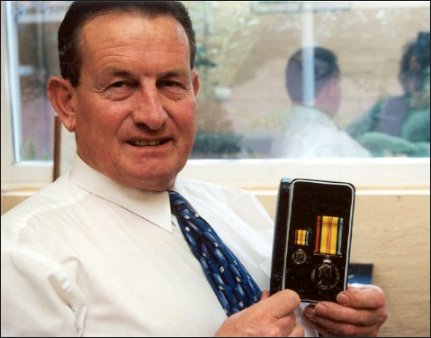 Dr Peter Nelson with Vietnam War Medal awarded in recognition of his service at a hospital in Longxuyn. Leader Collection.