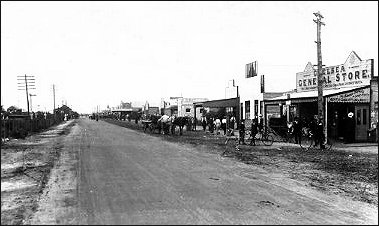 The main street of Chelsea in 1917, looking south towards the railway station on the left. The future site of the hotel is on the right. Courtesy of Chelsea and District Historical Society.

The proposal to build a fifty-two-room hotel at Chelsea in 1913 divided the community. Meetings were held where those from both sides of the argument – for and against – attempted to persuade the uncommitted or waverers to join their cause. Lengthy letters, not always reflecting logical argument, or charity, were published in the local press generating a great deal of copy for the News with claims and counter claims.

At a well attended public meeting in July 1913, mainly consisting of supporters of the movement for a local hotel, J B Davis, the chairman for the occasion suggested the hotel was absolutely necessary, for without it Chelsea would have sly grog shops. One argument advanced for the proposal was medical. In the case of sudden sickness, or accident, access to spirits was vital and with the summer influx of inhabitants numbering many thousands, sickness, accidents or partial drownings were sure to occur it was claimed. Therefore it was necessary to have some place where liquor could be procured quickly in order to save life. [1]

Mr Farthing, a local parliamentarian, was warmly received by the audience when he spoke in support of the case for a hotel at Chelsea. In his presentation he compared the progress and decay of Christian and Mahomedan races attempting to prove that where no liquor licenses existed evil resulted. “Drunkenness increased in those countries where hotel hours were curtailed,” he asserted. He pointed out that of eighteen alcohol prohibition states in North America all but three had returned to the old system of licences. [2]

About two hundred people listened in a local hall as J G Barrett presented a counter argument to that advanced by Mr Farthing the previous week. They heard Mr Barnett challenge information presented as fact by Mr Farthing about the situation in New Zealand, United States of America, and more locally at Wonthaggi and Mildura. Barrett quoted statistics on liquor consumption and linked it to hospital attendance, death and marriage breakdowns in both France and Germany. [3]

‘A Man’ filled a full column of the News expressing his views in favour of the proposal and scorned the arguments of the opposition, “a small coterie qualified neither by education, social standing, or the example they set.” He added, “to obtrude themselves as leaders of public opinion, reaches the height of impertinence …Their overpowering conceit blinds them to any sense of proportion.” [4] He went on to suggest that ‘no license’ agitators were not concerned with sly grog selling, the barrels of beer in camps or the bottles kept for business in the houses of those who would deny the right of citizens to an hotel. ‘A Man’ believed an individual was less likely to over indulge in a public setting where his behaviour was subject to scrutiny and exposure as weakness, in contrast to the secrecy of his own home. In conclusion he called upon all serious folk to take a broad view of the matter remembering that restriction invariably created an unnatural appetite.

Jas James, the Hon Treasurer of the Chelsea No-License Committee, took umbrage at the “sneers and veiled but scurrilous innuendos reflecting on the social position, education and public and private characters of reputable citizens.” [5] He thought the attack by ‘A Man’ was, “more in keeping with something that has neither legs nor hands, and has to crawl upon its stomach.”

‘Another Man’, neither a Chelsea resident nor a teetotaller, wrote in response to the correspondence of ‘A Man’ to show the other side in a sense of justice. Acknowledging ‘A Man’ had a perfect right to his opinion, nevertheless ‘Another Man’ objected to the tone of the letter, its wrath and the sarcasm poured upon people who had the temerity to hold different opinions. To claim these individuals were ignorant, belonging to lower orders of society, and have shameful or disreputable pasts was too strong, he stressed.

In the same issue of the paper, ‘A Temperate Man’ congratulated ‘A Man’ on his contribution while pointing out there were three groups involved in the contest. One was Total Abstainers who were an absolute minority, secondly Temperate people and thirdly Drinkers. He concluded his letter hoping the Chelsea people would vote supporting decent accommodation for visitors. [6]

A poll to identify the views of local citizens to the granting of a licence for a Chelsea hotel was held on August 28, 1913 with 472 people casting their votes. Those in favour of the hotel required a total of 917 votes for the poll to be declared valid. Consequently the ‘No Hotel Group’ celebrated the success of their campaign with F A Terrill, the honorary secretary of the ‘No License Committee’, hailing what he termed a conclusive result for the people, “on one of the most beautiful seaside spots along the coast of Victoria who did not did not want the peace and quietness of the place disturbed by having a licensed hotel placed in their midst.”[7]

Subsequent to the poll a strongly attended meeting of property owners was held at the Kismet rooms to condemn the manner in which the local poll was conducted. Foul play was claimed. At a meeting prior to the poll the ‘No License’ group, with representation from Aspendale, Chelsea and Carrum, unanimously resolved to advise all opposed to the hotel licence to abstain from voting at the poll thus forcing those in favour to reveal their support. Because of this Mr J B Davis, the chairman of the property owners’ meeting said business people and women were afraid to cast their vote because they had to negotiate intimidating pickets of the ‘No-License’ party who could report their presence and consequently cause a future loss of trade. In addition it was argued the rolls were in a poor state and most of the fifty absentees on the Carrum rolls were given little opportunity to vote. Consequently, it was resolved to seek a meeting with the Chief Secretary to state their grievances and establish whether the poll could be declared null and void. Messrs Davis, Billings, Bond and Graham formed the deputation. [8]

The Chelsea ‘No-License Committee’ with friends meet at Caulfield the following month to celebrate their victory. Mr W H Webb, the chairman, presided at the function and in his opening remarks pointed out that people had been drawn to the district, “not because it included the finest piece of foreshore in Victoria but purely and simply because there was no hotel.” Although two parliamentarians, Snowball and Membrey, were present their comments were brief as they had been summoned to attend parliament in Melbourne. Membrey stressed that the fight that was just past and won was insignificant in comparison to the fast approaching skirmish that would occur with the proposed changes in the licensing legislation, scheduled for 1917. Mr Coker in his short remarks urged the assembled guests to stay alert, keep in harness, and thus be organized for any unexpected attack. Councillor Groves took a different approach to the issue pointing out it was the young people who needed to be safeguarded. He felt grown-up persons already saw the effects of intoxication during their lives and should instil in the minds of their offspring the inclination to exclude it from social life. [9]

Within two months Councillor Groves was again embroiled in a controversy over the provision of intoxicating liquors in Chelsea. He presided at a public meeting called to protest against the granting of a club licence for premises near the station occupied by Mr F Lester. [10] Mr Jas James explained that a club of the description proposed would not be conducive to the best interests of the township and he was supported by others who contended that such clubs invariably encouraged drinking and gambling to excess.

Mr J B Davis, who earlier had been in the forefront of those arguing for a hotel, pointed out that members of the proposed club were desirous of having a place where they could engage in social intercourse and if a hotel had been permitted the club would have been unnecessary. Mr E Scott thought those in opposition to the club were endeavouring to clog the wheels of progress of Chelsea saying, “they were imbued with wowserism and it was vaccinated into their very bodies,” and urged those present who didn’t like beer not to block those who did. After all he claimed, “If I don’t like sea-bathing, you can’t shove me into the sea.”

The issue of a hotel was again raised in 1920 when a previous decision of the Progress Association not to discuss the matter was rescinded. It was reported that some members enjoyed the discussion which ‘waxed very warmly at times’ when the meeting got out of control. One individual remarked that it was better than any Picture Show. [11]

Messrs Sangster, Simpson, Kent, Barfoot and Leckie all spoke in favour of the proposed hotel. Arguments rehearsed in 1913 were again advanced together with a few new points. People would come to live in the district, there would be less drunkenness and rowdyism on the trains, revenue would be gained in the district and people would be able to activate their right to choose. Reference was also made to the use of alcohol during the World War One crisis where, the speaker asserted, it saved the men in the trenches. Drawing from this experience he suggested the sale of liquor should be regulated, not banned.

Roy Beadsworth pointed out that while he was not a member of any temperance organization he believed a hotel was not in the best interests of Chelsea. He considered the drink traffic a curse and believed he was supported by medical evidence. It was the ruination of men, he claimed, dulling their brains and playing into the hands of the upper class by keeping the working man down. Homes were ruined with wives and mothers eating their hearts out with anxiety. He said he would always cast a vote against the deadly trade in the interests of humanity. [12]

The debate continued up to 1936 when another poll of residents was taken. On this occasion the majority of those polled supported the granting of a victualler’s licence so the focus of the debate moved from the question “Should a license be granted?” to “Who should receive the legal right to sell alcohol in Chelsea?” But this is another story. 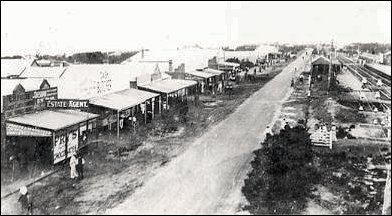