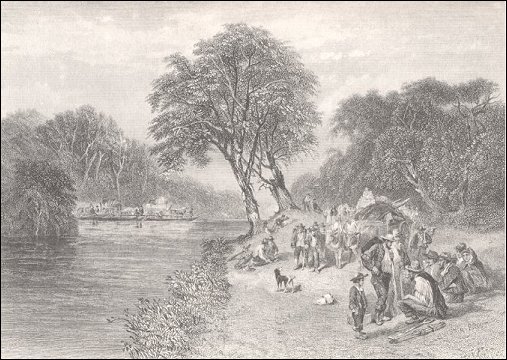 In 1897 the word about the discovery of gold at Cheltenham spread quickly through the community. Rumour had it that gold had been traced in payable quantities on properties off Centre Dandenong Road owned by Messrs Wedd, Allnut, Tilley, Kelly, Hunt and Reaney. This area of undulating hills and light sandy soil covered in ti-tree, dwarf eucalyptus, scrub and bracken was very productive when cleared for orchards and market gardens. But it was a most unlikely area in which to find alluvial gold. Nevertheless Messrs Thomas and Victor Berrie, James Alfred Gartside, James Gartside and Gerald Spencer Gartside took up four mining leases and applications had been made for additional leases. [1]

The indications from four holes spaced over half a mile were not promising. One nine foot hole had filled with water but amongst the surrounding excavated soil, particles of silica were found. The second hole of twenty feet was also full of water but this time there were no indications of quartz in the soil around the hole. The third hole had been filled in because it was bringing down a fence. The fourth hole reached nine feet in depth where it bottomed out on solid rock and struck a spring which generated a flow of water of such intensity, that it constantly flowed from the mouth of the shaft. These various trials led the reporter from the Brighton Southern Cross to conclude “the investment of capital in gold in mining in this locality is hardly advisable until something better has been found than is now showing.” [2]

A geologist from the Mines Department examined two of the workings and reported that neither gave the slightest indication of a lode or quartz. He strongly advised miners not to expend any effort upon the field.

The negative assessments did not deter some of the miners. Mr Berrie of Patty Street believed his claim would turn out well; not perhaps in producing sufficient gold to generate a rush but something more than ‘poor man’ diggings. [3] Gerald Spencer Gartside was confident that the few specks he found on his father’s property near Farm Road would soon accumulated to become ounces of gold as he increased the depth of the mine. [4]

The initial excitement caused by finding a few specks of gold soon died down with the acceptance of the reality that gold was not to be found in Cheltenham in sustainable quantities. The expectations of the miners were not realized.